The city of Wilmington served notice to the landlord of apartment buildings that were condemned earlier this week that 372 code violations will need to be corrected before residents can return.

Twenty-seven rental units on the 800 block of North Adams Street were declared "Public Nuisances" and "Condemned as Unfit for Human Habitation" in an emergency order delivered to landlord A.J. Pokorny Tuesday.

Pokorny would have 30 days from the time of the order to repair most of the damage, although the exterior walls, electrical work, and trash removal are on seven-day time frames.

The commissioner of the Department of Licenses and Inspections does have the right to extend the repair time before a $250 civil fine for each violation would be assessed.

Fourth District City Councilwoman Michelle Harlee said she came to the scene Monday night after being delayed by a Finance Committee vote over the budget.

"When I got there, my main concern was what were we going to do with the people versus trying to figure out what happened at that point in time because that was water over the damn, people needed somewhere to go."

Harlee called for more inspections of rental units, but admitted it can be economically challenging to follow through on the want.

The displaced residents are scattered in several locations including the New Castle County's Hope Center shelter, a local hotel, and family and friends.

Wilmington is paying for the shelter fees, while the state is picking up the hotel bill.

The City says any resident from the Adams Street apartments who still needs shelter should contact the Porter State Service Center.

Wilmington is also planning to open a Help/Resource Center on Thursday at the City's Emergency Operations Center, and will provide transportation.

Harlee told WDEL that they plan to tour some uninhabited apartments in the city, to see if if they could be suitable replacements for the Adams Street residents while the repairs are being made.

She said now is the time for renters in the city to speak up if they are having issues, and that hopefully the inspection count can increase going forward.

"I do think there is an opportunity to look at any habitual landlords that are getting citations over and over and over again. If nothing else, we can work on the system where if that's the case, those are the properties we need to be inspecting."

You can read the complete citation notice to Pokorny here: 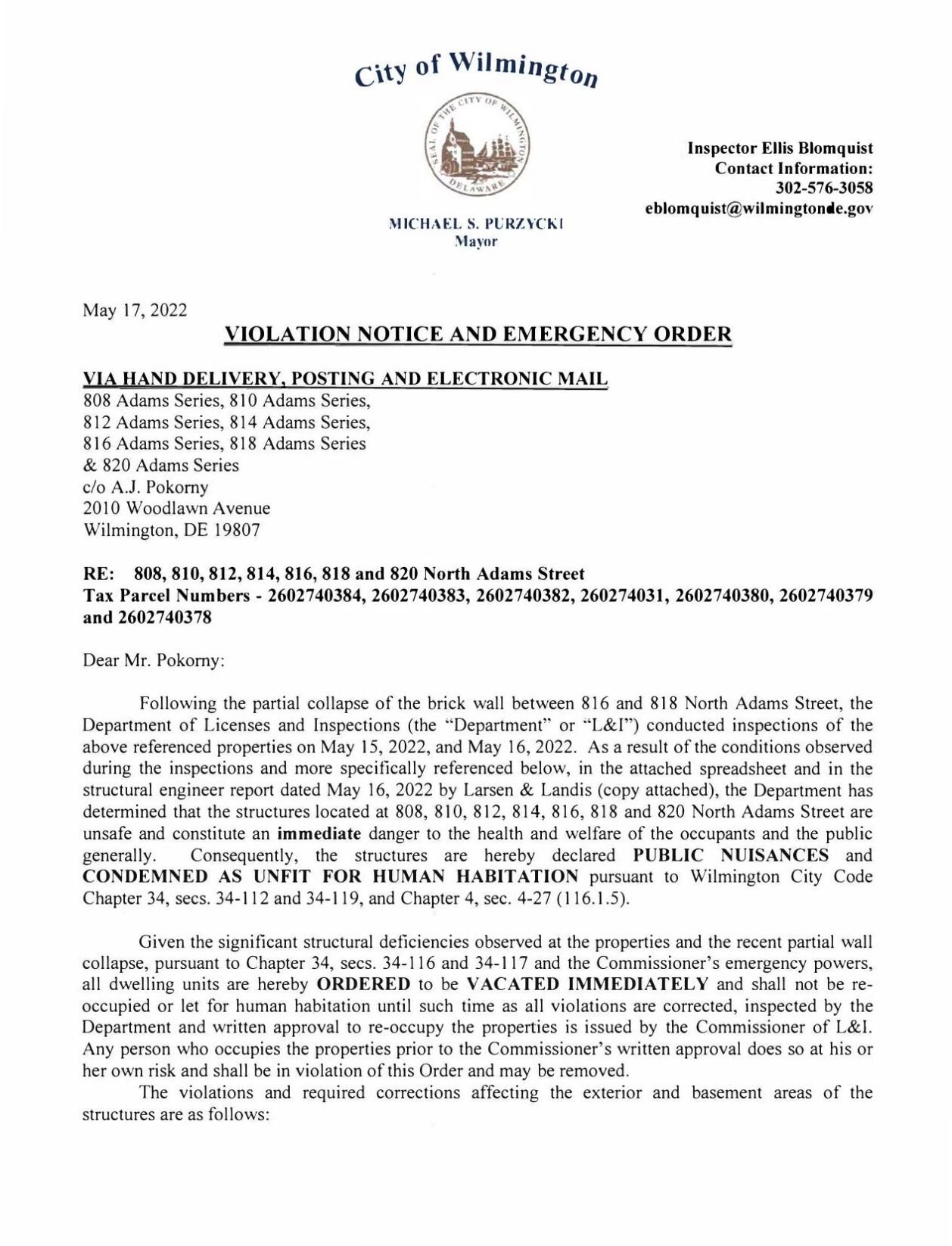