Since the State of Emergency in Delaware, tied to the COVID-19 pandemic, led to stay-at home orders and restrictions on gatherings of 10 persons or less, the Reverend Dr. Christopher Allan Bullock of Caanan Baptist Church near New Castle has been holding services online for between 1,500 and 2,500 congregants.

But the virtual experience, like most things in a coronavirus world, is simply not the same.

After Sunday's virtual service, Bullock said he saw members of his congregation at Target, and that's when it hit him.

Places of worship were never closed; they were always deemed an "essential business," but were greatly impacted by the 10-person limit on gatherings.

Monday, Governor Carney, under the threat of a lawsuit, issued four pages of new guidelines that encouraged virtual service, but allowed synagogues, churches, and mosques to re-open for in-person services on Wednesday, May 20, at 8 a.m., at 30-percent capacity. Upon release of guidelines Monday, services were restricted to one day per week. Now, guidance, posted to the state's website, shows the one-day-per-week limitation for services has been removed. 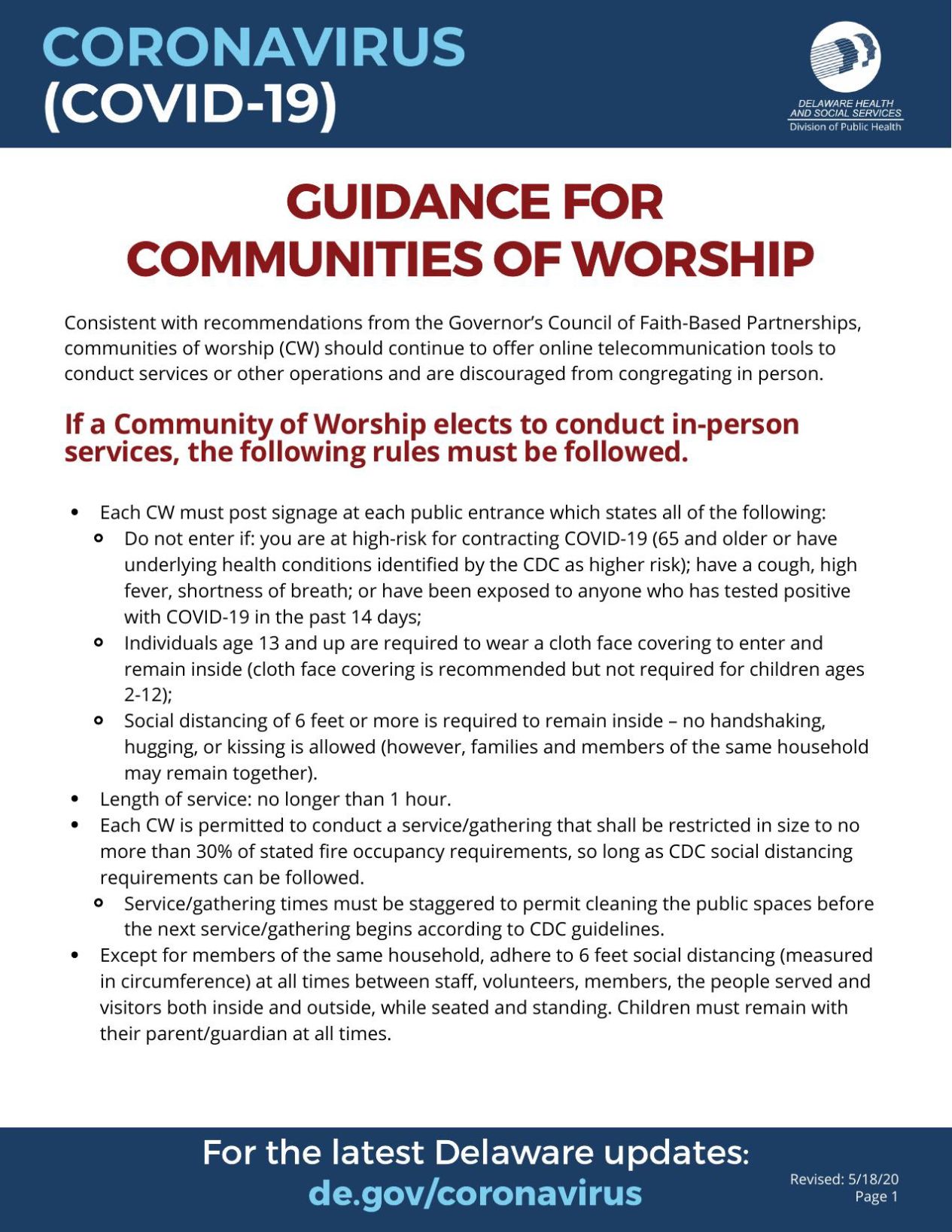 But Bullock has called the guidelines under which they're forced to operate both "intrusive" and "restrictive." He moved forward--as promised--with filing a federal lawsuit in U.S. District Court in Delaware Tuesday, May 19, 2020, challenging the restrictions and calling them "unconstitutional."

"It appears that the state is saying that you have to have an appointment to go to church, and that's not what the Bible says nor is that practical."

Bullock told WDEL the governor's restrictions are a double-standard as he noted hundreds of other industries can reopen without such restrictive guidelines.

"If people are allowed to go to Walmart, to the liquor store...gun shops, to the beach, target, the big-box store, without restriction, why can't the church be open for worship?" he asked.

However, many big-box stores have been limiting entry with long-lines seen outside and signs requiring face masks, though they're not subject to 30 percent capacity rules or curbside pick-up, like smaller shops.

But the lawsuit notes:

"Law firms and chicken processing plants (where a significant number of COVID-19 infections in Delaware occurred), among many others, have no limitations at all, not ten persons, not 30% of fire marshal capacity, just 100% freedom."

"To allow the state to dictate to the church or to the preacher how to long preach, when to preach, how to serve Communion, how to baptize, etc., etc., a certain percentage of people can come in and come out, it appears that the state is saying that you have to have an appointment to go to church, and that's not what the Bible says nor is that practical," Bullock said.

The governor's guidelines also tell persons aged 65 and older, those with underlying health conditions, or those who have cold-like symptoms: "do not enter."

"If they have a pre-[existing] condition, if they are sick, absolutely not. But if they are of good health, take all the necessary precautions, they should be allowed to come in and worship," said Bullock. We are very conscious of the health issue--it's real--we don't want to put anyone in harm's way, on the one hand. On the other hand, we should not be dictated to in terms of how long we can worship and what to do in worship--that's restrictive and intrusive."

A national movement is underway challenging similar restrictions on places of worship in states like California, Michigan, Louisiana, and Virginia.

A demand letter sent to the governor last week by Bullock's attorney Tom Neuberger cites that on Chincotague Island, in Virginia, a pastor was allegedly threatened with jail time and a $2,500 fine for holding a 16-person church service on Palm Sunday, with social distancing guidelines in place. The church sued, and the U.S. Department of Justice has intervened to protect it from was called "illicit religious content discrimination." Matthew Schneider, the special U.S. Attorney reviewing state activities in this regard is quoted as saying:

"Unlawful discrimination against people who exercise their right to religion violates the First Amendment whether we are in a pandemic or not."

But as downward trends in coronavirus cases are seen in some states, public health experts, even Dr. Karyl Rattay, who directs the Division of Public Health have warned reopening too quickly could threaten progress and lead to setbacks.

In California, CNN reported a person, who later tested positive for COVID-19 and attended a church service exposed 180 people to the virus. In a separate case, also reported by CNN in the same article, in Sacramento County, 71 persons connected to the same church, all were ultimately diagnosed with COVID-19. In both cases, it's unclear how well Centers for Disease Control guidelines were followed.

Dr. Bullock said he's working to embrace the CDC guidelines before Caanan Baptist Church reopens--which won't be Wednesday. Due to the size of the facility and the congregation, with between 900 and 1,000 congregants at a regular, unrestricted, in-person Sunday service, Bullock said they're taking steps to do deep-cleaning to ensure in-person worship is safe.

"We're preparing pews, getting ready to put the signage up, all of the washing hands stations...we are taking every precaution...we'll have to remove hymn books and...anything that deals with human-to-human contact, we have to address that. We have to look at what does it mean to be six ft. apart in a pew, what does social distancing mean in the light of the church," he said.

Neuberger first raised the notion of a lawsuit last week, after sending a demand letter, but awaited the guidelines, before filing in court.

Bullock said opening places of worship at 50 percent capacity in Delaware would be a "good start."

"There are unlimited restrictions on other businesses and entities, but yet the voice of the people, the voice of morality, the voice of love, and power, and hope, in these times...the church needs to be open, and people need to be blessed by what the church, or the synagogue, or the mosque offers to those people," he said, "We have to stand up on our conviction and not allow the state or any other government official what we can and cannot due as it relates to worship."

A spokesman for the governor didn't immediately return a request for comment.

This is at least the second legal challenge to coronavirus restrictions the governor is facing. A Dewey Beach condominium owner filed a federal lawsuit May 15, 2020, challenging the state's ban on-short-term rentals.

Places of worship permitted to hold services at 30 percent occupancy, but that won't stop a federal lawsuit

Churches, synagogues, and mosques will be able to hold services at 30 percent of their estab…

They're calling themselves the "Committee to Save Christmas," and they're threatening legal …

Places of worship can now hold their religious services outdoors with no restrictions on gatherings or the ages of participants.

A lawsuit challenging the governor's ban on short-term rentals as part of coronavirus restrictions will go forward, despite the ban being lift…

A federal judge has denied an emergency attempt to stop limits on religious services in Delaware, issued by Governor John Carney, tied to the …

Settlement reached in lawsuit over coronavirus restrictions on places of worship

A well-known New Castle-area pastor has settled his federal lawsuit against the state over coronavirus restrictions on places of worship, avoi…

'Outside of the state's power' | Carney sued by Wilmington, Townsend churches over pandemic restrictions

Should religious institutions be permitted to host gatherings amid a global pandemic?

Religious freedom case plays out in Del. Court of Chancery

A Delaware Court of Chancery Vice Chancellor is considering arguments raised during a three-hour hearing on a religious freedom case that resulted from restrictions imposed early in the COVID-19 pandemic.

Copyright © 2022 Forever Media, Inc. All Rights Reserved. Forever Media and Its affiliates and their Radio Station(s) do not and shall not discriminate, in any manner on the basis of race, ethnicity, religion, gender, or age respecting their recruiting, employment or advertising practices.  | Terms of Use | Privacy Policy
Powered by BLOX Content Management System from BLOX Digital.