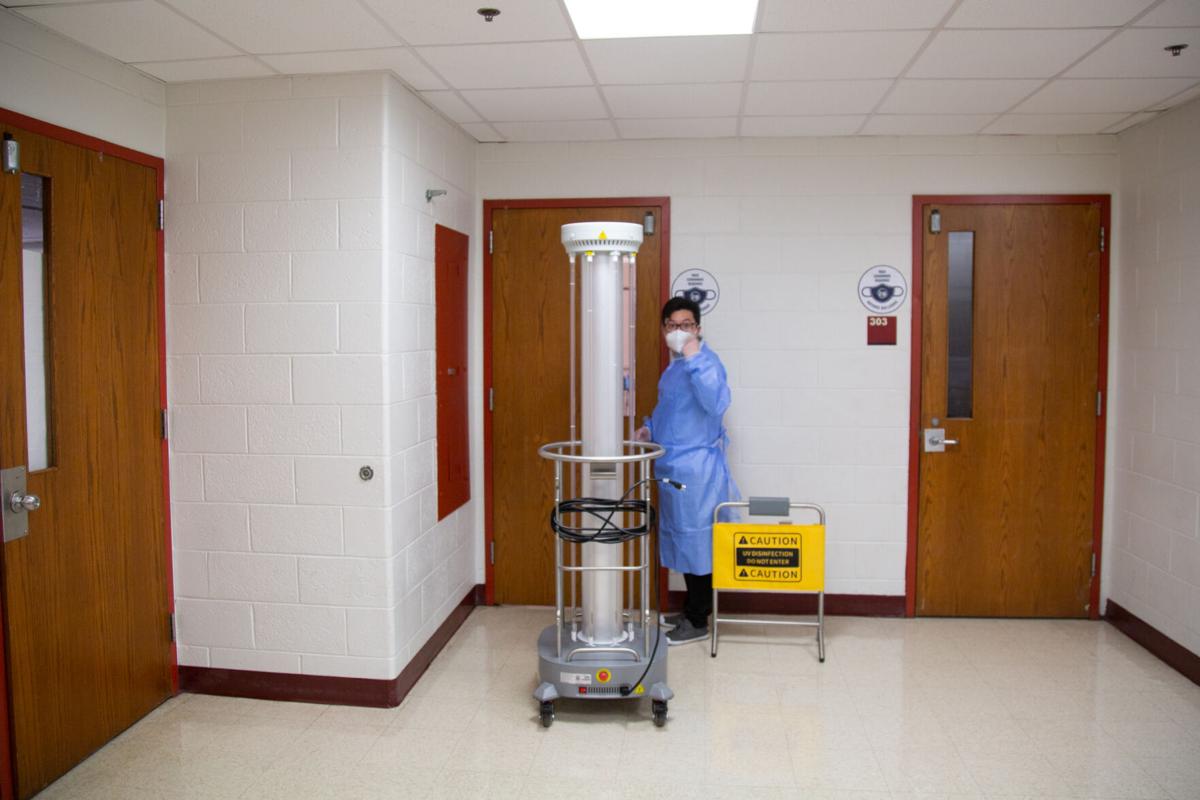 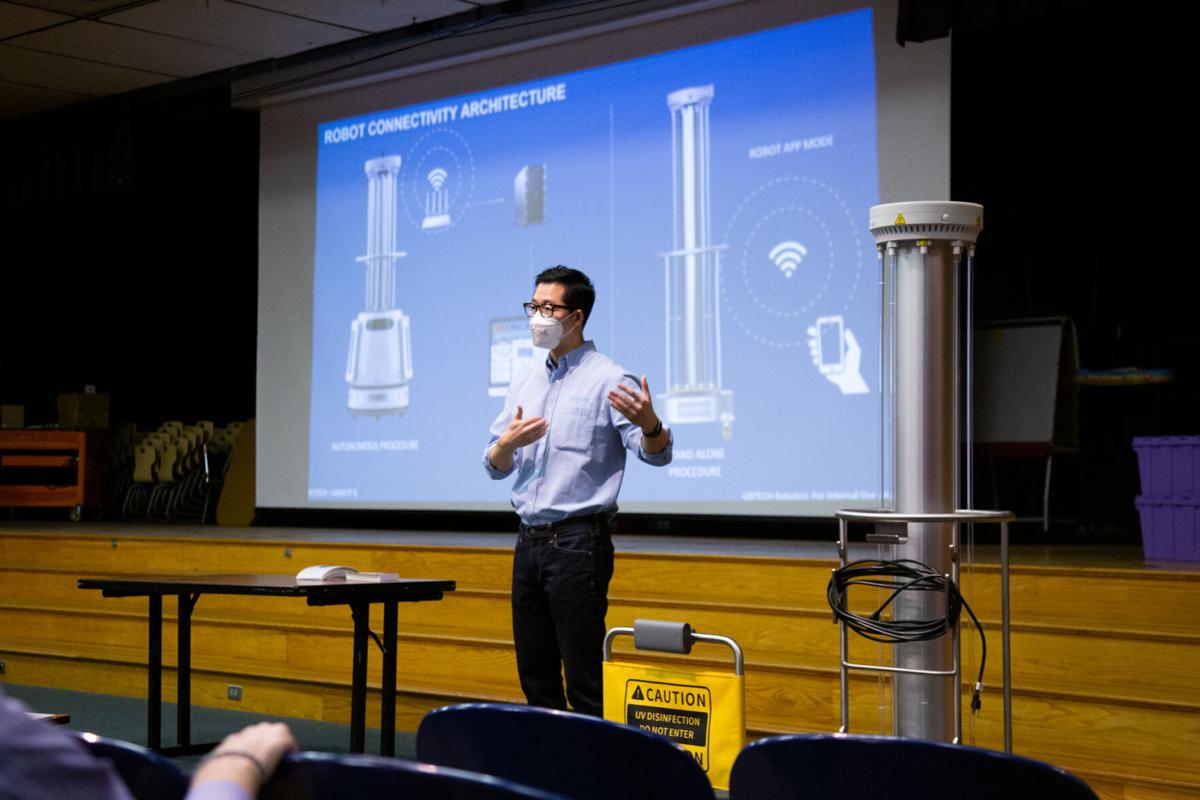 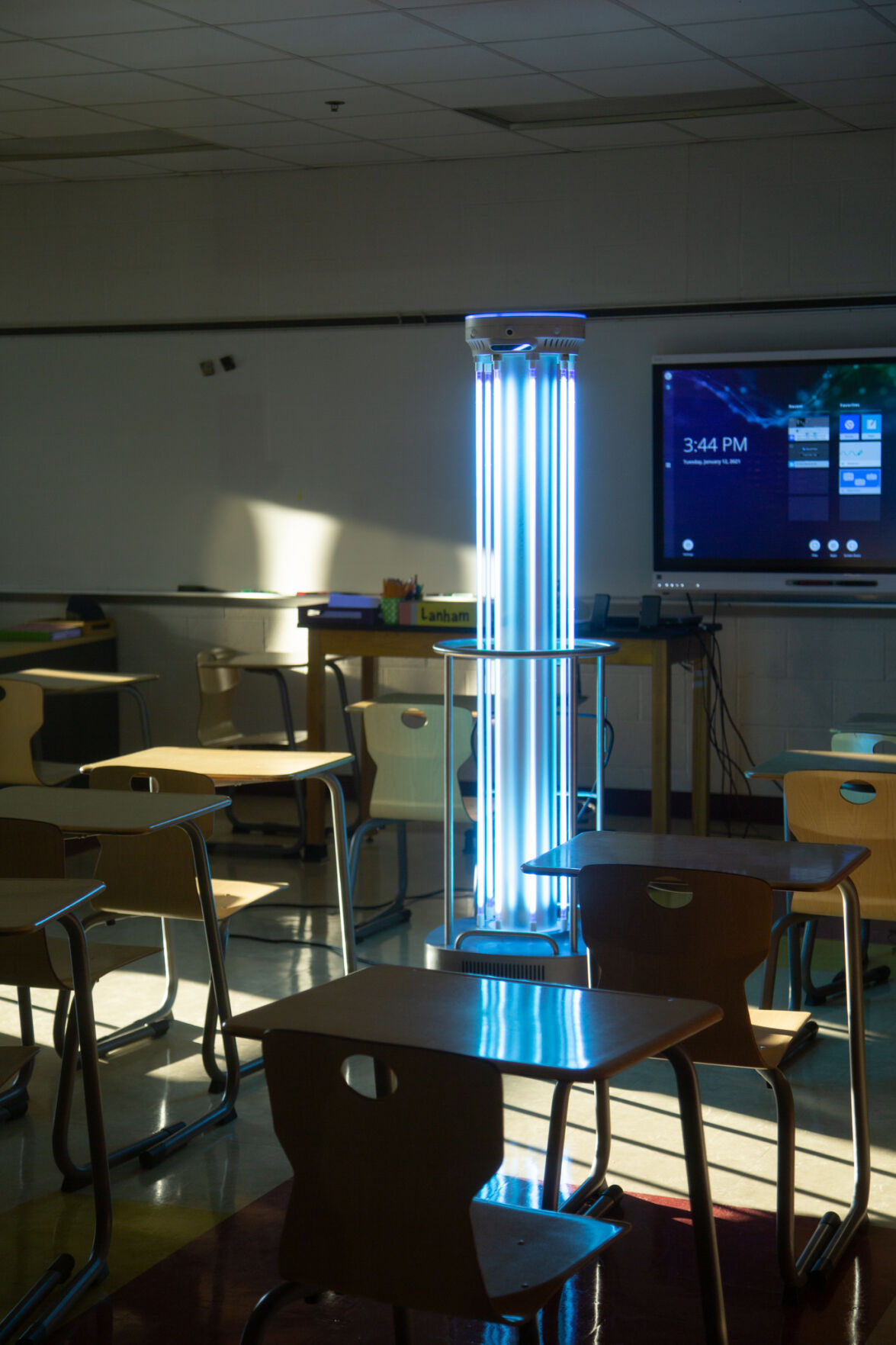 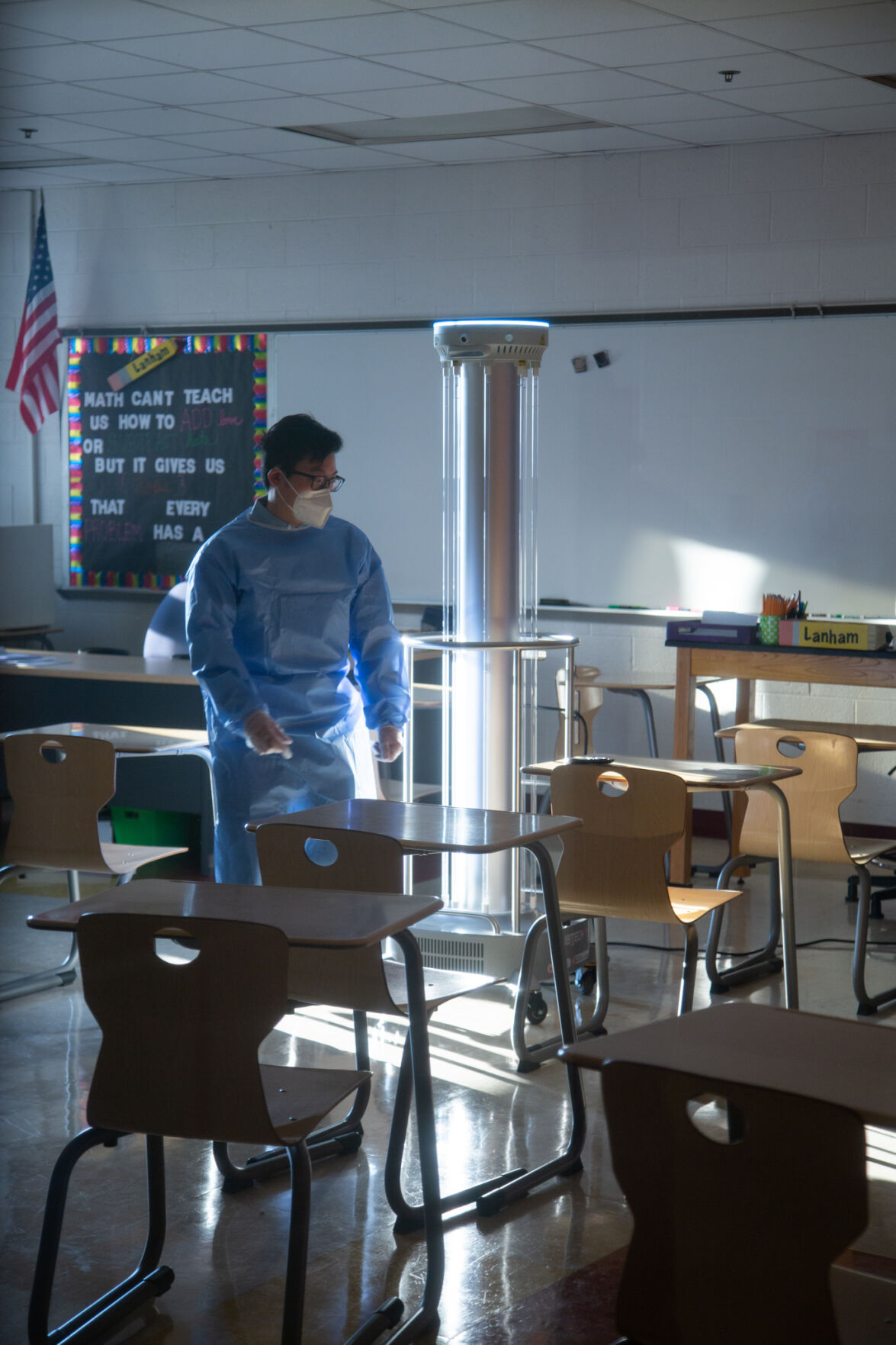 The Christina School District took part in a pilot program that utilized a cutting edge, automated, COVID-killing robot to cleanse its classrooms with blasts of light.

Appearing at the Bancroft and Bayard schools, UBTech's ADIBOT can roll into a school setting and, using UV-C light, destroy germs on every surface. The tools have been used in healthcare environments for almost a century, said Senior VP John Rhee, but this automated bot brings that technology to the classroom, looking to help get more kids back at their desks.

"Christina School District is the first organization, globally, that we're able to test these robots and pilot them," Rhee said. "We had been in communication with James Simmons, who's the Chief Equity Officer of the Department of Education. We touched bases with them throughout the pandemic; we have a separate education division, and so we're constantly talking to educators...and we understand some of their pain points."

One of those pain points is financial investment. One of these devices--a good one that gets the job done--typically runs around $125,000. But factoring in the advancements that UBTech has added, to make it an automated, moving robot which can detect its surroundings and determine if a human is present to delay the process of bathing everything in UV-C light, meant the price was only going to go up, keeping the technology out of reach of most school systems...or does it?

Rhee said their math works out to about $35 to $45 a day for the next most popular method of disinfecting via a gallon of germicide. He said they achieved an attractive price-point.

"We've also done a pretty good job in developing our supply chain," he said. "We are as close to vertically integrated as possible as a robotics company. And we have robots making robots, and I know that sounds a little futuristic...but we have a highly automated manufacturing process."

In the CSD, Rhee said the entire point of their endeavors is to do good, and do it well. He wants UBTech to have a positive impact on the global community, and so finding and outfitting schools which might not otherwise have an opportunity to put their tools to work was an important piece to moving the project forward. 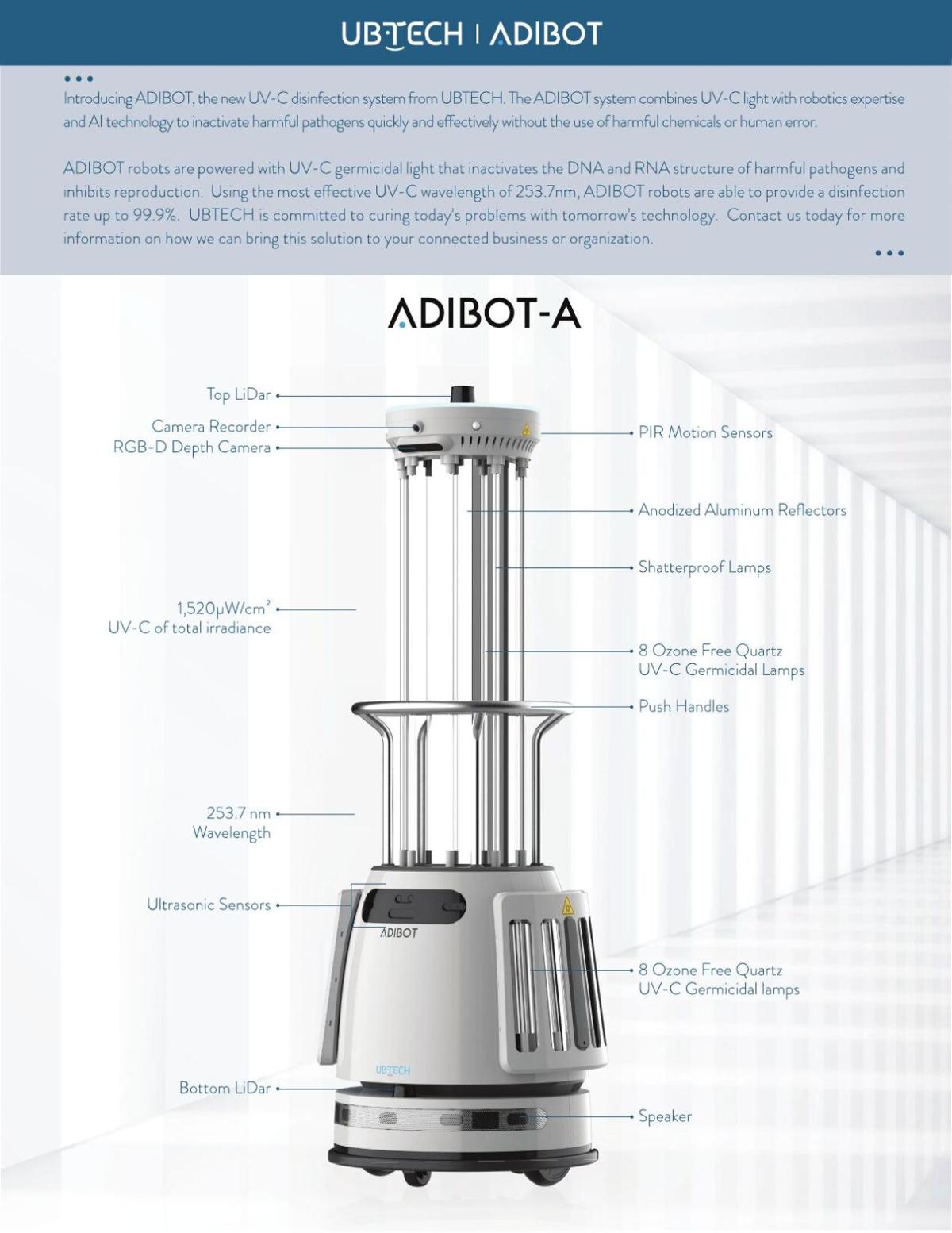 "And Mr. Simmons said, 'Hey, you know, if you guys are up for it, you know, schools are in need of adding additional layers of protection, and not only from a cost-of-activity perspective, but also true safety and making our faculty members, our custodial staff, and parents feel safe about sending their kids to school. What are your thoughts on piloting with us, and piloting in an area where COVID has had a large impact," Rhee said. "COVID has aligned with...neighborhoods with lower incomes. And so that's kind of why we developed these products: to try to be as impactful as possible, and it aligned with two schools in the Christina School District...that was representative of, across the country, the types of areas and types of schools where neighborhoods have been adversely affected by COVID, but also didn't have as many tools as perhaps more well-funded organizations to keep those environments safer."

Staff responded positively to the implementation of this technology, finding their levels of comfort both in using the technology, but also in its presence. Simons said in a provided on-camera interview that ADIBOT also provided a faster turnaround on environments exposed to a positive case, in particular  large facilities like gyms or cafeterias, or high-traffic areas like the nurse's office.

"We did find that the custodians who would then have to go into the room directly after the clean, had a much higher comfort level of going into those rooms," he said. "The CDC recommends recommends 24 to 48 hours before a room where there was a positive case can be used again; this technology allows that that room to be safe almost immediately after it's been cleaned...Without the nurse's office, the cafeteria, the gym, those become problematic for buildings to manage. So this technology, and that shrinking of that timeline, was vital."

The two-week pilot program has since wrapped, and the results are currently undergoing analysis as Rhee said UBTech's teams work through all the feedback they've received, pros and cons about the technology, and how people felt about using it in their given environments. 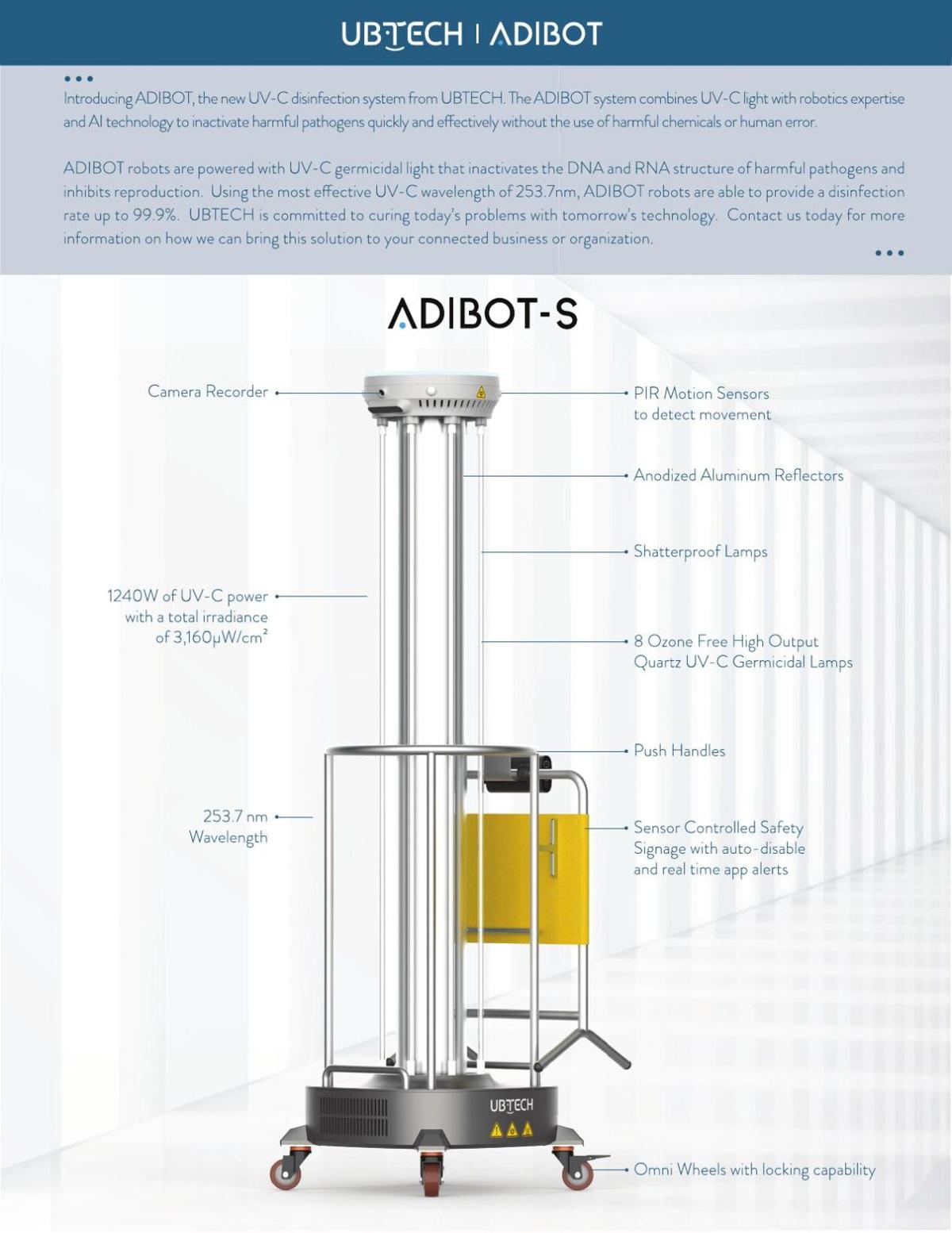 "The feedback has been positive. Custodial staff, they feel safer in those environments; teachers and students and parents feel safer coming into those environments," he said. "I think what's important is--from a scientific perspective, machines like ours do decrease the amount of pathogens in a classroom for example--but one thing that is also very important is making sure that people feel safe in those environments. Something that was impactful to me was [Christina School District Superintendent Dr. Dan] Shelton said, even pre-pandemic, it was important for schools to make people feel safe, so that they can achieve their objectives of learning and teaching."

Shelton said perception of an environment can dictate how successful an educator is--if anyone is anxious about the safety of their environment, especially students, they aren't as apt to fully engage in their studies.

"We may never get to back to normal. But we need to come up with some sort of a new normal, where our students are going to have what they need, so that they can be successful," he said in a provided on-camera interview. "And we need to make sure that our teachers and our staff feel comfortable in the buildings if we're going to bring students back. So this was one of many strategies that we've investigated, and some that we've invested in, to try to make sure that we're giving that extra layer of protection."

With the vaccine here, but supply lines struggling to keep up, Rhee said these devices are something that will continue to get use in the immediate future, and well down the road, to combat any distant curveballs nature might throw our way.

"We see the light at the tunnel, but now we are able to measure the tunnel," Rhee said. "The tunnel is pretty long. And so, we are working with those organizations to make sure they have a strong tool in the toolshed that they can use to keep their environment safer."