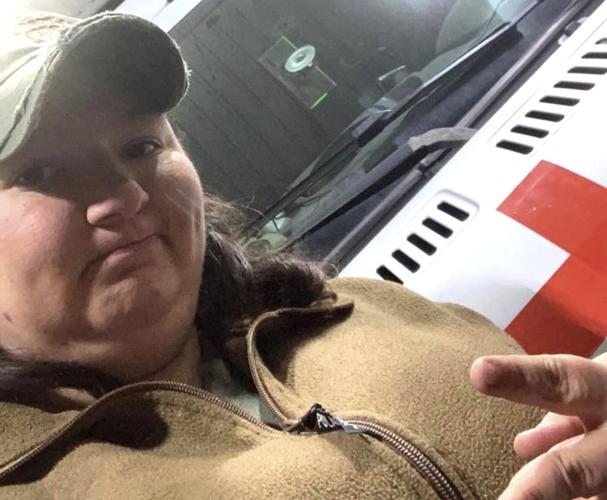 Anja Osmon, an American who left home for Ukraine to help in the fight against Russia, is shown in an undated self portrait provided in May 2022. Osmon, who did tours in Iraq and Afghanistan while serving in the U.S. Army from 2009 through 2015, said she went to Ukraine on her own. A medic, she said she arrived in Ukraine on March 20 and lived in the woods with other members of the International Legion before a new commander sent her away because he didn’t want female fighters. 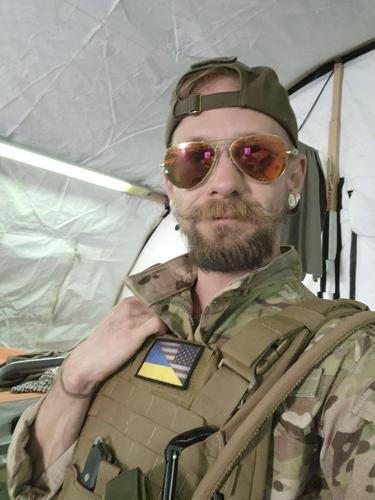 Eddy Etue, an American who left home for Ukraine to help in the fight against Russia, is shown in a self portrait taken on Sunday, May 1, 2022. The U.S. Marine veteran said he quit his job in the gig economy, found a friend in Colorado to watch his cat and gave up his home four blocks from the beach in San Diego, Calif., to help out in Ukraine, where he's been about two weeks. He first worked with an aid organization but now is training with the International Legion.

Harrison Jozefowicz quit his job as a Chicago police officer and headed overseas soon after Russia invaded Ukraine. An Army veteran, he said he couldn’t help but join American volunteers seeking to help Ukrainians in their fight.

Jozefowicz now heads a group called Task Force Yankee, which he said has placed more than 190 volunteers in combat slots and other roles while delivering nearly 15,000 first aid kits, helping relocate more than 80 families and helping deliver dozens of pallets of food and medical supplies to the southern and eastern fronts of the war.

It’s difficult, dangerous work. But Jozefowicz said he felt helpless watching from the United States last year during the U.S. pullout from Afghanistan, particularly after a close friend, Staff Sgt. Ryan Knauss, died in a suicide bombing at Kabul.

“So, I’m just trying to do everything I can to make sure I can help others not go through what I went through,” he said Saturday during an interview conducted through a messaging platform.

A former U.S. Marine who died last week was believed to be the first American citizen killed while fighting in Ukraine. Willy Joseph Cancel, 22, died Monday while working for a military contracting company that sent him to Ukraine, his mother, Rebecca Cabrera, told CNN.

An undetermined number of other Americans — many with military backgrounds — are thought to be in the country battling Russian forces beside both Ukrainians and volunteers from other countries even though U.S. forces aren’t directly involved in fighting aside from sending military materiel, humanitarian aid and money. The U.S. government discourages Americans from fighting in Ukraine, which raises legal and national security issues.

Russia’s invasion has given Ukraine’s embassy in Washington the task of fielding inquiries from thousands of Americans who want to help in the fight, and Ukraine is using the internet to recruit volunteers for a foreign force, the International Legion of Defense of Ukraine.

“Anyone who wants to join the defense of security in Europe and the world can come and stand side by side with the Ukrainians against the invaders of the 21st century,” President President Volodymyr Zelenskyy said in a recruitment pitch.

Texan Anja Osmon, who did tours in Iraq and Afghanistan while serving in the U.S. Army from 2009 through 2015, said she went to Ukraine on her own. A medic, she said she arrived in Ukraine on March 20 and lived in the woods with other members of the International Legion before a new commander sent her away because he didn’t want female fighters.

Osmon, 30, said her mother wants her home before September. But for now she’s anxious to get out of the hotel where she is staying in Lviv and catch on with another fighting force nearer the action.

“I can’t turn away from injustice,” she said. “No one should be scared.”

U.S. Marine veteran Eddy Etue said he quit his job in the gig economy, found a friend in Colorado to watch his cat and gave up his home four blocks from the beach in San Diego, California, to help out in Ukraine, where he’s been about two weeks. He first worked with an aid organization but now is training with the International Legion.

Etue, 36, said he simply couldn’t stay home. “It’s just the right thing to do,” said Etue, who financed the journey through an online fundraising campaign.

Etue’s family history pulled him toward Ukraine. He said his grandparents left Hungary with nothing but their four children and clothes after the 1956 revolution, which was put down by Soviet forces that killed or wounded thousands.

“What’s happening here will affect not only the people who are experiencing it but their children and grandchildren as well,” he said. “I know that from personal experience.”

Jozefowicz, the former Chicago cop, says there are thousands of American and other volunteers in Ukraine. Multiple organizations are operating in the country, and Jozefowicz said his group alone has placed scores of volunteers in positions all over the country, with about 40 of those being combat jobs.

“We do not facilitate a civilian going into any direct-action role. We only guide and connect prior military volunteers,” he said.

But there’s plenty of other work to do. Groups of volunteers are getting medical and food supplies to people in the nation of 44 million people, he said, and others are working with refugees and others who’ve had to flee their homes.

“The closer I got into Ukraine and the more time I spent in Ukraine, the more voids I found that needed to be filled to maximize my groups volunteer efforts,” he said.

Osmon, who said she’s been in contact with Jozefowicz’s group, said she supplied troops with antibiotics and anti-inflammatory medications after days in the woods.

“Most everyone had air raid fever from hiding in the trenches in the snow and cold air,” she said. “Bronchitis was ravaging us.”

Etue said he got a feel for the country after making a 24-hour round trip with another volunteer to pick up a vehicle in Odessa. He said he’s been impressed with the quality of people serving in the International Legion since Ukrainians have done a good job of weeding out the inexperienced and “war tourists” who don’t have much to offer a military unit.

“I think they’re doing amazingly well given that they’re at war with one of the largest standing armies in the world,” he said.