After three-and-a-half hours of debate and public comment and a failed attempt to table, a bill banning high-capacity firearm magazines in Delaware was released from the Judiciary Committee on a 6-3 vote and will now head to the floor of the state House.

Primary House sponsor Rep. Nnamdi Chukwuocha (D-Dist. 1), said he knows Senate Bill 6 isn't a catch-all solution to ending gun violence, but what he hopes is legislation like it plays a role in a greater picture in which pieces of legislation work together to make Delaware safer.

While the bill provides an allocation of funds to create a buyback program, it's one of the many grounds on which critics of the bill challenge it. Rep. Jeff Spiegelman (R-Dist. 11) said in even that regard alone the bill fails the test of constitutionality, not providing nearly enough of a resource or close to a fair amount for property being turned in by citizens.

"We're on rather shaky legal grounds here, that we're essentially potentially passing a thing and then just kind of shrugging our shoulders and hoping that the Supreme Court decides in the bill's favor," he said.

Spiegelman also presented during the committee hearing a large-capacity magazine he'd had made using a 3D printer to showcase how easy criminals who have a desire to acquire such a magazine could do so, and therefore, the law as written would only stop law-abiding citizens from acquiring one in the state.

The point was one made frequently by public commenters--that legislators, while perhaps well-intentioned, were making criminals out of current law-abiding citizens and sportsmen while criminals wouldn't be stopped from acquiring the tools of destruction they sought. However, supporters of the bill, like Karen Riordan of Moms Demand Action, said that kind of thinking--that change won't stop everyone, so therefore nothing should be done at all--didn't hold water.

"I'm tired of hearing that the criminals will find a workaround from the law. That hasn't stopped us from having other laws. We aren't a lawless society. Just because people run red lights doesn't mean we should get rid of all traffic lights," Riordan said. "Large capacity magazines have little use in hunting or law enforcement, but they are a very common utility in mass shootings. Gun violence is getting worse, and you, as our elected officials, have the responsibility and the privilege to do something about it."

Some commenters presented less articulate arguments, instead leaning on name-calling to attempt a point. Tim Collins, who ran against and lost to Rep. Melissa Minor Brown in the 17th District, unleashed on the lawmakers over the possibility of not having more than 17 rounds in a magazine.

"I want every legislator here to do me a favor. I want you to look in your camera right now, because the Second Amendment was made for people like you--the most uneducated, stupid people that don't know a damn thing about the United States Constitution," he said. "Our founding fathers knew this was coming. And it's here. You. The most stupid people I've ever seen in my life.

The bill creates a misdemeanor for possession of a large-capacity magazine on the first offense, and a felony charge for subsequent offenses. It heads next to the House floor for discussion and vote, the final step the bill faces before potentially heading to the governor.

Read the entirety of the bill here: 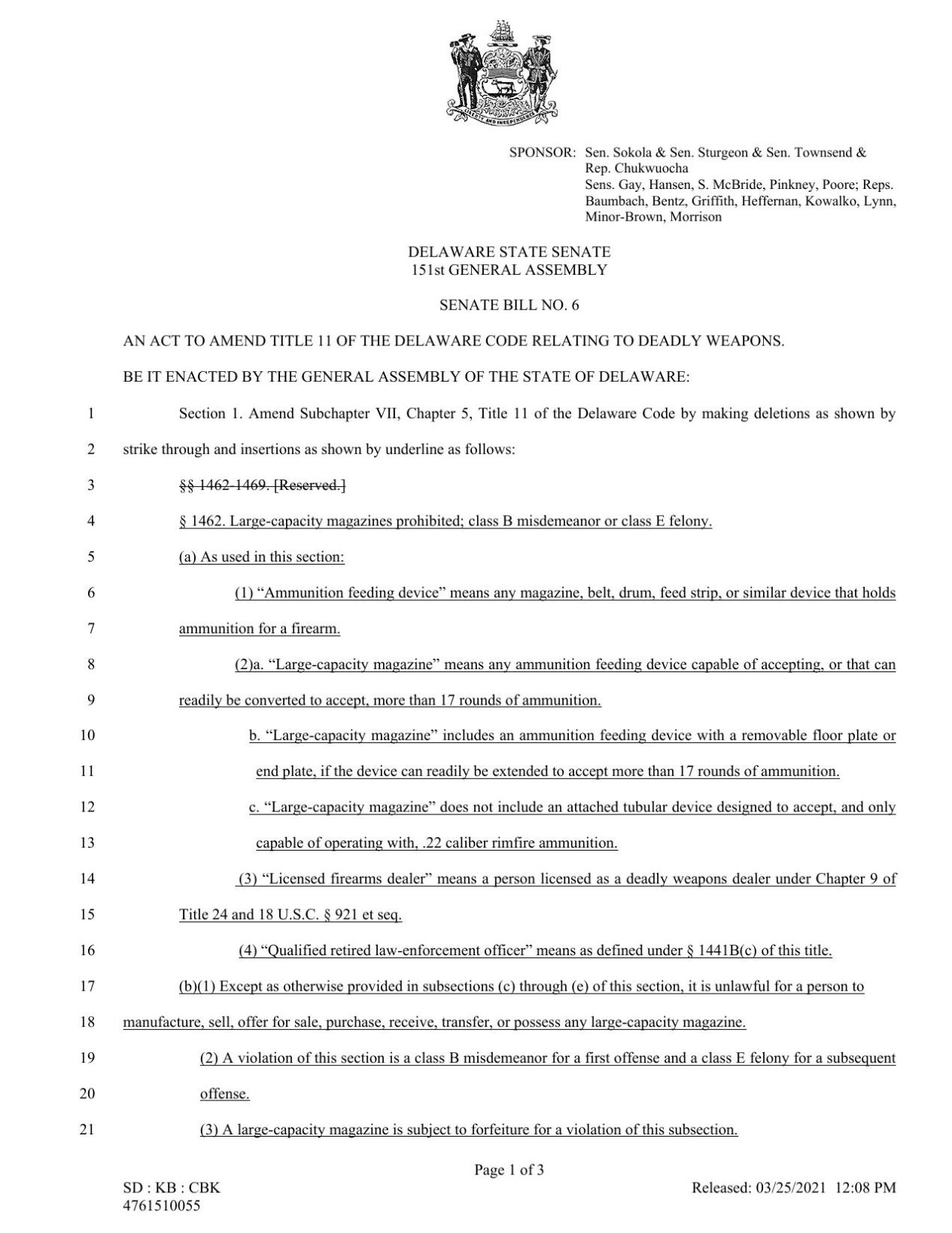 A bill which would create a requirement to obtain a permit before purchasing a handgun passed in the Delaware House Judiciary Committee Tuesday.