State departments continue to plead their cases for budget increases before Delaware's Joint Finance Committee, and on Tuesday, the overarching state agency tasked with responding to a global pandemic laid out what's happened in the last year and where their efforts are currently focused.

"I want to briefly just touch on the COVID response, which we continue to live through," said Department of Health and Social Service (DHSS) Secretary Molly Magarik. "As we recall those days in late February 2020, I don't think any of us could have imagined what was about to unfold, and the dramatic and far-reaching changes that would come to our state. Almost one year later, DHSS, our sister agencies, our healthcare community, and nonprofit partners continue to respond to COVID-19."

Magarik said Delaware's health care workers and social partners have advanced an admirable agenda of protection and care for all the First State's citizens so far, but the fight isn't over yet.

"Together we have built a robust testing system, which is ranked in the Top 10 of states in the country, on a per-capita basis," she said. "And we have a robust contact tracing system that employs over 400 people, to identify positive cases and alert their close contacts of exposure. We also have transparency and data through our My Healthy Community website. In December of last year, we began the largest public health response in our state's history when we entered [Phase 1A] and health care workers began receiving doses of the COVID-19 vaccine. Today, we are working to further reduce the number of positive cases while also distributing the vaccine as quickly, efficiently, and equitably as the supply from the federal government allows."

The department is seeking a 2.3% budget increase to bring their total funding to $1.27 billion. Improvements or additions covered would include one-time funding for updating the Delaware Medical Enterprise System and a variety of funding initiatives for housing, special schooling, Medicaid growth, Group Violence Intervention, and similar programs critical to Delawareans even during--maybe more so because of--a global pandemic. 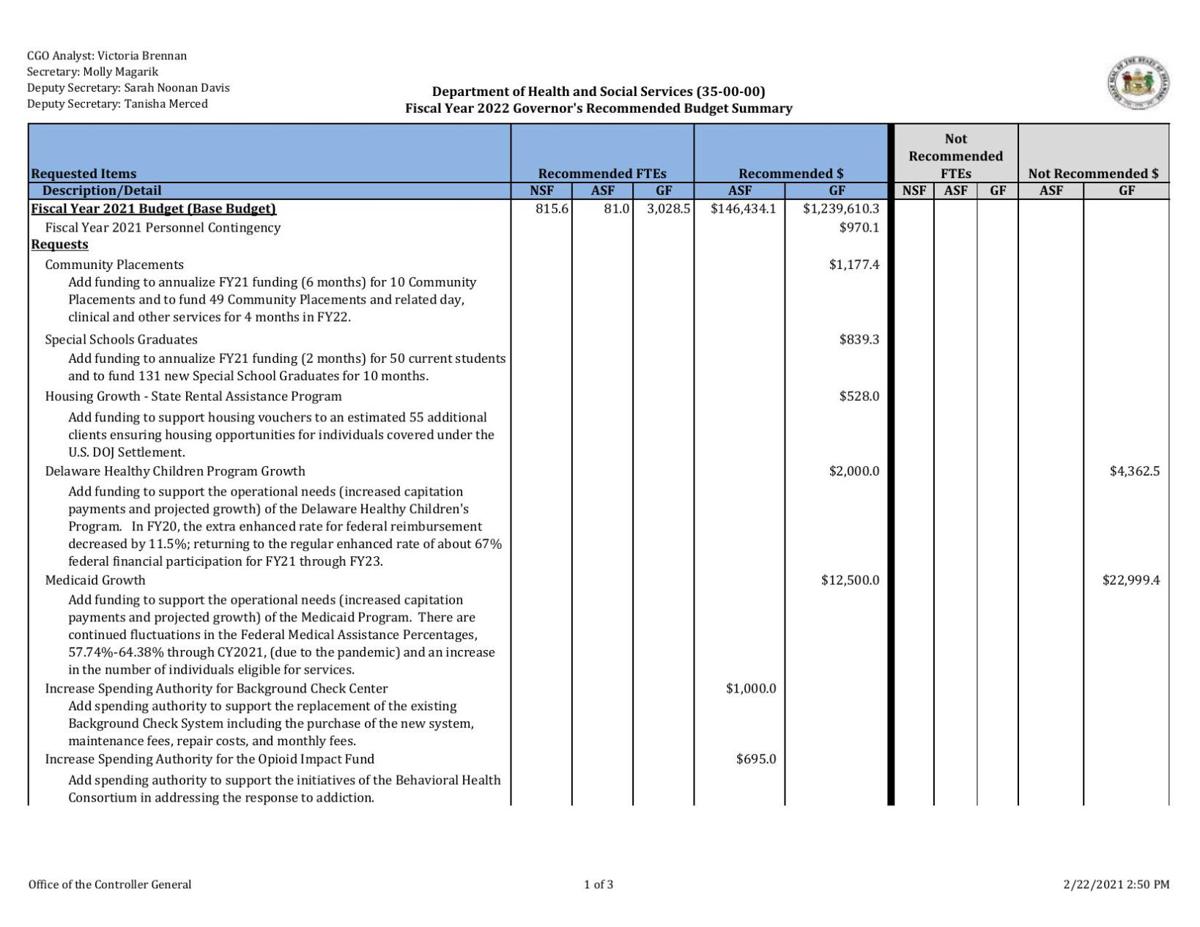 There was some concern about federal funding eventually drying up, putting some of these programs in danger of financial shortfall as the country moves beyond the pandemic, and Magarik said those sources would constantly be monitored, conversations with the Office of Management and Budget held, and programs readjusted as necessity dictated.

One of the other highlights Magarik pointed to was the way DHSS continued to prop up and support local initiatives, like the New Castle County government's purchase of a hotel to aid families and individuals who find themselves struggling and homeless because of the pandemic.

"There's a partnership with New Castle County. They purchased a hotel. We're happy to bring the services that DHSS already has to bear, to support individuals there and to stabilize them and then hopefully move to more permanent housing in the future."

She said the department is already embroiled in the efforts to provide aid in circumstances like that, and they continue to seek out ways to maximize their good work.

"Members of my team talk frequently with with people at the county...to understand what they're trying to do," Magarik said. "We have existing resources, which we think is very important from a sustainability perspective...How do we bring those services to bear? So just, really, a lot of conversations. People on my team talk to the people at the county--if not daily, at least every other day--about different potential opportunities, so it's a great model of collaboration." 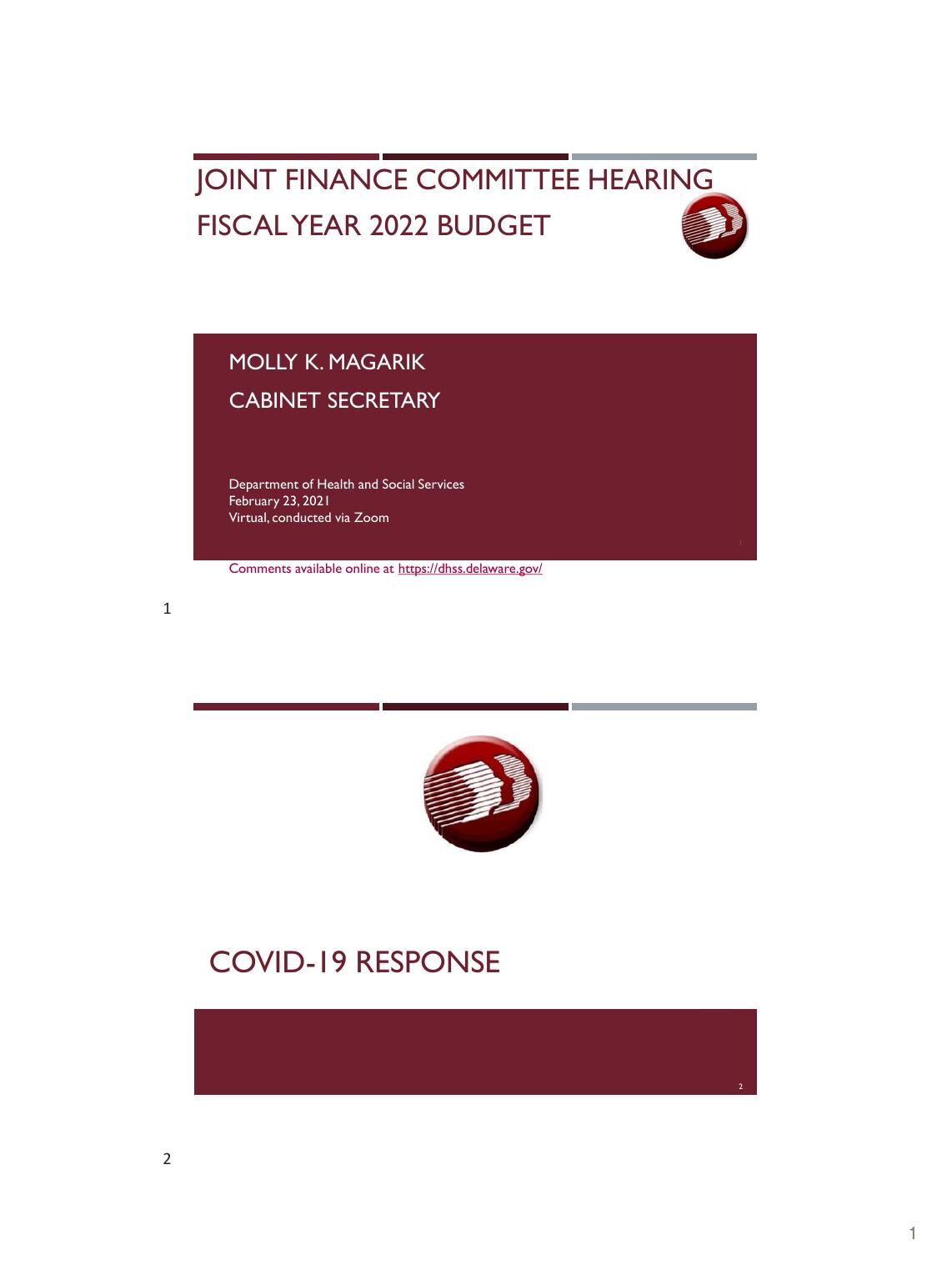