The Delaware General Assembly will reconvene the second half of the 150th legislative session virtually, beginning May 26.

"We had some legal issues we had to resolve about doing a virtual session. We had a fire about three or four years ago, and we changed our Constitution after the fire because we found out that we were limited as to where we could meet," said House Speaker Pete Schwartzkopf.

Until recently, Delaware law required the General Assembly to meet in person in Legislative Hall to conduct business. However, the Legislature amended the Delaware Constitution in 2018 to allow for session to take place in alternative locations during an emergency. Emergencies include public health threats, and Schwartzkopf said they obtained legal advice, paving the way to hold session virtually.

"Our goal has always been to [continue session] as correctly as we can, and be to to include not only legislators, of course, and staff, but the public," said Senate President Pro Tempore David McBride.

Session will be conducted via Zoom with proceedings being broadcast on YouTube and shared on caucus Facebook pages, meaning public participation is not possible, and no witnesses will be called.

"We're talking about a virtual session; we're not changing what we do; they don't write-in comment, for our general session. If it's a committee meeting it's a different ball game. We usually don't have public testimony that much in general session," said Schwartzkopf. "The public can always call or text or email any of their representatives anytime they want, and they will do what they always do, the representatives will be the voice of the public on the floor of the House or the Senate."

"We're the only state in the United States of America that allows citizens to get on the floor and testify on bills, it's a big deal...unfortunately, in this trying situation we're not able to do that. It's just not possible. We like to do that. We're very proud that you and citizens can sit on the floor when we're in session--we're not going to be able to do that. COVID's not allowing us to do it," said McBride.

Schwartzkopf said the mid-March shutdown of Legislative Hall was necessary to protect the public from the coronavirus pandemic since hundreds of people are in and out of the capitol building daily. On June 30, the day the budget is passed, 1,700 persons pass through Legislative Hall.

"We have rules we have to play by...we have to do things in the proper way so to withstand any kind of constitutional challenge afterwards so we feel confident that we're at that place now," said Schwartzkopf.

From there, Scwhartzkopf said the priority will be tackling the $680 million deficit.

"We're going to concentrate on the money bills," said Schwartzkopf. "The budget is our number one concern, it's a constitutional concern, and we're definitely going to make sure we get that done. So anything past that...most of the bills that are out there right now, will have to be refiled in January."

"We need to fix the 2020 [budget]...as you well know, we moved the income tax date filing from April to July which means all the revenue we were counting on for the 2020 budget coming from our state income tax will now be in the next fiscal year it will not be in this year...so that's what we have to fix first."

The Joint Finance Committee will meet in-person in the House Chamber, beginning in the first week of June; they'll all come in through the front door and will be subject to temperature checks to enter the building, and must wear face masks. Anyone with a temperature above 99 degrees will be sent home. The JFC's sessions will be audio-streamed.

"We will be taking every safety precaution we can for them to maintain their safety," he said. "Any member that doesn't feel comfortable sitting in there, we'll put them in their office and Zoom them into the meeting," said Schwartzkopf.

McBride said he's not worried about outsiders infiltrating legislative Zoom sessions, despite what's happened during a Christina School Board meeting and a Legislative Black Caucus meeting.

"We're being told by our IT people that there are definitely ways to avoid [Zoombombing] with security, so we're confident that we're able to do a Zoom meeting, where we won't have an issue like that, based on the information we're getting from our computer people," said McBride.

Despite not being in session, Schwartzkopf noted lawmakers haven't been sitting around during the stay-at home orders.

"While we may not be in Dover, we're still doing our jobs; we're still doing things in our districts. I think it's more important for us to be in our districts now than ever before because we have so many people that need assistance, whether it's helping them navigate the Small business Administration and trying to get loans, or going through the federal government, or unemployment...we still have a lot of calls that come on. I live on the telephone," said Schwartzkopf. "We still have a say on what's going on in the state, we're working very closely with the governor." 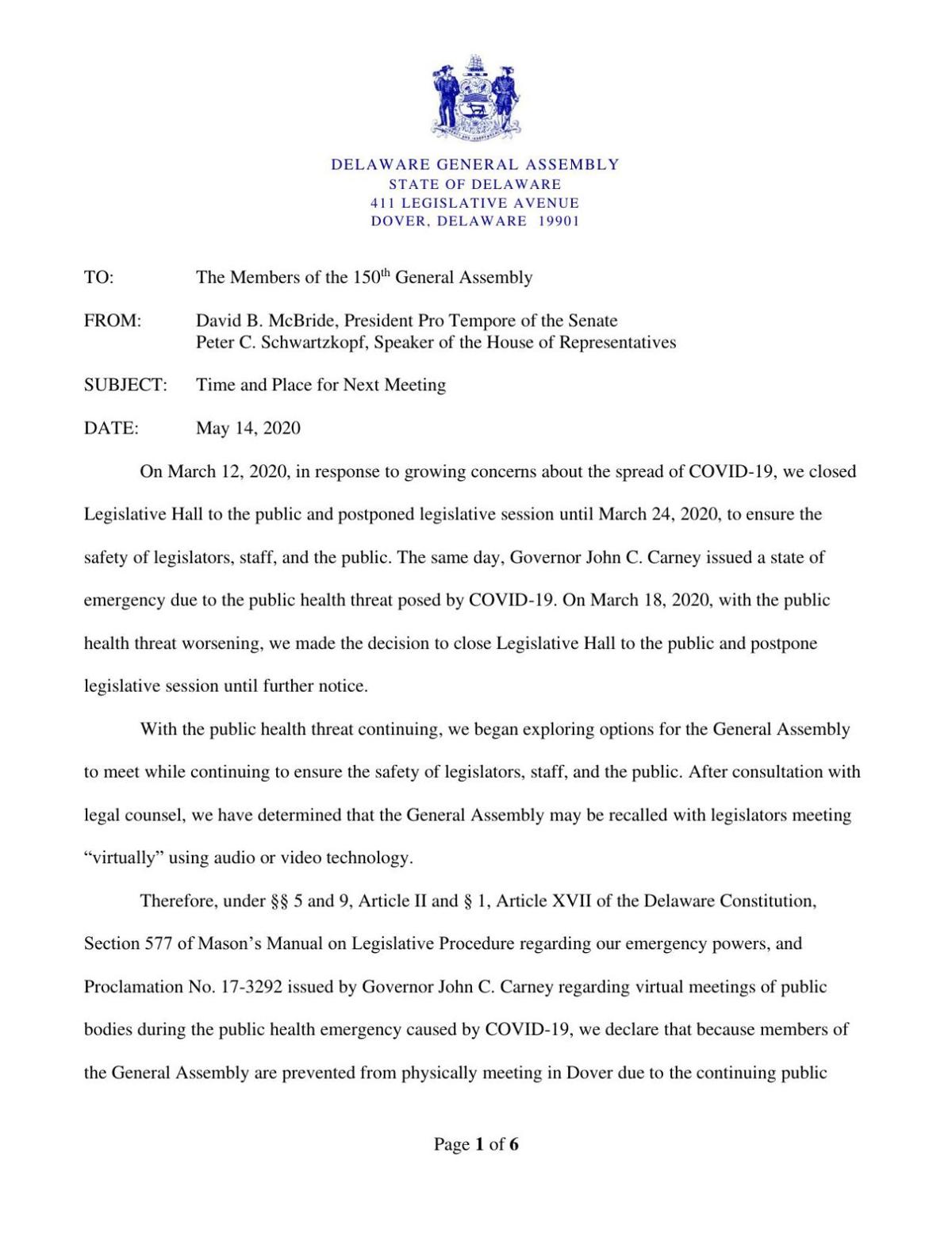 General Assembly session is now postponed indefinitely - what does this mean for the FY '21 budget?

Delaware lawmakers will not be resuming the General Assembly session anytime soon.

The Delaware legislative session has been postponed for one week amid the coronavirus pandemic.

As Delaware faces a $450 million dollar budget deficit, lawmakers on the Joint Finance Committee were presented with a new budget proposal tha…