A $15 hourly minimum wage is one step closer to heading to Governor John Carney's desk after being released from committee Wednesday.

Senate Bill 15 with Senate Amendment 1, colloquially SB15, passed in the Delaware state Senate committees and a full vote on the floor in mid-March, and now it's making its way through the House. Primary sponsor Representative Gerald Brady (D-Dist. 4) brought it before the House Economic Development/Banking/Insurance & Commerce committee during a meeting Wednesday, April 21, 2021. 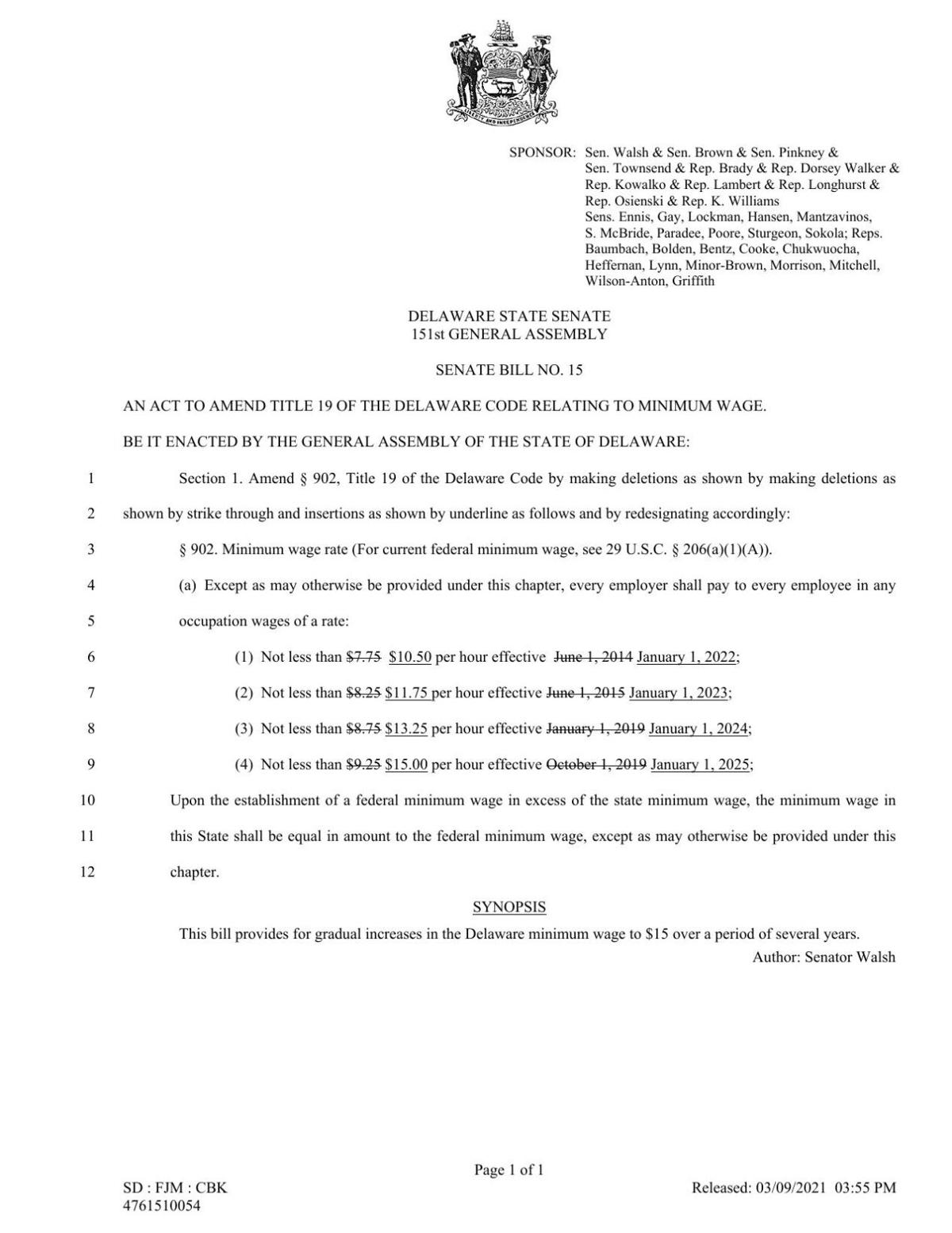 It ultimately was released from committee, passing 8 to 5, but not before some vigorous debate during a meeting that ran just shy of three hours.

"According to The Delaware Department of Labor, close to 150,000 Delawareans would be impacted by Senate Bill 15, including 35,000 workers currently earning the state's minimum wage of $9.25," Brady said. "In May the first of this year, Delaware's current minimum wage will be lower than the base that's required in four out of five surrounding Mid-Atlantic states, including New York, New Jersey, Maryland, and Virginia. I also point out that in other surrounding states, such as Pennsylvania, Governor [Tom] Wolf has proposed raising that minimum wage to $15 an hour in 2027."

Much of the conversation against the bill suggested Delaware's small businesses, the kinds like restaurants already working on "razor-thin margins,"--already struggling to have survived this long during the COVID-19 pandemic--are going to increase the costs of their offered products and ultimately lead to inflation to keep up with increased labor costs.

Rep. Jeff Speigelman (R-Dist. 11) was concerned robotics were going to take over those minimum wage jobs when companies were no longer interested in paying their workers high wages, instead choosing to make an investment in a robot which could do the job at a one-time cost. He pointed to the archnemesis of the minimum wage worker: Mr. Flippy.

"The price point is very interesting on this silly little robot here: it's $20,000," Spiegelman said. "It doesn't get sick. It installs overnight. So if you're starting a restaurant, and you're a 24-hour operation like White Castle, which is on the website right now, are you going to hire three people at $20,000 apiece, in perpetuity, or you're going to buy one Mr. Flippy, not hire the other two people, and pocket the $40,000 the first year, and the $60,000 every year after that?..In fact, if you order Mr. Flippy, you get four free tickets to a regular season LA Dodgers game."

Spiegelman didn't say whether the current minimum wage price point was keeping Mr. Flippy out of those same jobs right now since the robot already exists and companies could make that investment now, but he did state he believes the move is going to become an inevitability at some point. Mr. Flippy will eventually become Mr. Lawn Cutter, Mr. Electrician, and Mr. Plumber, he said.

His comments drew ire from some waiting in the public comment section, like Andrea Brown-Clarke, who was waiting to provide for the record her support of the bill, which she called "long overdue."

"I was truly appalled by a statement that was made by one of the representatives today. I thought it was very flippant and an entitled perspective, and that was to use Mr. Flippy," she said. "I'm also a black woman, I don't typically share that because as a diversity consultant for corporate America, I look at equality for all. Your constituents have voted you so that you can ensure their equality and equity at the same time. I, by no means, am compared to Mr. Flippy...Mr. Flippy doesn't have to worry about paying for household expenses and his family. It's an insult to anyone else that has elected you in the position to fight for their rights."

The struggles of Delaware's small businesses should be put ahead of the issue at hand, according to the New Castle County Chamber of Commerce's Joseph Fitzgerald, who joined the meeting on behalf of the chamber against SB15.

"Many businesses, particularly in the hospitality and retail sectors, are still struggling to cope with the economic impact of the pandemic. January 2022 is little more than eight months from now, so it will significantly impact the still recovering retail and hospitality sectors," Fitzgerald said. "According to The Delaware Department of Labor's monthly employment review for March 2021, the leisure and hospitality sector is still down 7,400 jobs, compared to February 2020, while retail trade jobs remain down 2,000 over the same period."

The argument that the move to increase minimum wage so close to a pandemic was one Rep. Larry Lambert (D-Dist. 7) wasn't prepared to hear, as it never seems to be a "good time," he said.

"Now we're in a period of a pandemic. And the new excuse is that, because of the pandemic, it's not a good time to raise the minimum wage. The burden is too strong on some of our businesses," Lambert said. "Every legislator on this call supported that resolution celebrating our essential workers. We honored their bravery, their valor, their sacrifice. But do we honor their dignity; $9.25 is not enough money for anyone to live in economic dignity. If anyone gives any business 40 hours of their life per week, they should be able to grab a gallon of milk, grab a loaf of bread, without applying for government assistance."

The bill passed along strictly party lines and will soon head to the House floor for a full vote. If it passes there, it will head to the governor's desk.

Last month, I introduced a bill in the Delaware General Assembly to gradually raise our stat…