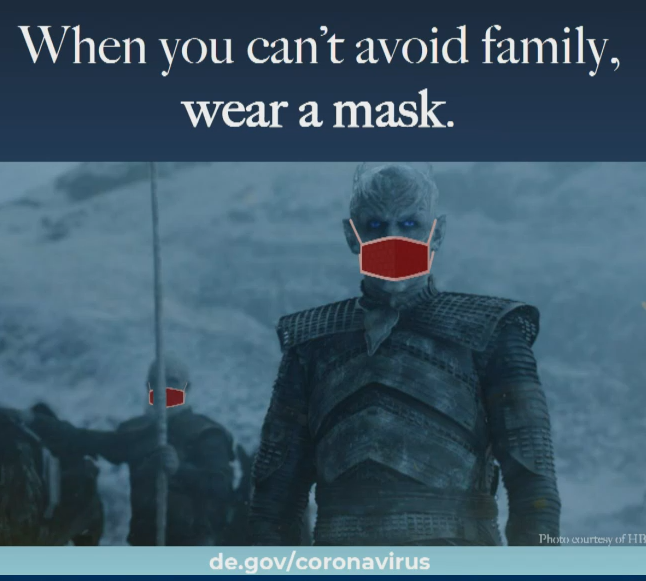 "We've got to get a hold on [COVID-19], we've got to do better than we're doing. We've got to tighten things up again," Governor John Carney said Tuesday. "We've been saying this for weeks about the informal social settings and gatherings, which is where the virus is most insidious and gets out and infects people and is transmitted one from the other. So we really need to to focus and lean in on those on restrictions"

During his weekly press conference on Delaware's handling of the novel coronavirus COVID-19 pandemic, Carney said there's some tracked data related to the virus trending in the wrong direction. The seven-day moving average number of new daily cases being identified stands at 241. It could lead to increased restrictions and provisions which could affect a number of life activities if Delawareans can't come together voluntarily to stop the spread of the virus, he said.

"That number is considerably higher than it used to be" Carney said. "Going back a month or two, during the summertime when we're thinking about whether we were on or off a quarantine list with New Jersey and New York, and our target then was just was under 100 new cases per day--you can see we're two-plus times that, but we're also doing more tests, and the tests, the percent positive gives us an idea of the comparison between two months ago and today."

"This, by far, is the largest number of zip codes in the state of Delaware that are meeting this criteria of areas of concern. We are seeing increases clearly in the data," said Delaware Division of Public Health Director Dr. Karyl Rattay. "We are seeing our biggest increases this past week in New Castle County, so while Sussex still has the highest case rates, the highest rise in cases and percent positive is in New Castle County."

The main concern for officials stemmed from Delaware's cases spiking just as the holiday season approaches and families prepare to gather together for large events. Rattay said gatherings are primarily the culprit when it comes to such wide, increasing spread of the virus.

"This is really tough," Rattay said, urging people to only dine at home or outdoors and distanced at restaurants with other individuals from the same household. "And don't plan on holding holiday dinners with people outside of your household, even with family members outside of your household. We've got to keep it small this year, and we really, truly hope that this is the last year that we need to say this, but it's important that we do everything we can to turn this around."

Now, officials said they're considering new restrictions to help limit the spread COVID-19 as the state moves backwards, from reducing the number of people permitted to gather, greater restrictions on sports and indoor activities, or even curfews on certain days.

"This virus doesn't care if you are tired of being cautious. This virus wants to spread," she said. "And any moment you are not cautious, is when it may get to you or your family or friends. So, all of us as Delawareans have a responsibility--and the ability--to help us turn this around and we are asking that you help us so we don't have to take additional actions."

Carney said they'll monitor what Delaware's neighbors are doing and go from there.

"I think a lot of things are on the table, mostly things that are being done in other states around us," he said. "We always have, through...going into nine months of this, tried to be consistent with what's happening in states around us so we don't create cross-border incentives as we did at one time with beaches and with liquor stores in the northern part of our state. So we'll continue to look at that and really try to make sure that the solution, or that the restriction, is geared and focused towards the problem. And it's a little bit hard to do that, given that the problem seems to be these informal social gatherings."

Delaware prisons to suspend visitation amid spike in COVID-19 cases

All in-person visitation will be suspended at Delaware's prisons amid a major spike in COVID-19 cases in Delaware.