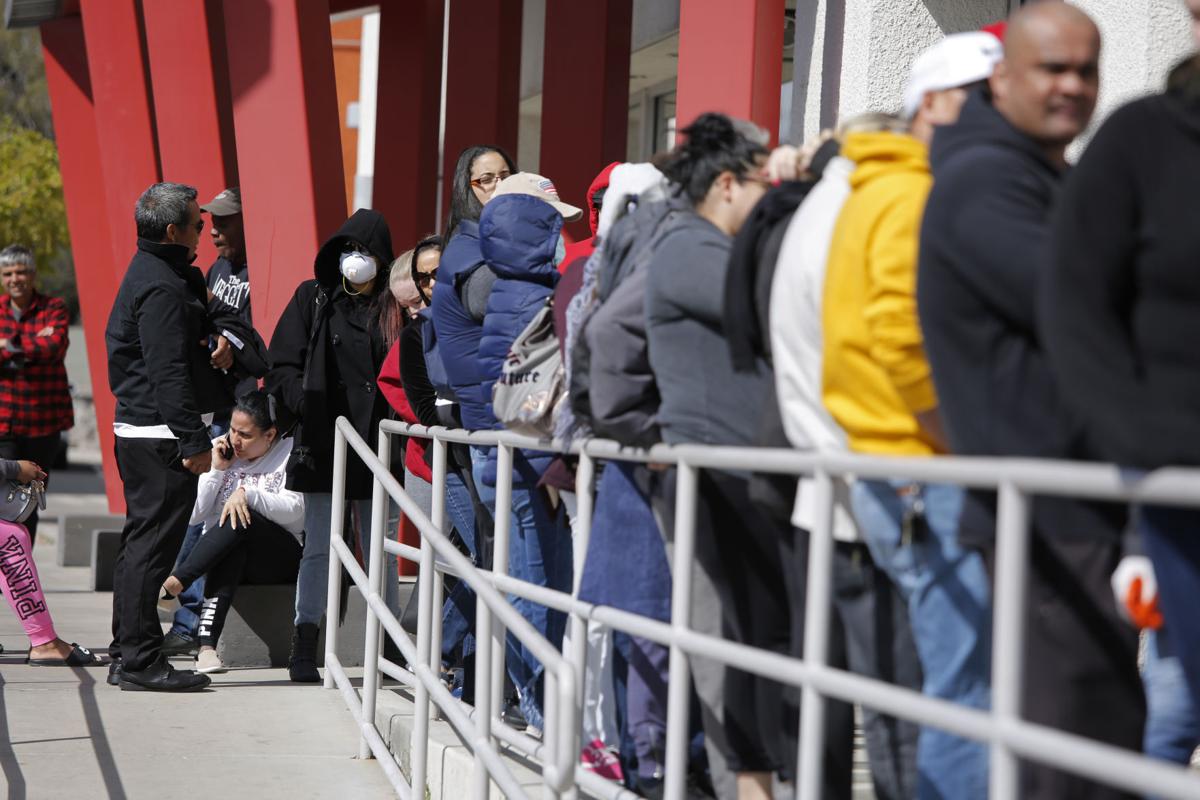 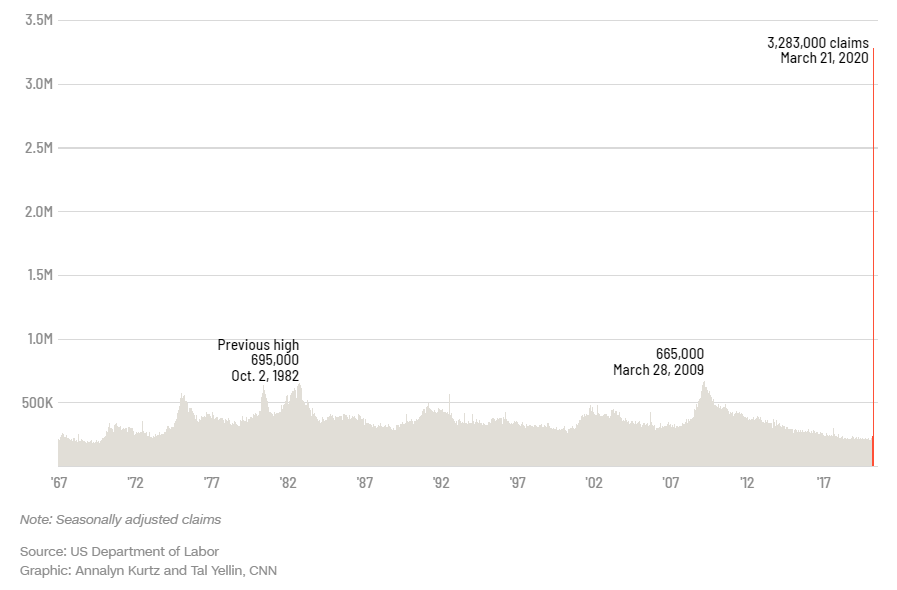 A record number of Americans filed for their first week of unemployment benefits last week, as businesses shut down to slow the spread of the coronavirus.

Initial jobless claims soared to a seasonally adjusted 3.28 million in the week ended March 21, according to the Department of Labor.

That is the highest number of initial jobless claims in history, since the Department of Labor started tracking the data in 1967. The previous high was 695,000 claims filed in the week ending October 2, 1982.

"The weekly claims for unemployment insurance benefits, for the week March 15-21, 2020 exceeded the number of claims received in any months over the past thirty years,” said Kenneth Briscoe, of the Delaware Department of Labor.

The previous record high was 9,632 claims filed in January 2002--for the entire month.

Initial jobless claims rose to their highest level on record in the week ending March 21, 2020.

"Most historical comparisons of this scale are inadequate.The closest would be natural disasters like major hurricanes. However, as today's report shows, the coronavirus outbreak is economically akin to a major hurricane occurring in every state around the country for weeks on end," Glassdoor senior economist Daniel Zhao wrote in emailed comments.

Last week's jump marked a massive increase from a revised 282,000 claims in the prior week. Prior to the pandemic, initial claims had been hovering in the low 200,000s each week, reflecting a strong job market.

But in the last couple weeks, the coronavirus outbreak has forced many businesses to suddenly shut down as the country tries to slow the spreading virus. For many businesses that also means laying off or furloughing workers, at least temporarily.

That is the key difference between the coronavirus shock compared with past periods of economic distress: it is sudden and impacts virtually every industry and business model around.

As a result, economists are expecting millions of job losses in the coming weeks.

Heidi Shierholz, a former chief economist for the US Department of Labor who is now with the Economic Policy Institute, called the surge in unemployment claims just the tip of the iceberg.

"We estimate that by summer, 14 million workers will lost their jobs due to the coronavirus shock," she said in a tweet.

Economists now expect the US economy to fall into a recession in the second quarter, before staging a comeback later in the year after the spread of the virus slows.

Meanwhile, state labor departments across the country are have struggled to deal with the sudden influx in claims for unemployment benefits. The New York Labor Department, for example, has added server capacity and hired more than 65 additional staff to handle all the claims that are suddenly pouring in. And last week, Florida's Department of Economic Opportunity said it planned to hire 100 extra staff to help answer calls and walk people through the application process.

Speaking later on Thursday morning, Treasury Secretary Steven Mnuchin downplayed last week's surge in unemployment claims in an interview with CNBC, calling the numbers "not relevant" because they pre-dated an economic relief bill passed by Congress on Wednesday. That bill includes support for workers, including checks from the government and expanded unemployment benefits.

He added businesses "hopefully will be able to hire back a lot of those people."

Delawareans who've lost their jobs or had their hours reduced due to the coronavirus shutdown, may be eligible for assistance from a program a…

Why this doctor and nurse are now TikTok famous

Health care workers show their glam side on TikTok