Delaware still has too few sober living and residential treatment facilities for those looking to overcome addiction--an ongoing problem leading to year-over-year increases in suspected drug overdose deaths, according to the Delaware Department of Justice.

Over the last four years, more than 1,000 Delawareans have died from drug overdoses.

"That is a number that I think about a lot; the majority of those overdose deaths are from opioids," said outgoing Attorney General Matt Denn. "Behind those numbers are 1,000 personal tragedies suffered by our friends and our neighbors; it is the public health crisis of our generation."

While statistics show the state lags behind national trends, in 2015-2016, Delaware had the sixth highest increase in overdose deaths in the country.

'This epidemic is devastating': August is deadliest month in Delaware for suspected drug overdoses

Expanded access to the overdose antidote Naloxone has saved lives and prescriptions for opioids have been reduced, but a report issued Wednesday, October 10, 2018, by the Delaware DOJ said Delaware continues to spend "few new dollars" on the expansion of long-term residential treatment or sober living facilities that are desperately needed.

A report commissioned by the Delaware Health and Human Services Department by Johns Hopkins highlighted those concerns and recommended "major action" to combat the "alarming" trend.

After 14 months of examination, Johns Hopkins Bloomberg School of Public Health and the Bloo…

"We hear over and over and over again: individuals who start down the path to recovery only to have their treatment interrupted, relapse, and end up back where they started. The state needs to provide long-term supervised treatment environments for those Delawareans who need them for their recovery," said Denn.

These concerns have been reiterated year-after-year in the DOJ's annual report. 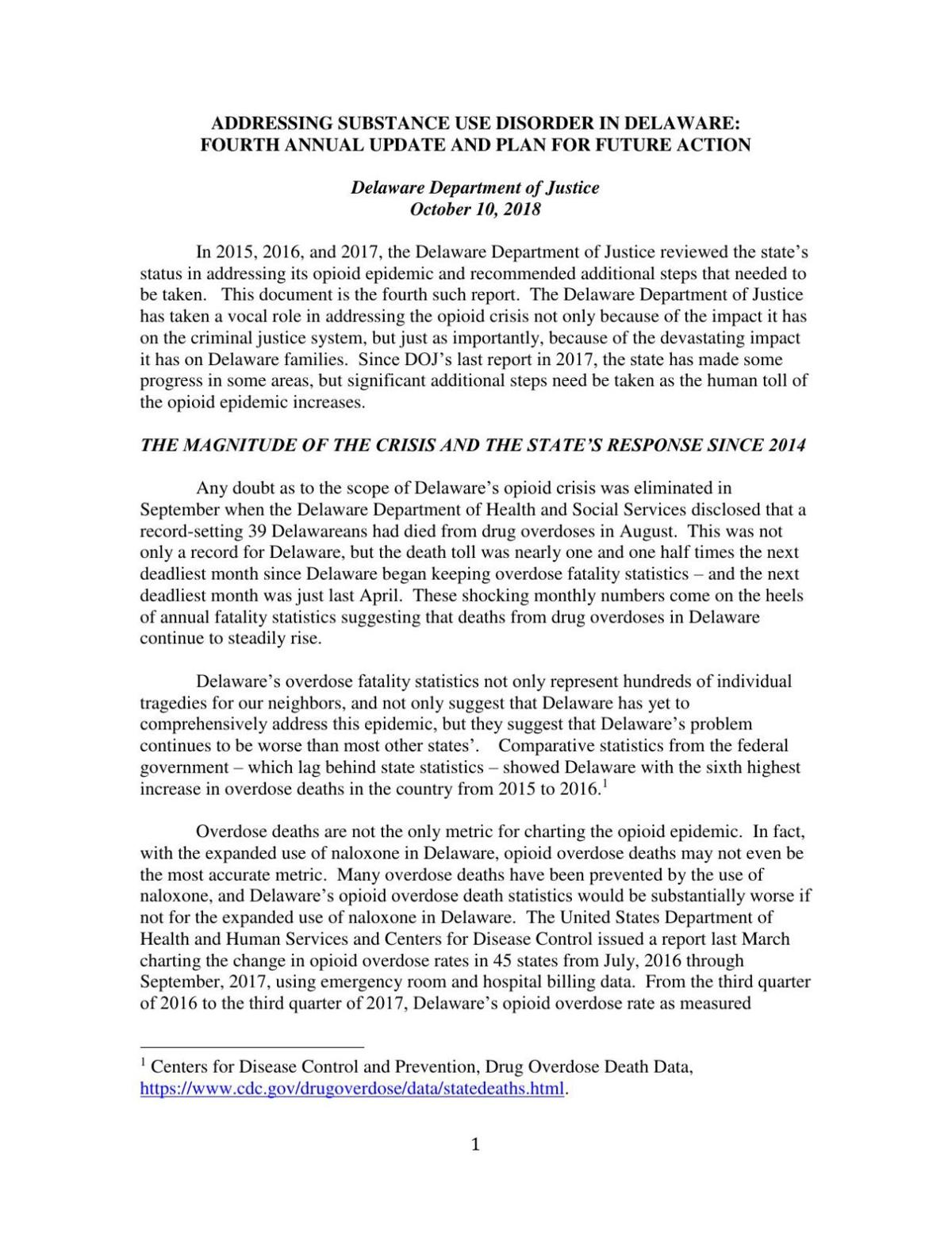 "We don't believe that current funding levels...from the state are adequate," said the attorney general.

In 2017, Denn suggested $4 million in one-time economic development funds would go a long way towards incentivizing the expansion of addiction treatment centers, but that proposal did not advance in the General Assembly.

"That would be a starting point," he said. "The numbers speak to the need."

VIDEO | Heroin's grip: 'It's time for Delaware to spend money on this problem,' Denn says

Efforts to create a recovery high school in Delaware, as profiled in-depth by WDEL, have also remain unfinished, largely due to funding--despite a willingness from Red Clay and Colonial school districts to partner on the initiative.

"If we are going to beat this thing, we've got to get the kids early; if we get people who are early in their addiction and try to get them squared away," Don Keister, founding member of aTtacK addiction who lost his son to a drug overdose, said the state will make a difference.

"We need to work to reduce the violence associated with drug trafficking and control the streets that, in some cases, are now controlled by the drug users. But we also want to help prevent, especially our children, from ever experimenting with drugs," said McLaughlin.

He demanded more for developing a statewide treatment program and touted this department's participation in the "Reality Tour" drug education and awareness program, being done in conjunction with aTtacK addiction and the Delaware State Police. The emotional program uses the life experiences of teens addicted to drugs and shows the lasting impact on attendees.

Col. Vaughn Bond, Chief of the New Castle County Police Department, touted the Hero Help program, which focuses less on arrests and more getting those with substance abuse disorders into treatment.

Since Hero Help was started in 2016, about 75 individuals have entered into treatment through the program.

"We have been focusing not only on the actual identifying and arresting the individuals responsible for bringing these drugs into our communities, but I think we put an equal amount of effort to reach out to those who are suffering," said Bond.

So far this year, Bond said New Castle County has seen 393 overdoses compared to 208 last year.  Among those, 58 have resulted in death this year compared to 50 last year.

"We are doing a great deal of work...but it's still very frustrating, but we can't give up, and we're going to stay focused," said Bond.

Hero Help has also expanded to include outreach and engagement. Now, the department is working to engage those who have suffered recent non-fatal overdoses, to garner real-time data on where repeat overdoses are happening.

The program has also been recognized as a community-based Naloxone program, so they can train individuals in the community in the use of Narcan.

Earlier this year, it was highlighted that Wilmington Police officers don't carry Naloxone, despite state-funded grants.

"We would like for every police department to be carrying Naloxone," said Denn.