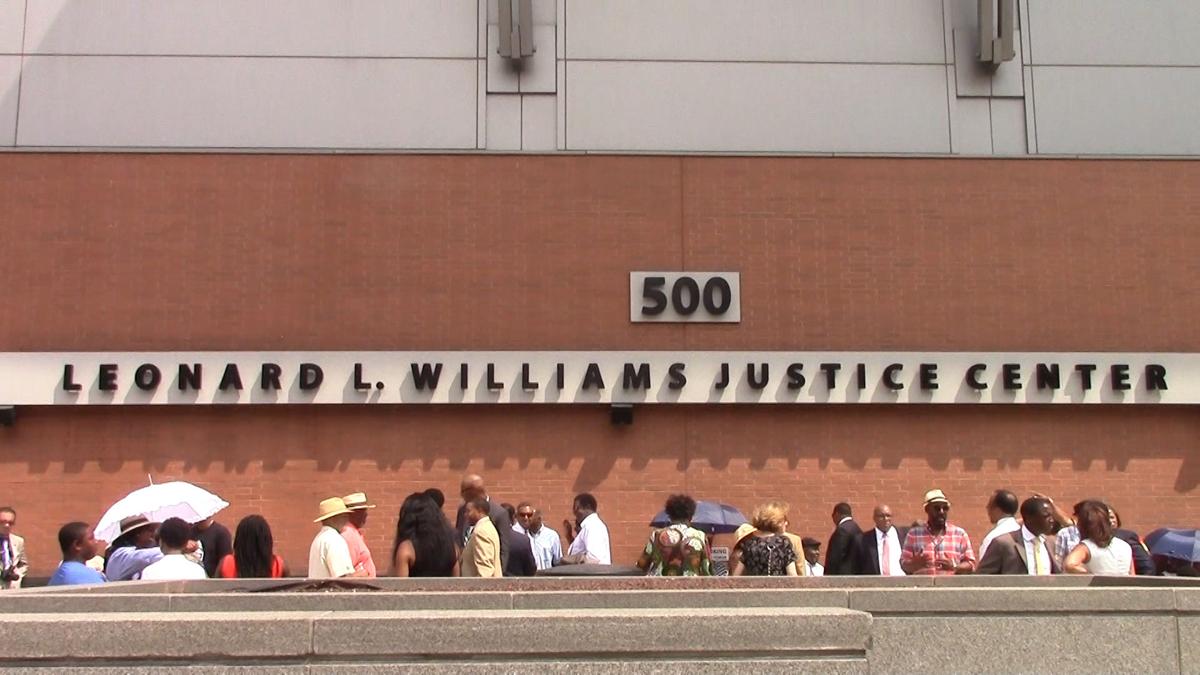 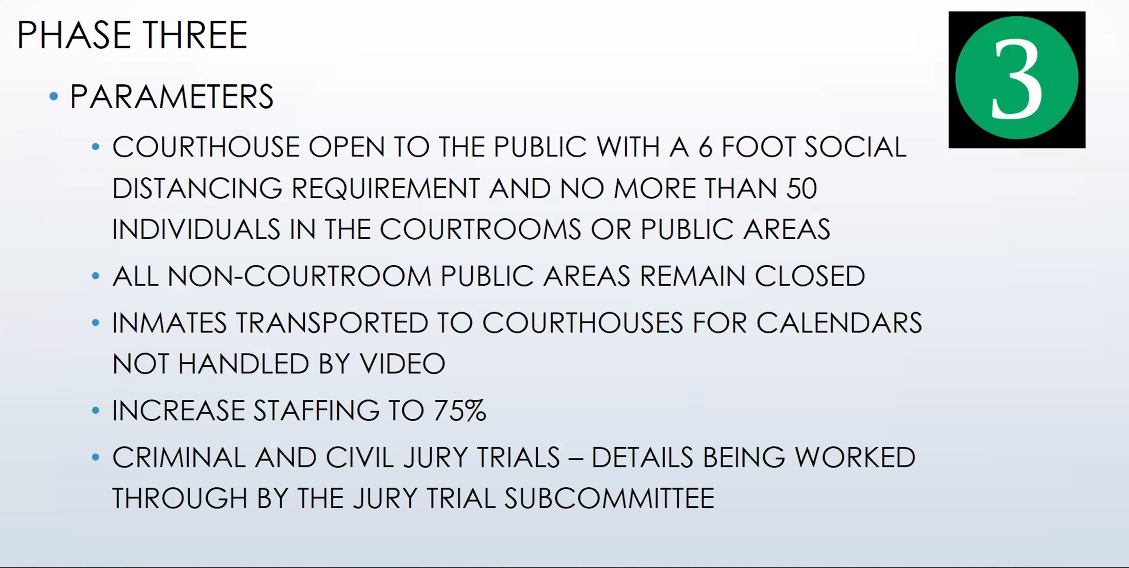 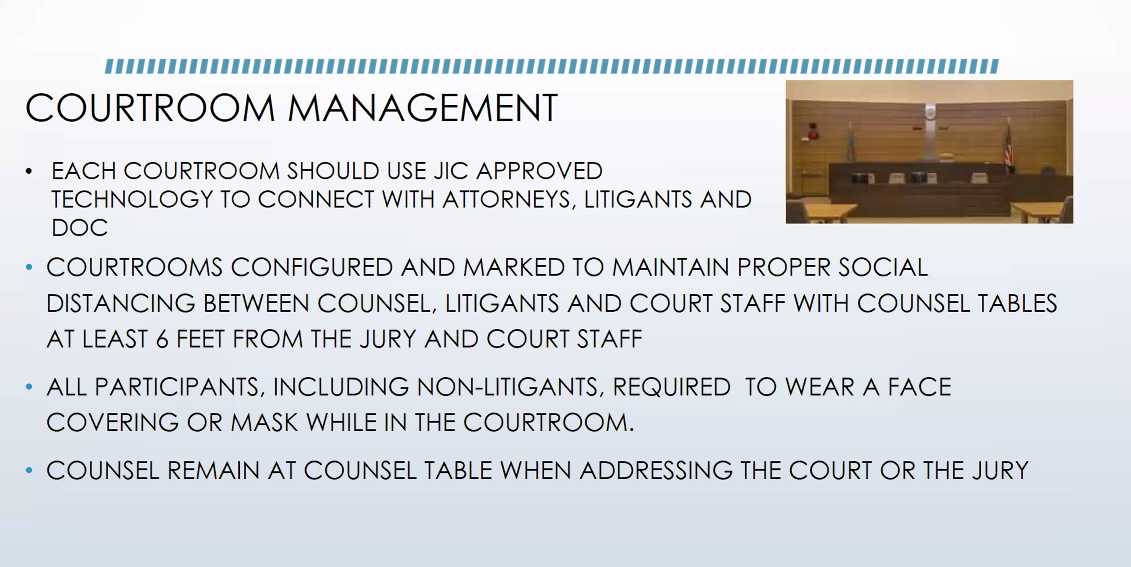 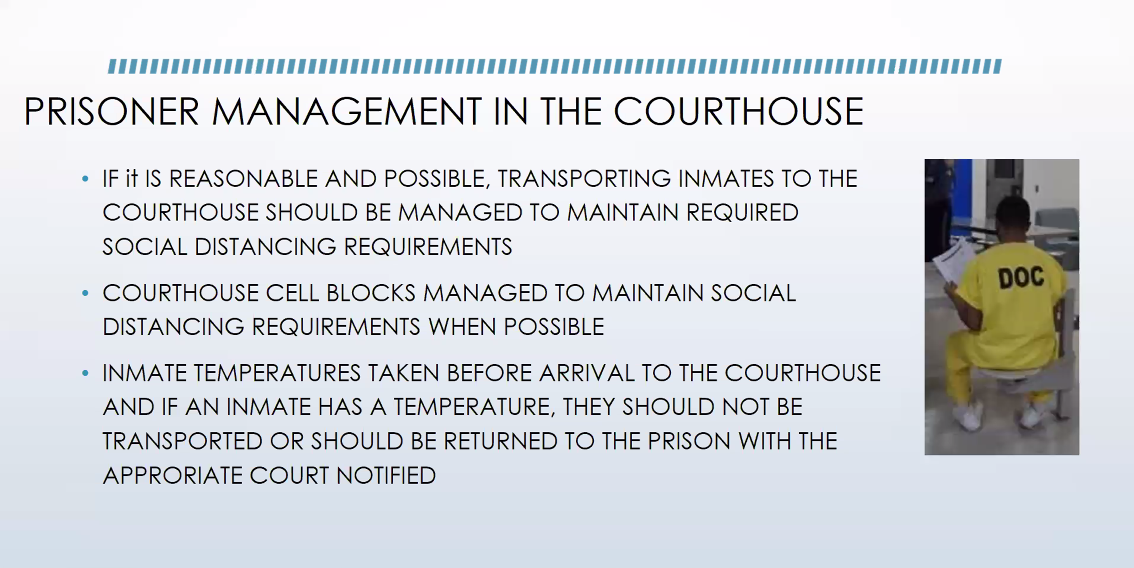 As Delaware slowly moves through the steps for its rolling reopening of the economy and all the institutions closed amid the novel coronavirus COVID-19 pandemic, among the bars, restaurants, and shops, people will also begin heading back to court.

"We're targeting June 8th as the opening of the courthouse for Phase I," Superior Court Judge William Carpenter Jr., Chair of the Courts Reopening Committee, said Friday. "That will mean that the attorneys will be allowed into the courthouse at that point in time. If everything runs smoothly, we have the equipment all set up, things seem to be working well at the entrance of the courthouse, we would move to Phase II the following week on June 15th. Obviously, if things are not working well, we would delay that, but that is the hope: Phase I, June 8th, Phase II, June 15th."

Like everything else, the courthouse will reintroduce visitors in a tiered capacity. Like restaurants, which will limit occupancy to 30% of fire code guidelines, the court system will permit reentry based on role within the system, first opening up attorneys will be permitted into the building, but incarcerated individuals will be hosted via video conference.

With a six-foot requirement between all individuals to adhere to social distancing guidelines, physical bodies within a courtroom at any given time will also be limited. While Phase II initially bars more than 10 non-court-related individuals in a room at a time, Phase III opens up the reintroduction of jury trials when those permitted increases to 50. Judges will also recognize the constitutional need for a lawyer and client to sit closely together during a trial to discuss matters.

"No jury trials, obviously, with only 10 people in the courtroom.," he said. "That would be impossible in this phase. We then go to phase three. That allows for a increase in the number of people that are allowed in the courtroom to 50, and that will allow us to begin doing jury trials."

Court employees will have separate entrances than the general public, and the dates for later phases are more fluid as officials would like to monitor how the court system is operating with the first couple phases in place--though, tentatively, Phase III could be introduced around June 22nd or 23rd, which would allow for Grand Jury selections again.

But for the time being, temperatures will also be checked as attorneys and employees enter the buildings, and anyone displaying symptoms or answering entry questions in an affirmative when it relates to experiencing symptoms may be denied entry to the building for a period of seven to 14 days in order to self monitor and ensure they are not positive for the virus.

"To some degree, we're going to rely upon the attorneys to self-monitor for symptoms," Carpenter said. "Obviously, they won't be allowed back in if they continue to have a temperature. We're generally seeing that...somebody has a temperature, they ask them to monitor themselves for seven days and, after seven days, they perhaps can come back in if no symptoms have appeared. So, the expectation would be that we would ask you to stay away from the courthouse for a period of time, at least until you're confident you have no symptoms that would reflect that you're been infected."

Despite those precautions in place, Carpenter advised against trying to return all the way to how things worked previously. In order to protect everyone, any task capable of being completed electronically, should be.

"We would strongly suggest that we not go back to the old ways just because we've hit these phases we' have been forced as a court and as attorneys to try matters we've never had been able to do, or never wanted to do, in the past, through technology and remote processing. We found now that we can do them, and we can do them well. And that even when we reach this phase we should continue, to the degree that we can, to continue to use the electronic medium to handle matters."

He also said the courts within each courthouse are going to have to collaborate on what they do and when. With limitations on crowd sizes, courtrooms will need to cooperate on what is scheduled on their individuals calendars to keep visitors to the building safe.

"We simply are not able to all do whatever we wanted to do, whenever we want to do it," he said. "If we did that, there would be way too many people in the courthouse at the same time, there'd be too many people waiting for court proceedings. So, each court is going to have to take a look at their calendars and spread them out, not do these large, cattle-call calendars anymore, and coordinate with the other courts so, again, we're limiting the number of people in the courthouse."

Carpenter added they're looking at methods now which could be used to institute a high level of continuation, should the courthouses be forced to shutter again if COVID-19 makes a comeback at a later time.

"The committee is going to look at the worst case scenario: the virus spreads tremendously again, we have to close the courthouse," he said. "What steps do we need to take now, to actually do those proceedings in electronic format."