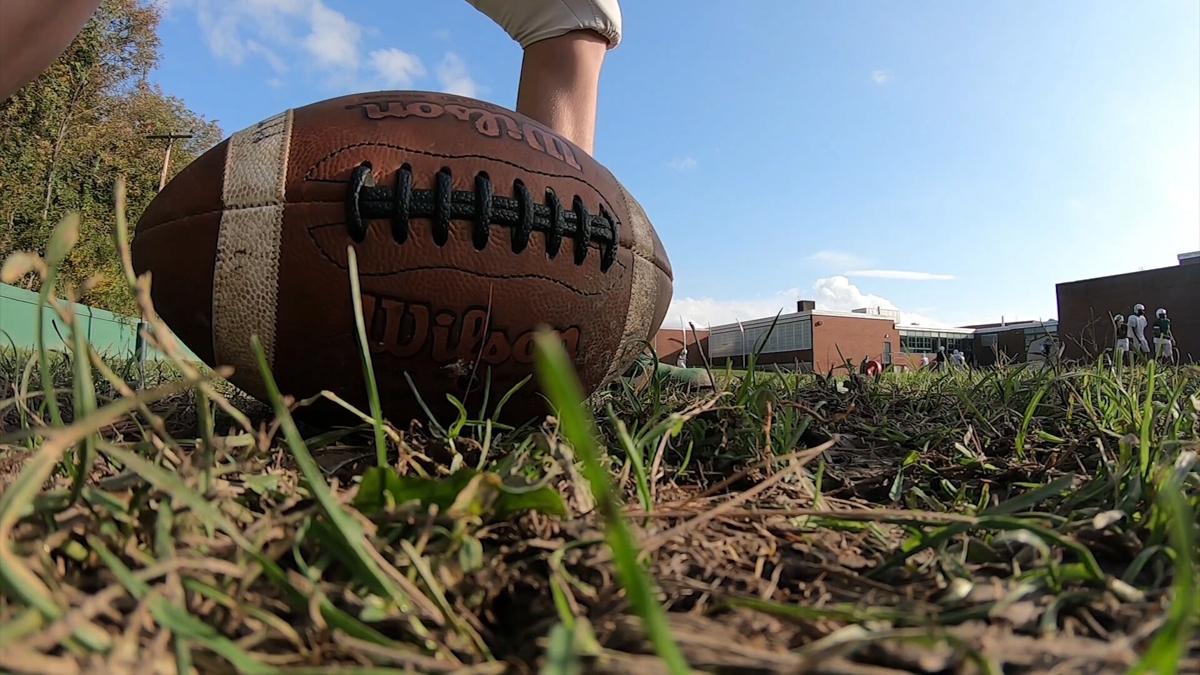 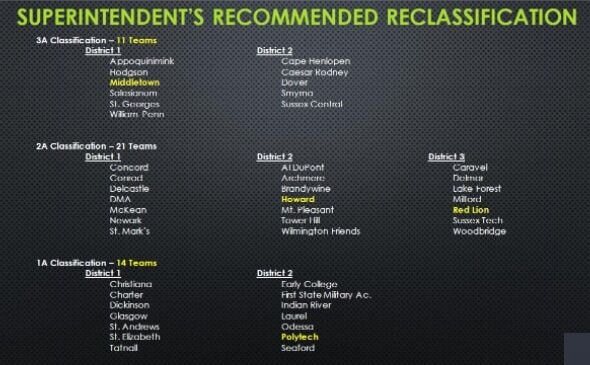 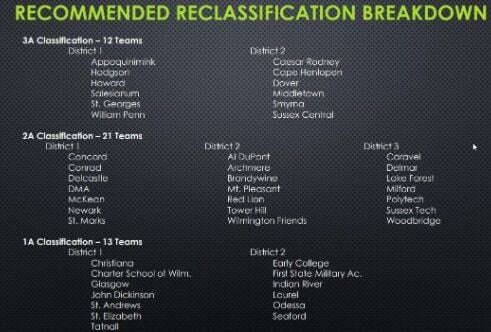 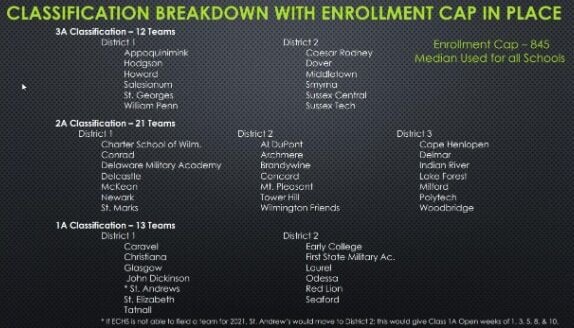 Delaware Association of Athletic Directors football realignment scenario 2 - mandates that schools above the median enrollment in Delaware could not be in Class 1A. No restriction on 3A.

An expected vote on various Delaware high school football realignment plans was tabled by the DIAA Board following concern that non-public schools didn't get ample notification of proposals.

The center of discussion of the board was the status of two-time defending state champion Howard, who has dominated the smaller Division 2 in recent years, going 28-4 the past three seasons, and 44-12 over the past five years.

At 875 students, Howard would be by far the smallest 3A school under the three-tiered realignment proposals being passed around by various parties.

The current Delaware Association of Athletic Directors realignment proposal would keep Howard in 3A, while Polytech, a struggling Henlopen North team in Division 1, would be in 2A, largely due to its 1,185 student enrollment.

Delaware's public school superintendents received that proposal and discussed it this week, but could not come up with a unanimous decision for their own proposal, according to new DIAA Board member Dorrell Green of the Red Clay School District.

The superintendents dropped Howard from 3A, but did not choose to leave the 12th slot in 3A vacant, creating even greater potential scheduling difficulty at the top level.

They also slid Polytech from 2A to 1A.

DAAD also showcased a proposal, that they're not recommending, that would put a 875-maximum enrollment on 1A schools.

That plan would block Wilmington Charter from being a 1A school, and replace them with Caravel. Indian River and Laurel would also swap places, with Laurel going to 1A if the cap were put in place.

Sanford Athletic Director Stan Waterman and Early College High School Charter School leader Evelyn Edney said they heard from their private and charter school colleagues that they were not hearing from DAAD, and finding out about proposals when they were announced at DIAA Board meetings.

DAAD told the DIAA Board they would attempt to schedule a virtual meeting with interested private and charter school leaders for their input before the next DIAA Board meeting on February 11, where a potential vote could take place.

In addition, the DIAA Board also approved an updated return-to-play protocol for athletes who test positive for COVID-19 starting on February 10.

Following a positive result, an athlete would be required to be cleared by a qualified healthcare provider, and a 10-day waiting period would be required, including being symptom free for at least seven days.

At that point, an athlete would then begin a five-day progressive program starting with 10 minutes of light exercise and working up to a full practice before they could then return to competition, no earlier than 15 days after the initial positive test.

This policy would be in effect for all DIAA schools, but does not cover physical education classes, which goes under the Department of Education's jurisdiction, or club sports, which are not under the DIAA's umbrella.