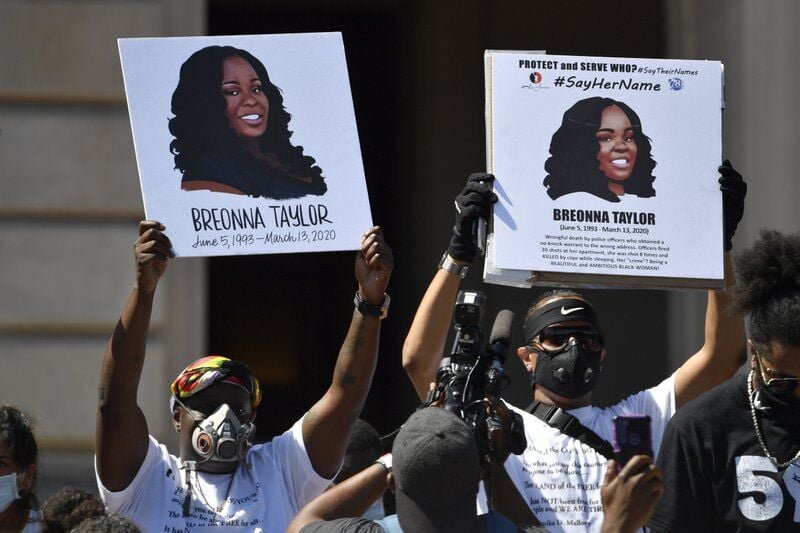 FILE - Signs are held up showing Breonna Taylor during a rally in her honor on the steps of the Kentucky State Capitol in Frankfort, Ky., Thursday, June 25, 2020. The city of Louisville will pay several million dollars to the mother of Breonna Taylor and install police reforms as part of a settlement of a lawsuit from Taylor’s family, The Associated Press has learned. 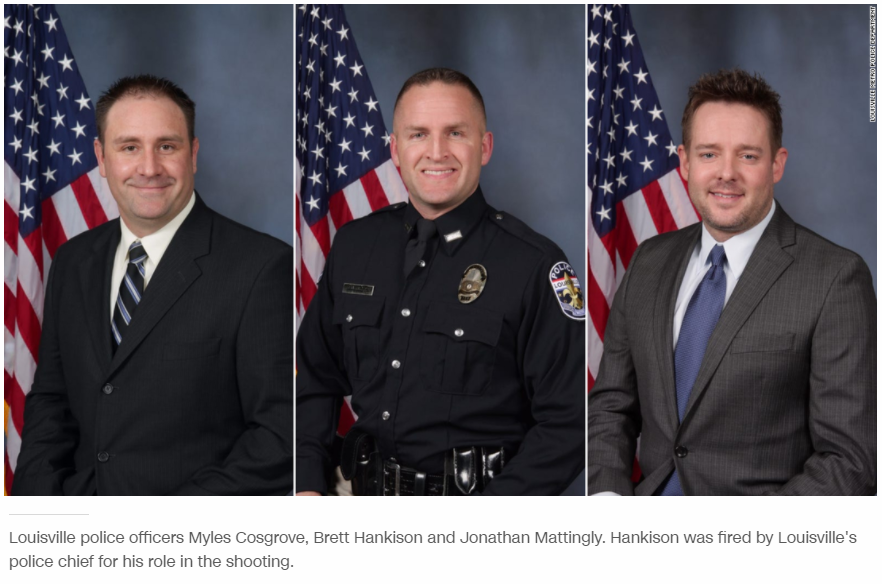 A former Louisville police officer has been indicted by a grand jury on three counts of wanton endangerment in the first degree in connection with the fatal shooting of Breonna Taylor.

The long-awaited charges against the former officer, Brett Hankison, were immediately criticized by demonstrators who had demanded more serious counts and the arrests of the three officers involved in the March shooting.

The other two officers -- Sgt. John Mattingly and Det. Myles Cosgrove -- were not charged following months of demonstrations.

The findings of the grand jury probe into the fatal police shooting announced by Kentucky's Attorney General Daniel Cameron Wednesday afternoon. He called the Taylor's death "a gut-wrenching emotional case" where "the pain is understandable."

Demonstrators at makeshift memorial to Taylor in downtown Louisville called for Cameron to step down after the charges were announced in court and the former's detective's bond was set at $15,000.

The charges come more than six months after Taylor, a 26-year-old Black EMT and aspiring nurse, was shot to death by Louisville police officers in her home. The officers broke down the door to her apartment while executing a late-night, "no-knock" warrant in a narcotics investigation on March 13.

The grand jury was to present its report to Jefferson County Circuit Judge Annie O'Connell at 1:15 p.m., according to a statement from the Administrative Office of the Courts. Cameron's news conference is scheduled for 1:30 p.m.

Depending on the grand jury's findings, Cameron's options range from declining to prosecute to charging one or more officers.

Louisville has prepared for the possibility of unrest from the decision. For months, protesters have criticized the length of the investigation and demanded the arrests of all officers involved.

The Kentucky National Guard has been activated, Schroeder said.

"I urge everyone to commit once again to a peaceful, lawful response, like we've seen here for the majority of the past several months," Fisher said.

The city and the police department had already declared states of emergency and set up barricades restricting vehicle access to downtown areas. Stores and restaurants have boarded up their windows, and some federal buildings closed for the week. Protesters started gathering Wednesday morning, hours before the expected announcement.

Taylor's death set off outrage across the country, chants of "say her name," calls to arrest the officers, and a renewed focus on the Black women killed by police. Her story gained wider attention during nationwide demonstrations that followed the late May killing of George Floyd at the hands of Minneapolis police.

Cameron, the first Black person to hold the post and a Republican rising star, was made a special prosecutor in the case in May, and the FBI opened an investigation as well.

A day after the grand jury convened, one officer who fired into Taylor's home -- Sgt. Jonathan Mattingly --- sent a mass email to the department early Tuesday defending his actions and slamming the city's leadership.

In June, Det. Brett Hankison was fired for "wantonly and blindly" firing into Taylor's apartment, Louisville's police chief said. Six officers involved in the incident are under internal investigation, LMPD said on Tuesday.

The city of Louisville announced on Sept. 15 a historic $12 million settlement of the family's wrongful death lawsuit. The city also agreed to enact police reforms which include using social workers to provide support on certain police runs and requiring commanders to review and approve search warrants before seeking judicial approval.

Police believed Taylor was home alone when she was in fact accompanied by her boyfriend, who was legally armed, according to a CNN review of the shooting. That miscalculation, along with the decision to press forward with a high-risk, forced-entry raid under questionable circumstances, contributed to the deadly outcome.

Taylor's ex-boyfriend was the actual focus of a narcotics investigation that led officers to execute the warrant on her apartment, where no drugs were found.

Police said a man was shipping drugs to Taylor's apartment to avoid detection of a trafficking ring, according to a police affidavit for a search warrant, which was obtained by CNN.

The search warrant authorized police to search Taylor's apartment, two vehicles, and three people, including Taylor, and to seize, among other things, drugs and drug paraphernalia, money, safes, weapons, documents and computers. The warrant did not specifically connect Taylor to any alleged drug activity, and Taylor's family and their attorney have maintained that she was not involved in her ex-boyfriend's alleged drug trade.

Taylor was sleeping next to her boyfriend, Kenneth Walker III, in the early hours of March 13, and when they heard a noise they both got up and walked to the door.

"She's yelling at the top of her lungs — and I am too at this point — 'who is it?' " recalled Walker, her boyfriend. "No answer. No response. No anything."

Walker told investigators when he heard banging at the door his first thought was that it was Taylor's ex-boyfriend. He was concerned there might be trouble, so he grabbed his gun.

As Walker and Taylor made their way down a hallway toward the front door, Walker said, the door flew off its hinges.

After the officers used a battering ram to enter, Mattingly was shot in the leg, severing his femoral artery, he told investigators.

He and two other officers -- Hankison and Det. Myles Cosgrove -- then discharged their weapons, according to the CNN review. Taylor was killed in the barrage of shots from the three officers. Walker, who was unharmed, dialed 911 and told the dispatcher someone had kicked in the door and shot his girlfriend.

"Sgt. Mattingly was following orders of superior officers, was not involved in the planning process of the arrest, and at all times followed established police procedures," McMurtry said.

Walker was arrested and, six days later, indicted for the attempted murder of a police officer. The Louisville area's top local prosecutor later agreed to have the indictment against Walker dismissed.

The chaotic police operation that night was exacerbated by Hankison, who was accused by his own department of "blindly" firing 10 rounds into Taylor's apartment from an outdoor patio. Hankison has since been fired and is appealing his termination. His attorney, David Leightty, has declined comment.

Schroeder, the interim police chief, wrote in a June letter that Hankison violated standard operating procedure when his "actions displayed an extreme indifference to the value of human life" when he "wantonly and blindly fired ten (10) rounds" into Taylor's apartment.

Some rounds reached an apartment next door, "endangering the three lives in that apartment," Schroeder wrote. The chief called the officer's conduct "a shock to the conscience."

The officers were not wearing body cameras, police said.

Schroeder wrote that Hankison was disciplined in January 2019 for reckless conduct that injured an "innocent person." He gave no other details.

"I cannot begin to imagine Ms. Palmer's pain," Fischer said, referring to Taylor's mother. "And I am deeply, deeply sorry for Breonna's death."

Taylor, described by relatives as a hard-working, goal-oriented young woman who placed an emphasis on family, had been working as a certified emergency medical technician at the time of her death.

Walker has also filed suit, saying he "lives in constant fear" since he was arrested -- wrongfully, he claims -- for allegedly shooting one of the Louisville officers. LMPD has declined comment, citing the ongoing investigation and pending litigation.

Walker said in the $10.5 million suit that he was maliciously prosecuted for firing a single bullet with his licensed firearm at "assailants" who "violently broke down the door" after midnight that March.

A portrait of Taylor was featured on the cover of the September issue of Oprah Winfrey's "O, The Oprah Magazine," the first time in the magazine's history that anyone but Winfrey has been on the cover. The magazine put up 26 billboards -- one for each year of her life -- around Louisville calling for the officers involved in her killing to be arrested and charged.

Other celebrities have also sought to keep the case in the spotlight, including NBA superstar LeBron James, who -- along with his Los Angeles Lakers teammates -- donned the MAGA hats worn by Trump supporters with the message: "Make America Great Again Arrest The Cops Who Killed Breonna Taylor."