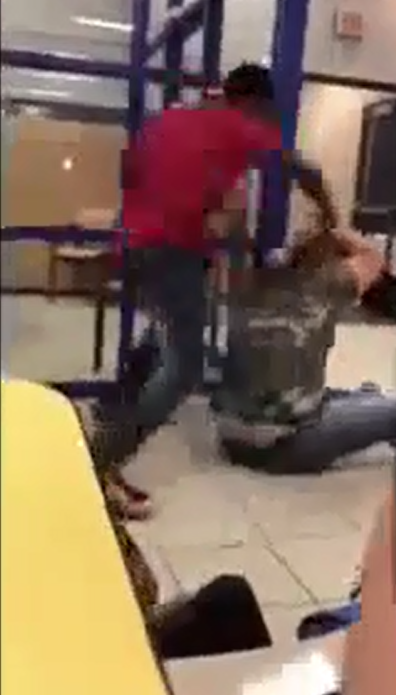 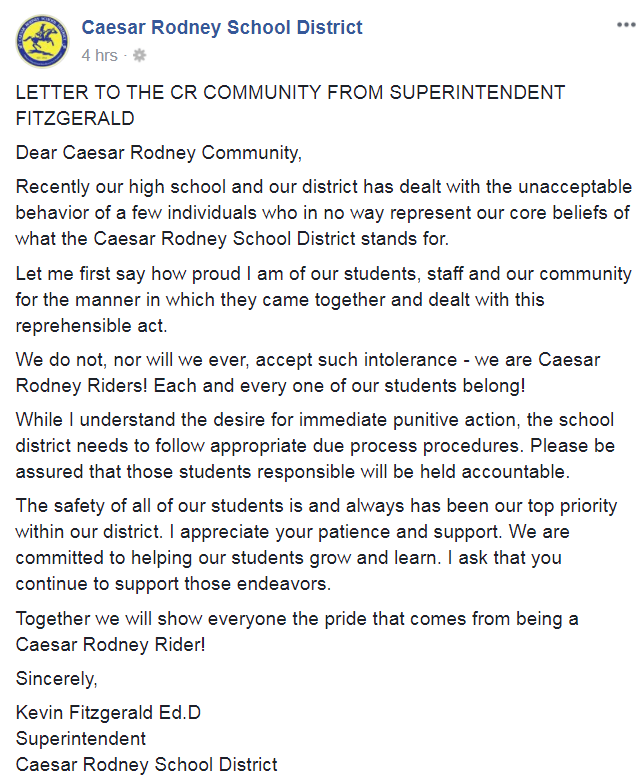 Graphic video captured on a student's cellphone and obtained by WDEL shows a student with disabilities being brutally beaten in Caesar Rodney High School's cafeteria.

The victim in the video is a freshman.

"His mother called me and said that she had received a phone call from the school that her so had been hit from behind, and that they needed to take him for medical treatment for his head injury," explained the boy's parent advocate, Diane Eastburn, who represents 108 families who have students with disabilities in three states.

The fight on Tuesday, October, 3, 2017, was sparked by name-calling at the lunch table, Eastburn said.

"A student walks up to him makes a comment about 'being a bitch,' and then he calls the other kid 'a bitch,' and the word 'bitch' gets thrown back and forth, but nothing that the student took very seriously; more of, probably, it was just happening in jest," she said.

"It ended, then the student reappears from behind him, hits him in the head, knocks him out of where he's sitting, and then he's on the floor."

That's where the cellphone video begins.  It lasts for about 13 seconds.

"And you see him getting pulverized."

The student was repeatedly being punched in the back of the head as he used his hands to cover his head. The victim student suffered bumps and bruises to his head and face in the assault.

Eastburn said the boy's mother asked to see video of the assault.

"[The school] said that they have spotty cameras throughout the building and do not have video of the actual incident," she said. "So basically, it was a 'his word against his word' incident until a video from a student who was a witness to the fight surfaced online."

He was also punished with a two-day in-school suspension for being involved in a fight that included foul language. The boy's mother is appealing, and a hearing is set for next week.

WDEL has not been able to successfully identify the other student in the video, and it's unclear what punishment that student may have been given.  But Delaware State Police told WDEL the 15-year-old boy was charged with offensive touching and was released to the custody of a parent.

Master Corporal Gary Fournier told WDEL the charge was determined at the time of the fight, before the cellphone video of the incident surfaced.

"The case is now in the hands of the courts," he said.

The incident is not related to the racially-charged photo of a Caesar Rodney's Riders mascot, which left two Caesar Rodney students suspended, but not facing criminal charges.  But both instances in the course of one week could be illustrative of a growing divide in the school, Eastburn said.

"There seems to be an underlying hostility in that building," alleged Eastburn. "And if they're having problems they need to address it quickly. To be quite honest, they can't afford not to.  If they start having fights like this, someone's going to get hurt or worse.  These are lawsuits waiting to happen if they don't start dealing with the undercurrent in that building."

The school district had no comment.  After WDEL published its story, the school responded on its website:

"Recently a fight that previously took place in the Caesar Rodney High School cafeteria has been posted to the internet.  This situation in no way is related to the recent mascot post. After an investigation by the school administration and the Delaware State Police, disciplinary action was taken and an arrest was made.  Fights of this nature, while rare are unacceptable and are not tolerated in Caesar Rodney. The district will continue to work hard to insure [sic] the safety of our students."

"We do not, nor will we ever, accept such intolerance - we are Caesar Rodney Riders! Each and every one of our students belong!" said Caesar Rodney Superintendent Dr. Kevin Fitzgerald.  "While I understand the desire for immediate punitive action, the school district needs to follow appropriate due process procedures. Please be assured that those students responsible will be held accountable."

"Nobody should have to go to school and be in fear," said parent advocate Diane Eastburn.