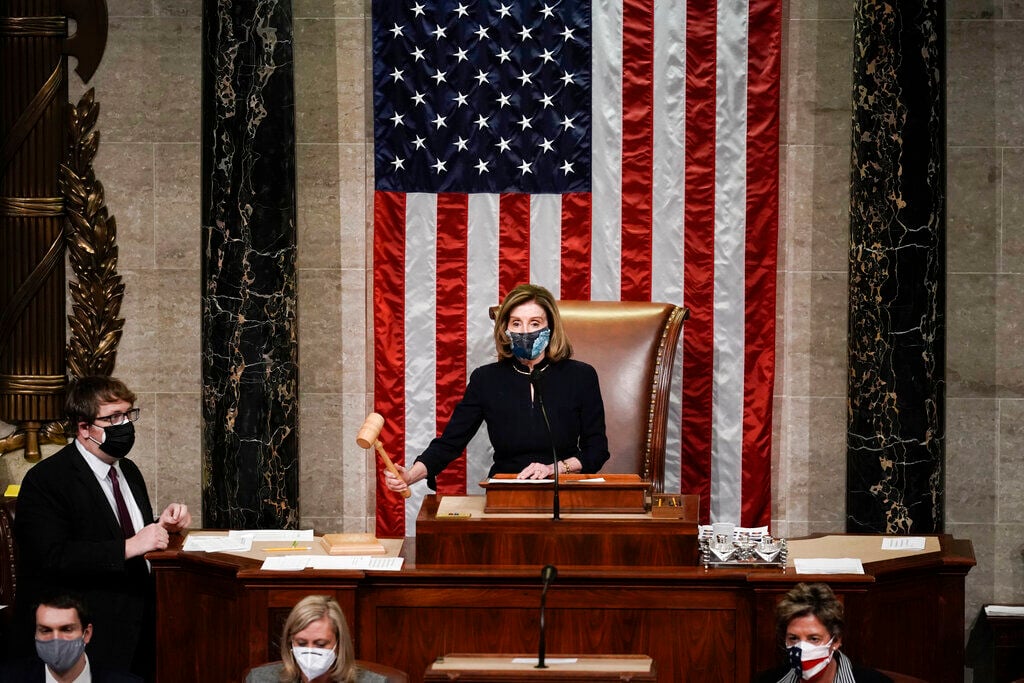 Speaker of the House Nancy Pelosi, D-Calif., gavels in the final vote of the impeachment of President Donald Trump, for his role in inciting an angry mob to storm the Congress last week, at the Capitol in Washington, Wednesday, Jan. 13, 2021. (AP Photo/J. Scott Applewhite) 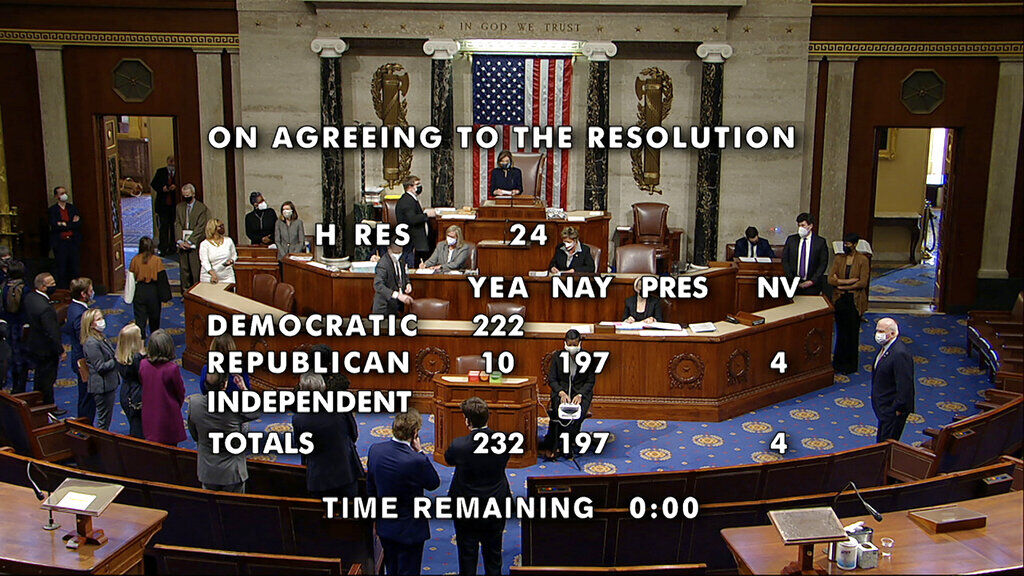 In this image from video, the final vote total of 232-197 to impeachment President Donald Trump over the violent siege of the Capitol, after voting on the House floor Wednesday, Jan. 13, 2021, on Capitol Hill in Washington. (House Television via AP)

The House has just voted to impeach President Trump for the second time – making him the only US president to ever be impeached twice.

The impeachment resolution the House voted on charges Trump with a single article, "incitement of insurrection" for his role in last week's deadly Capitol riot.

There is no such thing as a routine impeachment but this one is unprecedented in all sorts of ways.

The overall impeachment process laid out in the Constitution is relatively simple:

Delaware's U.S. Congresswoman Lisa Blunt Rochester voted in favor of of impeachment for incitement of insurrection.

“One week ago, violent rioters, inspired and incited by the President of the United States, stormed the Capitol in an attempted violent insurrection. While I have long believed that Donald Trump is unfit for office but the attack of January 6th displayed that he represents a clear and present danger to our country. His actions were so egregious and dangerous they demand the most serious response afforded to the Congress under our Constitution, delivered as swiftly as possible," she said in a prepared statement." Today, I voted to impeach Donald Trump because our nation cannot afford to have him in office another day longer. Before our country can reach reconciliation, we must recognize our truths. Before we can heal and unite, we must require accountability. The rioters tried to shake us, but they did not break us, and today, in the cathedral of our democracy that those rioters stormed, we voted to hold Donald Trump accountable.”

Ten Republicans joined their Democratic colleagues in voting in favor of the impeachment resolution.

This impeachment process will feel entirely new and different from the one we saw in late 2019 around the Ukraine investigation, most notably because the Senate trial is expected to occur after Trump leaves office.

New President Joe Biden will be asking the Senate to vote on his Cabinet nominees and act on legislation to address the COVID pandemic as well as relief for Americans hurt by the troubled economy.

In 2020, Senate business ground to a complete halt during the trial. This time, incoming Senate Majority Leader Chuck Schumer is hoping to pursue a half-day schedule to conduct the trial part of the day and business the rest of the day.

The charges this time are much simpler to convey and understand, however. It should still take some number of days with Chief Justice John Roberts presiding and senators sitting in judgment. When both of the new Democratic senators from Georgia are seated, it will take 17 Republicans voting with Democrats to reach a two-thirds majority and convict Trump.

The swift effort to impeach him certainly puts Trump in the position of wanting to keep Republican senators on his side. In that regard, it would keep him in check during the last week of his presidency.

Barring him from further office could also cost him his more-than $200,000 per year pension if the Senate wants to take that way.