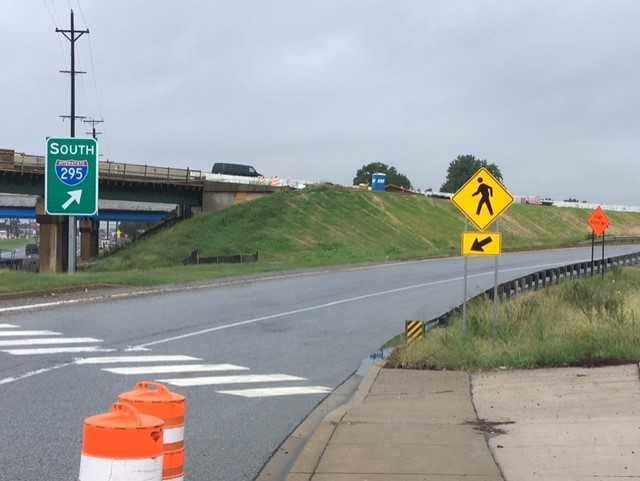 The access ramp to southbound Interstate 295, from southbound US Route 13, was scheduled to be closed for two weeks beginning on Tuesday, September 25, for rehabilitation.

The access ramp to southbound Interstate 295, from southbound US Route 13, was scheduled to be closed for two weeks beginning on Tuesday, September 25, for rehabilitation.

A regularly used access ramp to southbound Interstate 295 near New Castle was scheduled to be fully shut off to traffic on Tuesday, as the next phase for the multi-year reconstruction project along the corridor.

The Delaware River and Bay Authority advised the closure would take place during the morning commute on September 25, 2018. However, due to persistent rain during the early part of the week, DRBA adjusted the closure to occur on Thursday, September 27 instead.

During the closure, the contractor--Mumford and Miller Concrete, of Middletown--will reconstruct what's commonly referred to as the Hospital Ramp, due to its proximity to the Delaware Health and Social Services' Herman M. Holloway, Sr. campus.

"It's being rehabilitated to [bring it] into compliance with today's standards. So it's not going to move anywhere," Jim Salmon, DRBA Public Information Officer, described.

Even with the suspended closure this week, DRBA anticipated a condensed timeline for the project.

"This is only a two week closure. We are slated to open it up October 9th," Salmon indicated. "[And] it should not substantially impact commuters or those that use that ramp as the detour is minor in length and also there is a light that was installed to make that transition easier."

The traffic signal-- which was put in operation at the crossover point located just south of the I-295 overpass in Wilmington Manor--will enable traffic from southbound US-13/North duPont Highway to access the interstate from another leg on the reconfigured Farnhurst interchange.

"The detour will be signed appropriately," Salmon confirmed. "Motorists should get on Route 13 northbound and you'll be able to enter I-295 southbound at the new ramp that was just opened a few months ago."

Despite this latest development for motorists, the entire corridor is nearly completed after a 15-year, $90 million investment.

"We're approaching the finish line for this project," Salmon promised. "We're on track and on schedule to complete this project by the end of this year."

I-295 Corridor Reconstrux: The final phase of a multi-year, $90M reconstruction project for Interstate 295 is set to begin