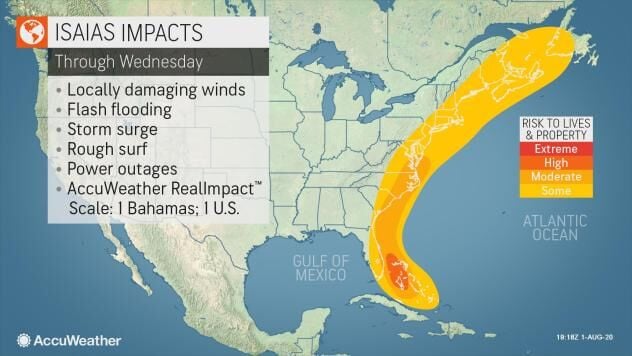 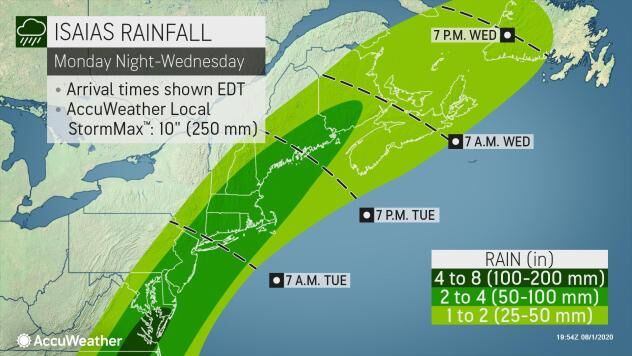 Isaias was downgraded this afternoon from a hurricane to a tropical storm, but it’s likely to strengthen back into a Category 1 hurricane later this evening or tomorrow morning.

It could reach our region by Tuesday, and could bring flooding due to heavy rains. As of Saturday night, the storm is moving slowly northwest, around 9 mph, between the Bahamas and the Florida coast.

Tropical Storm Isaias crossed over Hispaniola Thursday night, but its future impact for the …

RAINFALL: 2-4 INCHES The worst impacts of Isaias could come late Tuesday afternoon through Tuesday night, in the form of fresh water flooding due to heavy rainfall. Between 2 and 4 inches of rainfall, or more, are possible from Tuesday morning through Tuesday night. The greatest threat for flash flooding will be across Philadelphia, the northern and western suburbs, Berks County and the Lehigh Valley, northern Del., and western New Jersey. Watch out for streets prone to flooding and areas along streams and rivers.

Rainfall will be heaviest Tuesday afternoon through very early Wednesday morning. Areas of South Jersey, and the Del. & NJ beaches will see 1-3 inches of rain. These areas can handle much more rain, so flash flooding from rainfall is less likely.

WIND: 30-50 MPH, STRONGEST AT THE SHORE: Strong gusty winds are likely Tuesday, especially the evening and night. The exact track of “Isaias” will determine how strong winds get and who gets the strongest winds. South Jersey, the Jersey and Delaware beaches have the best opportunity for 40-50 mph wind gusts. Areas in and around Philadelphia are more likely to get 25-35 mph gusts. Power outages are possible across the entire area as trees can easily be knocked over when ground is saturated. If the track of the storm is farther to the east, the chance of power outages will go down significantly. Be sure to check NBC10.com/weather or the weather tab in the app in the coming days for the latest wind speed forecast.

SOME COASTAL FLOODING: At least some coastal flooding is likely during the time of high tide on Tuesday and Tuesday evening. A full Moon on Monday, Aug. 3rd, will keep tides astronomically high through the storm. The track and intensity of Isaias will determine the severity of coastal flooding, but residents of the Jersey Shore and Delaware beaches should be prepared for at least *some* coastal flooding. Once the center of Isaias passes to the north of us (early Wednesday morning), the threat of coastal flooding will quickly end. Right now, coastal flooding is not expected to be a major impact from this storm, but if that changes, we will let you know.

DANGEROUS RIP CURRENTS: A moderate risk for dangerous rip currents is in effect Sunday. Rip current risk will go to HIGH Monday, Tuesday, and likely into Wednesday. Swimming will be DANGEROUS. Swimming is not encouraged during this time and everyone must follow lifeguard instructions. Waves between 4 and 6 feet high will batter beaches and could cause beach erosion as well.

A FIRST ALERT for “Isaias” will likely be issued Sunday afternoon and evening once confidence is HIGH on the storm's track, and how intense it will be in our area.