"Support for adult recreational marijuana has been growing for years in Delaware and across the country. We have seen other states successfully enact policies that established a safe and legal market for cannabis, and we have studied those laws to craft the best policy for Delaware," said Brookside Representative Ed Osienski (D-Stanton). "We believe we have a solid bill that has the support of the public, and we believe we have the political will to pass this bill into law."

As chief sponsor for House Bill 150--known as the Delaware Marijuana Control Act--Osienski introduced on Thursday new legislation that seeks to legalize recreational marijuana for adult users. He hopes it will create an industry of good-paying jobs, adding hundred of millions in revenue to the state's economy. State Auditor Kathy McGuiness has said studies have shown legal pot could add at least $40 million to the state's economy.

“We would be establishing a new industry that will create good-paying jobs for Delawareans while striking a blow against the marijuana illegal market," he said. "We also listened to concerns from communities that have been historically impacted by the prohibition of marijuana, and to promote equity, we have included provisions so they can participate in this new market.”

Cannabis would be regulated and taxed in the same way as alcohol, with for adults 21 and older permitted to purchase up to an ounce from licensed retailers, and the Department of Safety and Homeland Security's Division of Alcohol and Tobacco Enforcement would absorb enforcement responsibilities under a newly created Office of Marijuana Control Commissioner. To fund enforcement, a 15% point of sale tax would be assessed, comparable to surrounding states but low enough to remain competitive with illegal market street values, Osienski said.

The state would issue 30 retail licenses in the first 16 months if the bill passed and would include a licensing pool of Social Equity Applicants to ensure those from disproportionately affected areas impacted by antiquated marijuana laws would benefit from the new business model creation. That's a new provision from the bill's previous iterations.

"The time has come for us to replace an illegal market that has overwhelmed our court system and damaged lives with a legal, regulated and responsible industry that will create thousands of good-paying jobs in Delaware,” said Dover Senator Trey Paradee, (D-Dist. 17), the bill's chief sponsor in the Senate. "We have seen the benefits of a thriving legal cannabis industry in 15 other states. We have had time to study what works and what does not. This legislation is sound economic policy, strong social justice reform and a job creator that we absolutely should pass this year."

There would also be a Microbusiness applicant pool created which would feature similar, but more costly, benefits as those found in the Social Equity program, and is responsible for the addition of more retail and cultivation licenses than previous versions of the proposed legislation had featured.

Previous non-violent marijuana-related offenses would also have an opportunity for expungement under the bill. Eligibility for expungement in the current version of the bill removes a stipulation that convictions had to occur prior to December 18, 2005.

Critics of the legislation include law enforcement and the business community. They've expressed concerns that legalization carries unknown health risks and would lead to more drug addiction and homelessness, decreased school performance and productivity, and more impaired-driving accidents.

"We haven't heard from [law enforcement] recently, so I don't expect any changing there, but we haven't addressed anything that makes consumption while driving legal, so everything that they implement now for impaired driving will stay the same," said Osienski.

Paradee said he's heard from members of law enforcement who want to see this measure passed.

"There are a lot of current and former law enforcement who are in support of legalizing recreational marijuana--some of them who are rank-and-file aren't really able to come out and make their opinions known," said Paradee.

The legislation also don't forbid businesses from setting and enforcing its own drug policies.

Both Paradede and Osienski said they believe they have the votes in both chambers to pass the legislation.

This time around, Osienski believes Governor John Carney, who's pushed back on legalization in the past, sees the writing on the wall in terms of what's happening in the surrounding areas and the benefits legalization has brought.

"If I could add to that, I think the governor, over the last several years that this issue has been kicked around, he has said that he's not supportive of it," Paradee said. "But he's never said that he would veto it."

"He supported decriminalization and an expansion of Delaware’s medical marijuana program. But he still has concerns about legalizing recreational marijuana," said Starkey.

HB 150 has been assigned to the House Health & Human Development Committee, and it will be heard in committee on March 24, 2021.

Here's some frequently asked questions about the legislation: 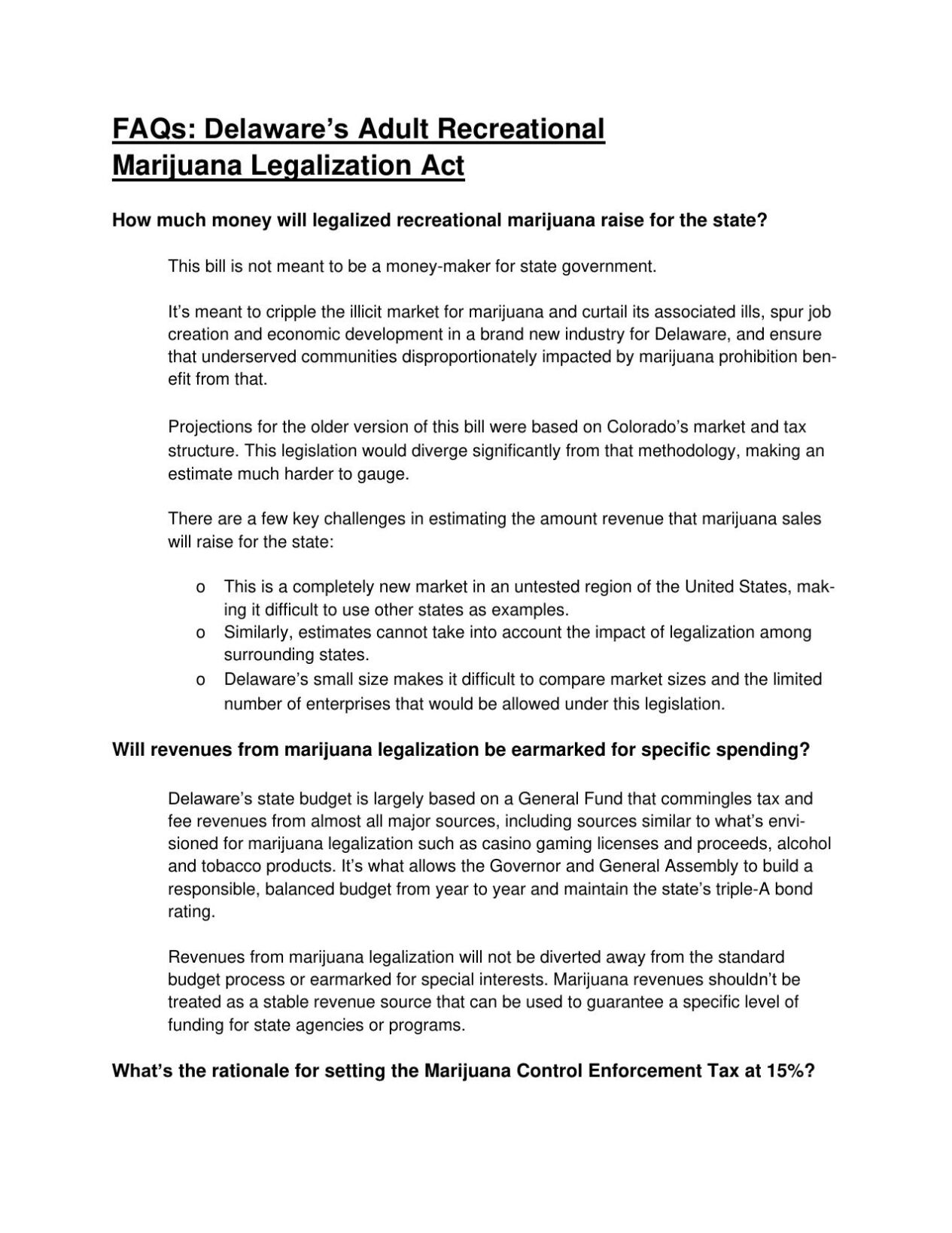 When lawmakers in the General Assembly reconvene in March, they'll likely be faced with anot…

Delaware's state legislature is taking another look at legalizing marijuana this session, and an advocacy group said there are strong economic…