Carney says, in 1 week, Delawareans are free to go maskless

A landlord in the Sparrow Run community in the Bear-area is accused of charging excessive rent to Section 8 residents.

Goodfish Enterprises, LLC and principal Christopher Lukacs are being sued in U.S. District Court because they allegedly falsified documents when trying to determine the federal assistance potential tenants would receive under the Housing Choice Voucher Program, also known as Section 8.

Under Section 8, a landlord who has multiple properties in an area is required to provide the three most recent rental agreements for similar properties, to then determine the rent and assistance for a renter. Lukacs owns more than 90 properties in Sparrow Run.

The civil complaint details two properties in Sparrow Run, where Goodfish supplied the three previous similar rents, but the government argues in one case that a four-bedroom, 1.5 bath house was described as "similar" to a three-bedroom, one-bath unit, creating a higher value for the average. In the second, the government said Goodfish used an October 2008 rental with a monthly rate of $1,100, neglecting two similar units that rented in 2013 for $925 and $975, again causing the average to rise.

The disputed amounts are being called violations of the False Claims Act.

In a phone interview with WDEL, Lukacs said he cooperated with the investigation, which he called "extortion by lawsuit."

"They did all my paperwork. They found two tenants. Most of my tenants pay $1,100 a month for a three-bedroom, one was paying $1,118, oh my God! Not only that, they also had a nicer house because it was redone. They think I'm overcharging, but I have nothing about the amount that they approve."

Lukacs disputed he was out to raise rents.

"I haven't done anything to charge more for Section 8 tenants because I can't because Section 8 gives me the amount. I hand them the paperwork, they say 'okay, we'll approve this amount,' and I'm like 'alright.' I have houses that people will move into without putting new carpet into, where Section 8 always gets new carpeting. They always get better stuff because they have the houses inspected."

He also said the government might have ulterior motives in singling him out.

"They thought I had something to do with the drug dealers in the neighborhood. They didn't go and do some research because I was almost murdered by one of them because I put cameras in front of my house, my whole house was shot up with bullets while I was in it."

Lukacs said that incident, eight years ago, led him to move out of Sparrow Run. He added Sparrow Run isn't an easy area to make a profit.

"Section 8 not only costs more, but they trash houses. It's just the neighborhood. Sparrow Run has been a mess for 40-50 years since it began. What they should have done 30 years ago was knock the whole thing down and put up a Wal-Mart. Instead they're blaming me for the drug dealers in the neighborhoods. I've been there 16 years, and they had the change the name three years before I got there because the neighborhood is so damn bad they couldn't get anyone to move into it."

Lukacs said Sparrow Run may be better served by going to a one-owner model.

"It's just a rough neighborhood. It's super-low income. It needs to be managed by one entire management company, not 50-100 different landlords."

Lukacs and Goodfish are facing possible civil penalties between $5,500 to $11,000 for the two alleged violations of the False Claims Act, plus unspecified compensatory damages. 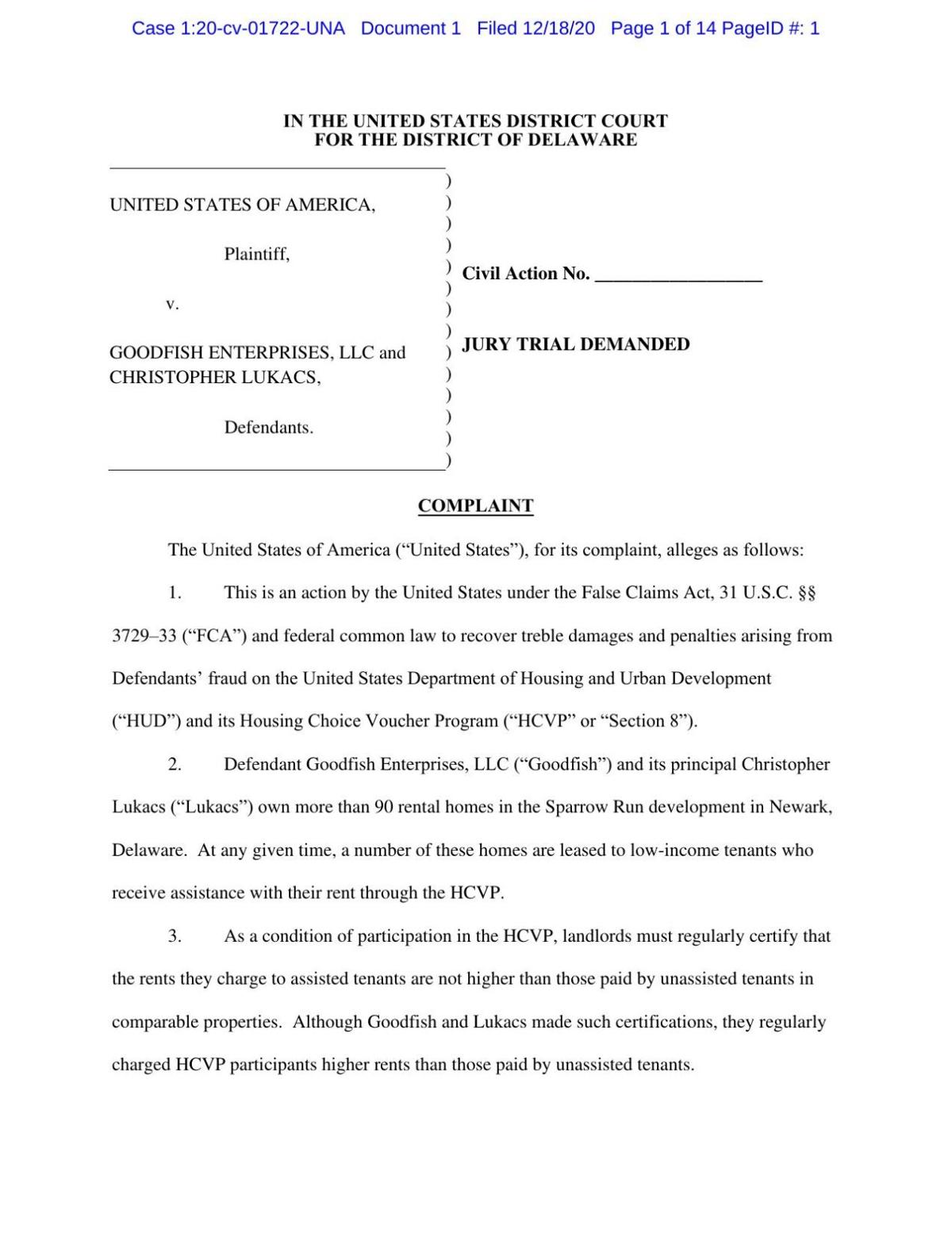