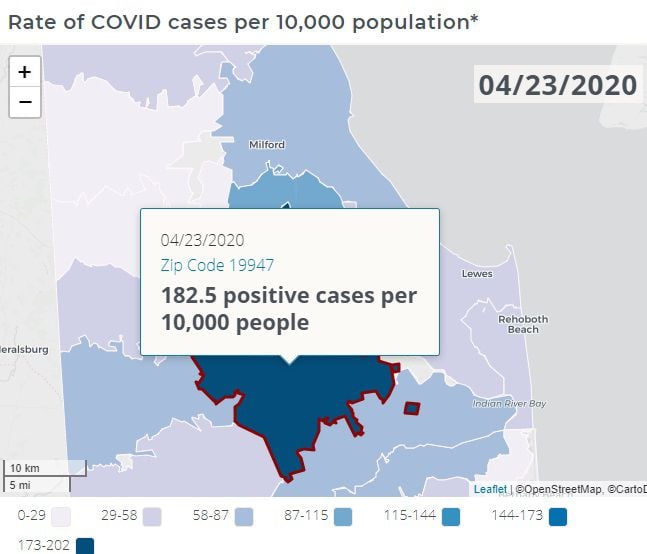 Correction: In a previous version of this story, the headline stated thee data was balanced by race, when it should have read it was broken down by race.

The Delaware Division of Public Health released greater breakdowns on Delaware's positive COVID-19 data on Friday, and it puts another light on the recent spike in Sussex County.

The newly expanded dashboard provides per capita breakdowns of cases by zip codes, a more balanced age spread, and data on the 75% of positive results where the race of the person providing the sample is known.

The breakdowns are reasonably similar in Kent and New Castle counties, but in Sussex County, it's a different story.

Of the 60% of the known races in Delaware's southern county, 25% are Hispanic/Latino, 19% non-Hispanic White, and 12% non-Hispanic Black.

According to the Census Bureau's 2018 Population Estimates Program, Hispanic or Latinos make up just 9.3% of the population in Sussex County, while Whites are 82.9%.

"There's intense focus on testing and outreach to the Hispanic, Haitian/Creole, and Caucasian poultry worker population in Sussex County. And that's taken a lot of our resources and a lot of our time, and we have a lot of time and work to do there, and are adjusting our plans based on what we see on the ground there in terms of test results."

While blacks have seen slightly more cases than whites in Delaware, when it comes to deaths, 61 of the 100 deaths have been non-Hispanic whites against 24 non-Hispanic blacks.

One area that Carney was pleased by is Delaware's testing of the African-American community, a number not shown on the website at the moment.

"The number of tests done for African-Americans is at a higher rate than their percentage in the population. That gives you a little bit of a confidence that it's maybe not a testing access problem. That doesn't mean we're not going to try to reach out to those areas, but it would really concern me if the rate was less than the rate of the population at 23%."

Sussex County also continues to see a much higher COVID-19 case rate than its other two counties.

In perspective, New Castle County's highest rate was in Claymont at 41.7, with north Milford leading Kent County at 72.8.

Age-wise, 18-49 was broken down in the new data for the first time.

The Georgetown/Ellendale/Millsboro corridor in Sussex County saw a record spike in novel coronavirus COVID-19 cases, according to data release…