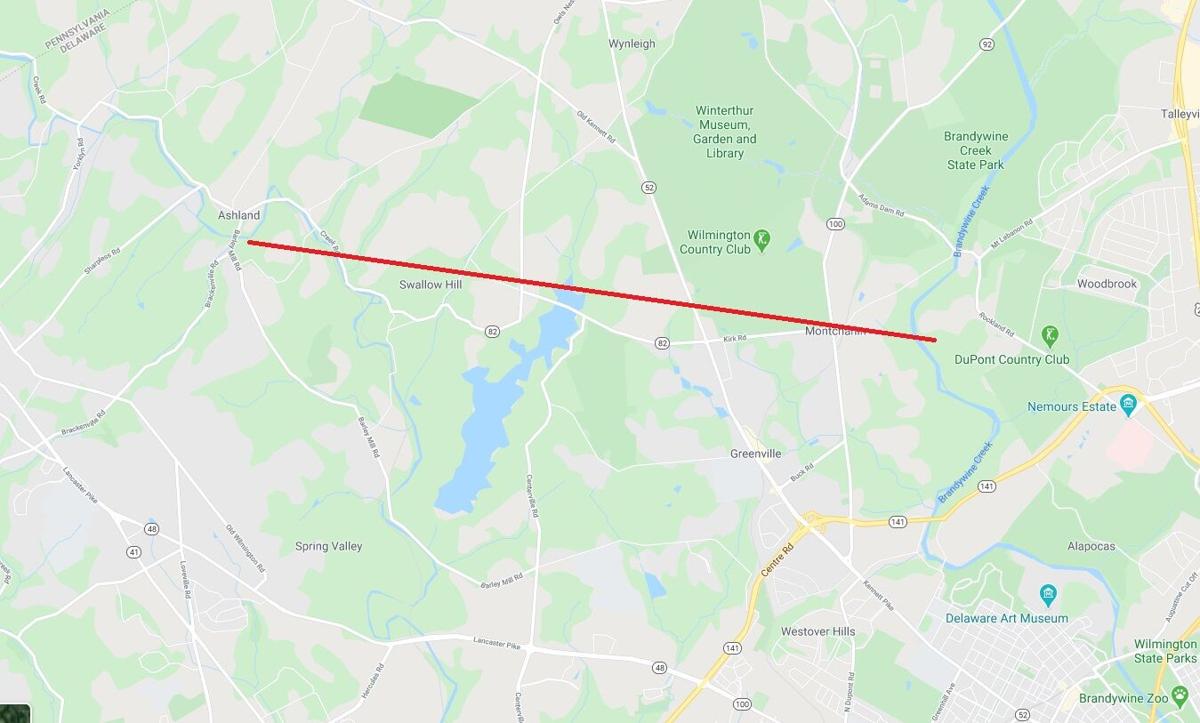 WDEL estimate of path of August 7, 2020 tornado north of Wilmington based on National Weather Service descriptions of damage

WDEL estimate of path of August 7, 2020 tornado north of Wilmington based on National Weather Service descriptions of damage

The National Weather Service has confirmed an EF-1 tornado was responsible for some of the damage connected to Friday's severe storms in northern New Castle County.

Officials said the tornado touched down at around 5:40 p.m. Friday, August 7, 2020 near the Ashland Nature Center near the crossroads of Brackenville Road and Barley Mill Road, beginning a 3.8-mile estimated path.

The tornado roughly paralleled Creek Road, approaching Swallow Hill, where there were trees down across Pyles Ford Road, with one tree striking the roof of a house. The wind speed there was estimated at 105 miles per hour.

The twister then continued easterly, going just north of Valley Garden Park and Campbell Road, with more trees down.

The debris continued as it crossed Kennett Pike between Kirk Road and the entrance to Wilmington Country Club, where an estimated 200 trees were damaged, NWS said in its assessment. The damage showed a convergent pattern that would be consistent with a tornado.

The tornado then continued towards Rockland, but no damage was noted in either the DuPont Country Club or further east at Route 202.

At the same time, there was a separate straight-line wind event south of the tornado that caused its own path of damage.

Trees were uprooted in both the Fairthone and Greenville Manor neighborhoods as the storm continued towards Buck Road and the Henry Clay neighborhood.

A tree was damaged on Rising Sun Lane that showed damaged indicative of close to 100 mile per hour winds according to the National Weather Service, but with the less extensive damage, the NWS kept the estimate for the straight-line wind event at 95 miles per hour.

The storm then crossed into Wilmington south of Rockford Park, where more trees were uprooted along West 19th Street and Tower Road.

The damage from the straight-line wind event ended near the Delaware Art Museum on Kentmere Parkway.

Some more debris continued east towards the I-95/Concord Pike intersection, where trees were knocked down in Alapocas and Haynes Park.

The three-day period is the closest time frame for separate tornado events in Delaware in at least 70 years, according to the Tornado History Project.

The last time Delaware had three tornadoes in the same week was July 27, 1994, when three separate tornadoes touched down on the same day.

There was last two different tornado events in Delaware in the same year in 2004, when an EF-0 twister hit north of Dover on July 12, and then an EF-2 crossed the New Castle County Airport on September 28.

A major storm, that brought with it a Tornado Warning for northern New Castle County, has le…

UPDATE | 2,300+ still without power after storms as Carney tours damage in Brandywine Hundred

Delmarva: It could take several days to restore power to all customers after Friday storm

If you're a Delmarva Power customer whose power is still out after Friday night's storm, you…