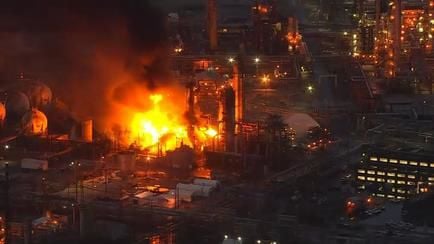 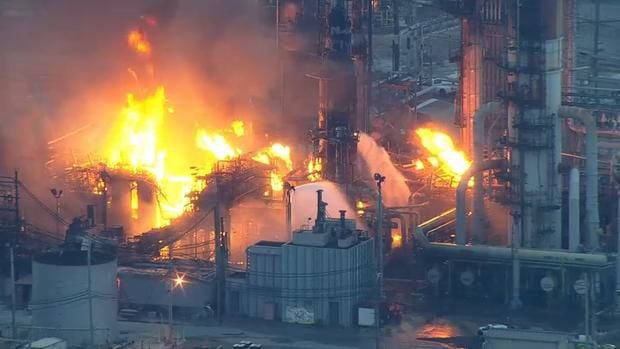 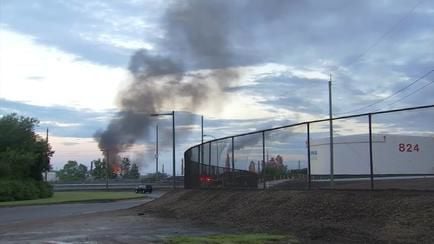 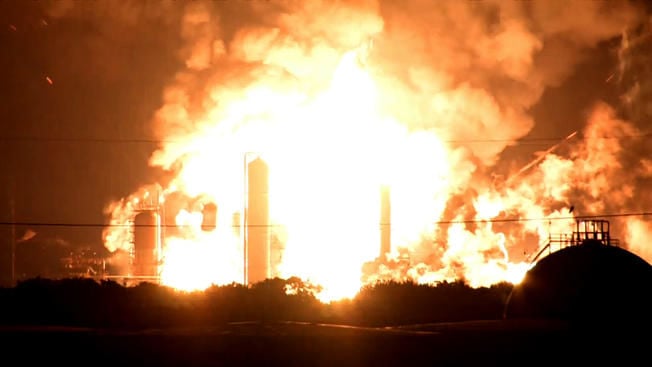 A massive fire that caused a series of explosions at a South Philadelphia oil refinery last week did not threaten the health of nearby residents, the city's deputy health commissioner said Tuesday.

Staff have been testing for several hazardous compounds, including hydrogen peroxide, carbon monoxide and hydrogen fluoride. Johnson said all tests have come back negative.

"There is no threat to the public health in the surrounding community," Johnson said. There is no increase in emergency room visits for respiratory issues since the fire either, she added.

Johnson discussed the air quality testing during a news conference alongside Mayor Jim Kenney, Fire Commissioner Adam Thiel and other city officials. A representative from PES was not present.

Around 4 a.m. Friday, a mixture of butane and propane ignited a fire that caused three explosions. They could be seen and felt across the city and suburbs.

The fire burned for two days until plant staff were able to turn off a valve that sent fuel into an alkylation unit. City fire officials and the refinery's private fire brigade let the fire burn to avoid the uncontrolled release of explosive gas into the atmosphere.

Thiel added that most of the fuel was similar to what everyday consumers would buy to fuel a gas barbecue grill.

Thiel said Tuesday that a joint investigation between his fire marshal's office, city police and the ATF is underway. While a fire is no longer burning at the site, the incident has yet to be placed under control because investigators are unable to tour the entire affected area.

Engineers will be called in to determine the structural integrity of the tangle of metal tanks, smoke stacks and piping running through the facility, Thiel said.

A representative from the Pennsylvania Department of Environmental Protection said that agency plans to inspect the large gas storage tanks nearby to ensure they were not damaged by the fire.

City firefighters and medics remain at the site including the hazmat task force. Thiel said two meetings are being held each day on the investigation's status.

The refinery complex, which is split into two refineries, dates back to the 1800s and is the East Coast's largest — producing gasoline, diesel, jet fuel and other fuel. It is the single largest cause of particulate pollution in Philadelphia.

Philadelphia Energy Solutions emerged from bankruptcy protection in October 2018. At the time, the limited liability company owed the local and state government more than $3 billion. The amounts were negotiated down to tens of thousands of dollars.

Brian Abernathy, the city's managing director, said a working group will convene soon to review the refinery's safety protocols, the city's fire response and listen to resident's concerns about the facility.

He did not immediately have a timeline for when the group would share results with the public.

As the news conference took place at the Fire Department headquarters in Spring Garden, dozens of protesters marched outside the gates to PES' South Philadelphia complex.

Carrying large paper sunflowers and stopping traffic along busy Passyunk Avenue, the group called for the refinery to be shut down.

Philly refinery fire out, probe into cause just beginning

A massive fire and series of explosions rocked a South Philadelphia refinery complex, the la…

A massive fire and series of explosions rocked a South Philadelphia refinery complex, the la…

The South Philadelphia oil refinery that caused a series of massive explosions last week will close within the next month, Philadelphia Mayor …

Some 280 union workers at a South Philadelphia refinery shut down since a June 21 explosion officially received pink slips Tuesday, surprising…