"We've always known, since the beginning of the shutdown, that restaurants are the single most affected business sector in the state and, really, across the country from COVID-19 and the pandemic," said Delaware Restaurant Association President Carrie Leishman.

The DRA published the State of the State - Restaurant Industry Report to provide a detailed breakdown of how restaurants have been impacted by the shutdown, and show consumers the steps and care taken by the industry to ensure consumer safety upon their return.

It was an important step, Leishman said, because restaurants as a whole in Delaware are facing a $700 million loss in revenue from March through July 2020, and a 44% loss in gross receipts reported year-over-year. Of the restaurateurs surveyed for the report, 81% said they believed they'd be operating at a loss for at least the next six months.

"When we took a look at some of the data and the losses, we found it to be staggering," she said. "I think it's important to know how big we are as an industry in the state. We are $3.2 billion industry. We have 2,000 restaurants, we had 50,000 employees. So, you know, not only the economic loss, but what's really been hurting the state is the loss of jobs in our industry...we've lost more restaurant jobs than almost every other state in the country, I think except two of them. When you don't have a healthy restaurant business sector in the state, you really struggle to have a healthy economy overall."

Somewhere between 20% and 30% of the restaurants in the state could close their doors for good as a result of the pandemic and subsequent shutdown, Leishman said, and there's only so much positivity can do to help keep people going.

"I love working with restaurateurs because they are optimists. They're in hospitality; they are tried-and-true, passionate entrepreneurs. You don't get into the restaurant business without understanding risk, and understanding the fact that you're going to work so hard for the American dream," she said. "There's so many of them that are worried about the future and the unknown...It's not a far stretch to understand, for the average person, that restaurants can only operate at a loss for just so long. You cannot operate at a loss very long before you go out of business--and the profit margin in a good year is less than 5%."

In addition to the loss of revenue, establishments are also struggling to keep up with costs associated with improving conditions to meet Delaware public health official safety guidelines to protect visiting consumers.

"Each restaurant has spent tens of thousands of dollars in some cases on items like PPE, or how about the extension of their outside footprint? I mean, it costs so much money--thousands of dollars--for additional tables just to seat people outside,"Leishman said. "They're looking at things like extra cleaning protocols, hand sanitizer, face masks, personnel to keep the place cleaned every 15 minutes to two hours. It is an incredible drain on an industry that doesn't have the money to begin with."

Those protocols are working, though. With 75 Delaware restaurants surveyed by outside food safety-certified experts hired to conduct reviews and compliance checks, 92% of the inspectors said they would likely return to the inspected establishments based on their comfort level with the restaurants' compliance with safety guidelines.

"Can you imagine restaurants trying to open their doors and trying to attract business and keeping up with all the signage, the regulations? So we make sure that they understand what's the most up-to-date [information]. We spend time educating restaurants, really, by the minute, every time there's a change," Leishman said. "Doing the compliance checks, actually, has been welcomed by the industry because they really want to know where they stand; having some kind of an outside entity that has their back, come in and kind of check on what they're doing to make sure they're doing it all right."

But through all of this, restaurants have had the support of the people that love them, and those establishments are just looking to return the favor by remaining safe spaces even as the world tries to make its way through a viral pandemic.

"I want the consumer to know that restaurants are there for them in the community and, to be fair, the community has been there for restaurants. From the early days, there's been somewhat of a movement around restaurants and people were carrying out, they were tipping well, they were doing all they could to save these beautiful small businesses in Delaware because it means so much to communities," she said. "Not just economically, but it means so much for the jobs they bring the community, we are the town halls for every neighborhood--every community, in every city in the state--and I think people don't want to see that go away, the risk is great by not having restaurants...I'm proud of this industry and the community and the state should be as well, but we need to support them as we move forward. It's not going to be easy."

The full Delaware Restaurant Association State of the State - Restaurant Industry Report is available below: 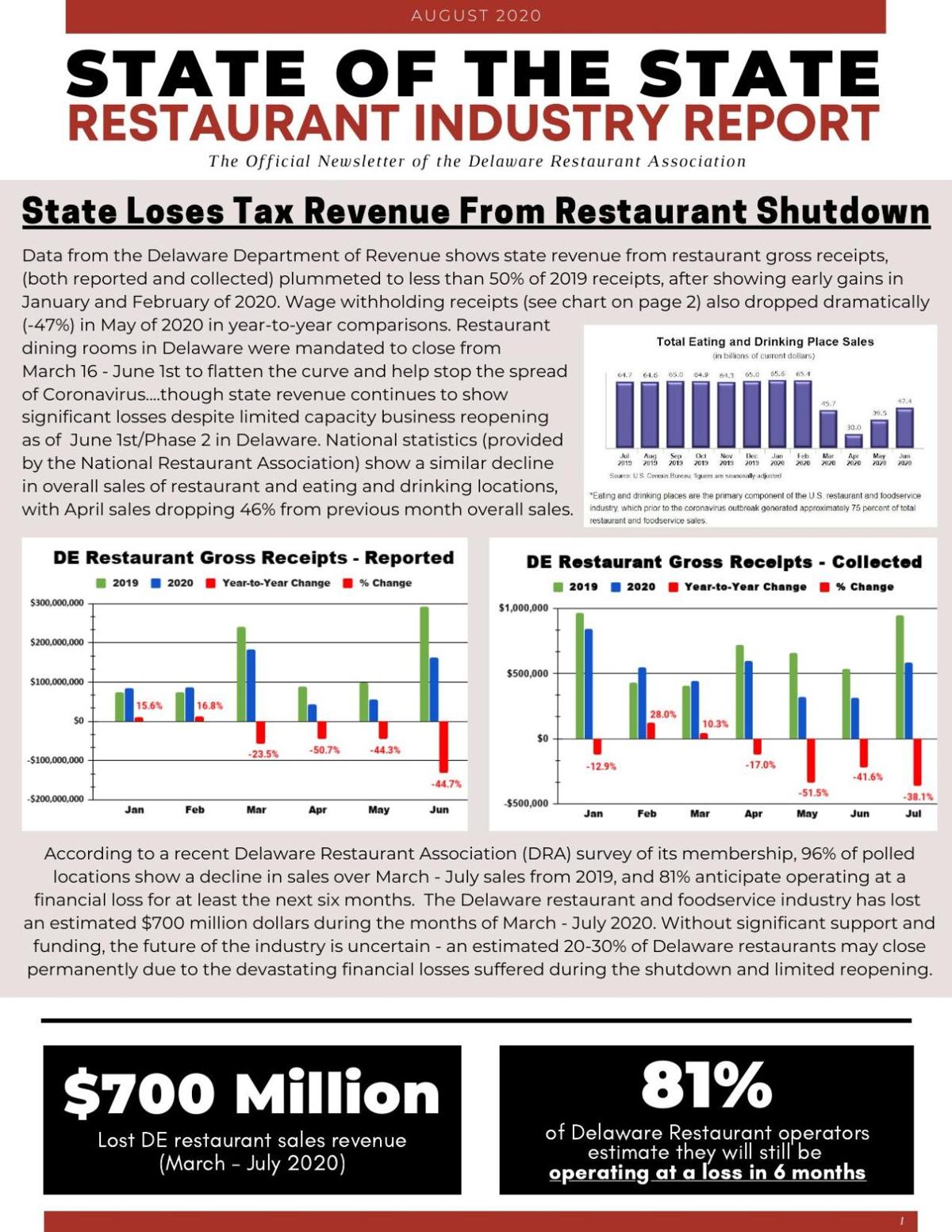 'Saturday night is now Tuesday night' | Dining in, in Delaware and around the nation to look a lot different when restaurants reopen fully

'We feel somewhat betrayed': Restaurants 'devastated' by governor's ban on dining in

It's a grim reality. Some of our favorite Delaware restaurants may not make it out of the co…