The Delaware Interscholastic Athletics Association's decision to move fall sports back to the fall instead of three condensed seasons starting in December was a big step, but not the finish line, for those wanting to get their athletes on the field soon.

Next up in the approval process--the Delaware State Board of Education, which most approve all policies the DIAA enacts, with their monthly meeting set for Thursday at 5 p.m. in a virtual session.

The DIAA voted to allow the fall sports of football, boys soccer, field hockey, volleyball, and cross country to begin practice on Monday, September 28, with competitions beginning on October 12.

The state Board of Education will be receiving the updated regulation schedule, but also some key materials that were brought up at last Thursday's meeting.

Most notably, 240 pages of petitions from parents, students, and community members, who primarily supported resuming fall sports in the fall, have been submitted.

They'll also get to look at a survey of superintendents, which showed that at least five anonymous school leaders said they would not allow their students to compete this fall if the dates were moved back. Whether that would change when they would have to publicly let their feelings known is uncertain.

The State Board of Education voted 5-2 in August to approve the DIAA's move to a December start to the sports campaign.

One of the voters who spoke out in favor of the switch a month ago was School Board President Whitney Sweeney.

"I share concerns about not letting our kids play, and the mental health concerns, but at the end of the day... I think it's important we get off to the right foot with academics, because on the base level, that's why we are in school. I have to give a lot of weight to Superintendents, and their ability to be able, starting on Monday, whether I want to worry about getting a sport right or making sure kids are able to learn, whether at a desk or a computer at home."

Aubrey Noble also voted for the delay, even after hearing from several parents, who are saying they will return to speak at Thursday's session.

"I appreciate a lot of the feedback we got back from the community members, but I also feel that as schools open across the country, we are learning, unfortunately, that younger people are more susceptible to the virus than was first thought. Even professional teams with their abundant resources compared to K-12 schools have found protecting their teams a challenge."

Nina Lou Bunting voted against the date change last month, saying then she wanted to see things get back to normal quicker.

"I feel that the young people and their parents know better what is best. A lot of them have been in their sport or athletics without a problem. I also feel like students are safer out on the field in the open air than they are in the classroom. I believe in the science that there are more problems with being shut down with the scare of this virus than other things like suicide."

Since that meeting, football has now received clearance from the Delaware Division of Public Health to compete.

Even if the State Board approves the DIAA plan, that might not mean total victory for some school communities, as it then becomes a potentially local decision whether to allow schools to play, especially where they are remote-only, such as the four traditional New Castle County districts above the C&D Canal.

WDEL has reached out to DIAA for clarification on what the ramifications would be for school communities who would chose to opt out of sports for the fall during the state of emergency. We have not heard back from DIAA at the time of this article.

View DIAA Survey of Delaware Superintendents and Heads of School: 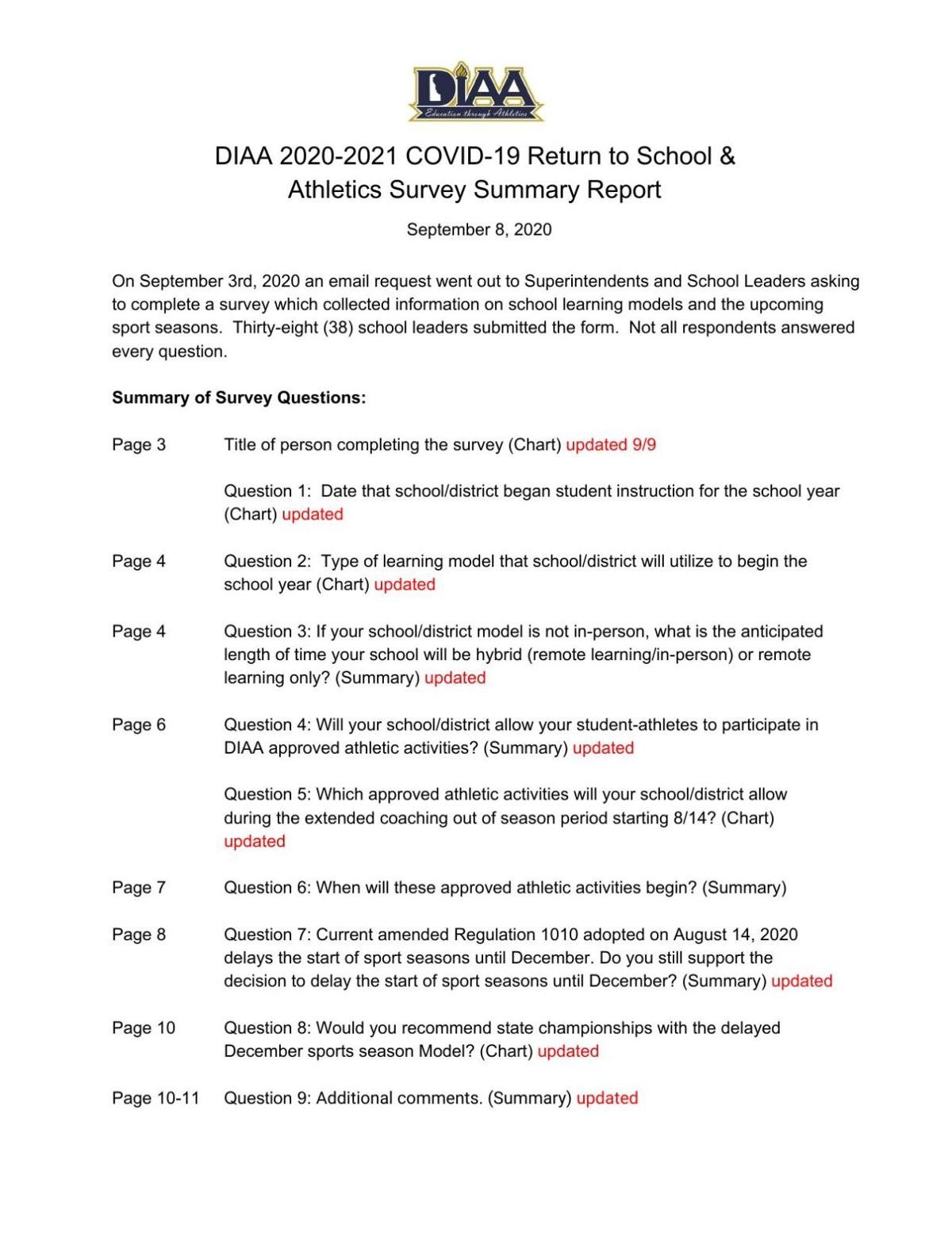