From hoping they'd work together to asking for the lion's share, the tides appear to have shifted in discussions between the state and New Castle County over federal CARES Act funding for coronavirus expenditures.

In a letter, obtained by WDEL, dated May 26, 2020, Office of Management and Budget Director Mike Jackson directly requested $275 million, or 85 percent, of New Castle County's $322.8 million allocation from the federal government, a divergence from what he described as a cost-sharing "partnership" at last week's DEFAC meeting.

Jackson's letter goes on to say the state has incurred more than $65 million in coronavirus-related expenses, thus far. The state is getting $927 million in CARES Act funding, independent from what it's seeking from the county.

"These expenditures are only expected to grow through the remainder of the calendar year as the state and local governments continue to strive to limit the spread of COVID-19. A second wave of infections would further increase these costs," Jackson noted.

"How the hell's New Castle County going to spend half-a-billion-dollars, and can't you take some of that money back?"

"DEFAC wants our money back--this was part of the state money $1.2 billion--we got $322 million, which means they got $900-some million. They want it back; they want to be able to spend it exactly how they want to spend it. We have 55 percent of the population in this county; we did not get 55 percent of the money, so we need to figure out an equitable way to work with the state so that we understand what we're going to be paying for and what they're going to be paying for. Because we need to look at this in percentages per population and us giving 25-30 percent of the money is not equitable, if we have to pay for everything within New Castle County, including the things that if it happened non-COVID, the state would be picking up and we would never ever have to touch a penny of paying for that," said Councilwoman Janet Kilpatrick.

Jackson said the state is also seeking the county's support for additional programs, including the essential child-care program, which he cited would cost up to $140 million to continue through the end of the calendar year.

"Once fully implemented, we expect to perform 80,000 test per month. At this rate, the state will exhaust the initial supply and will need to purchase additional tests during the summer," Jackson wrote.

Contact tracing will cost $10 million--the first we've seen a fiscal note on what that program might cost--though that cost could grow depending on volume and daily contacts.

Jackson said financial support is also needed for enhanced rent and utility assistance program through the Delaware State Housing Authority, which received more than 3,400 applicants from New Castle County, out of more than 5,000 total applications. The Hospitality Emergency Loan Program, is also in need of county-supported funding, according to the state.

At the New Castle County Finance Committee meeting, council discussed the letter and Emergency Ordinance No. 20-008, which seeks to appropriate $85 million of the county's $322.8 million in federal coronavirus relief funds.

"I'll tell you where I'd like to stick that letter from OMB," said Finance Committee Co-Chairman George Smiley.

That emergency ordinance details various expenditures, including $20 million in contingency funding, which Councilman John Cartier said would go towards other line items outlined in the ordinance, including salaries and wages, employee benefits, utilities, materials and supplies, as well as contractual services. 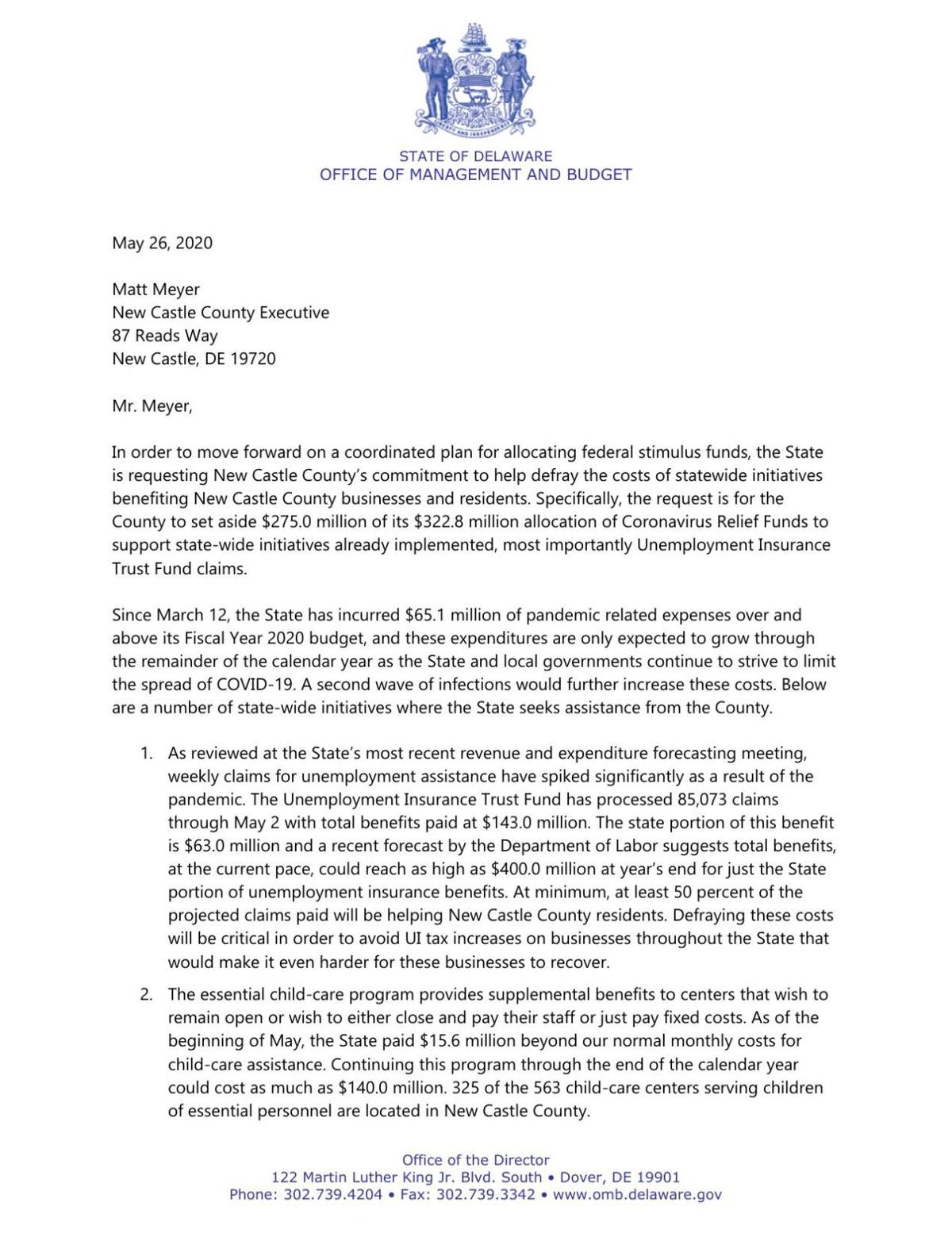 "Twenty million seems a lot even though it says it's going into those items," said Carter.

"The $20 million item that is not detailed out, and I have stressed to finance that those funds are to go to pay for the object levels described above because we are going to have a continued emergency need for testing, test kits, PPE, other things that will be going forward, so we want to make sure that we are dedicating those funds to go into those object levels," said Councilman Cartier, co-chair of the Finance Committee.

Carter said he wants to ensure a level of coordination with the state.

"Unlike a lot of other counties, we don't have a hospital or a public health unit--though we do have paramedics--I'm just trying to get a feel for how much of that $20 million and what the coordination going forward is going to be...I just want to make sure that we don't miss that and that we are truly working together, closely with the state," said Carter.

County Executive Matt Meyer said discussions with the state on the money's usage are ongoing.

Delaware's allocation of federal CARES Act funding totaled $1.25 billion--with all of that m…

New Castle County Council this week approved allocating up to $136 million in federal funds from  the Coronavirus Aid, Relief, and Economic Se…