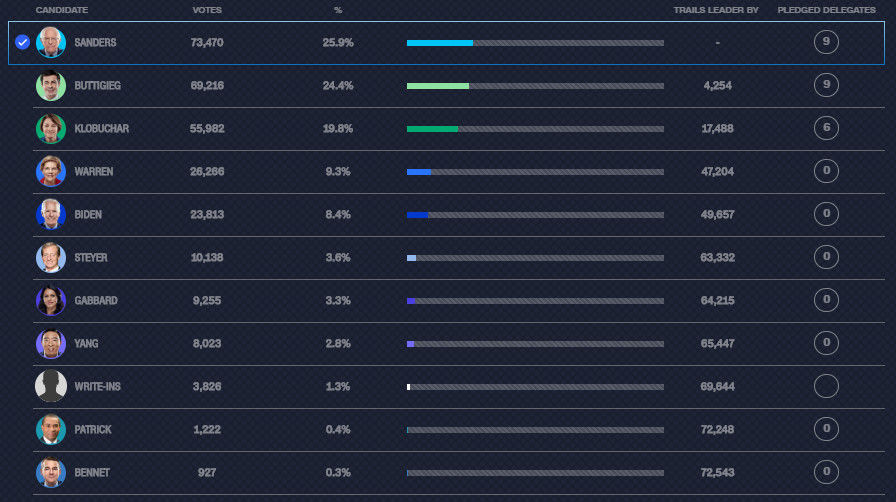 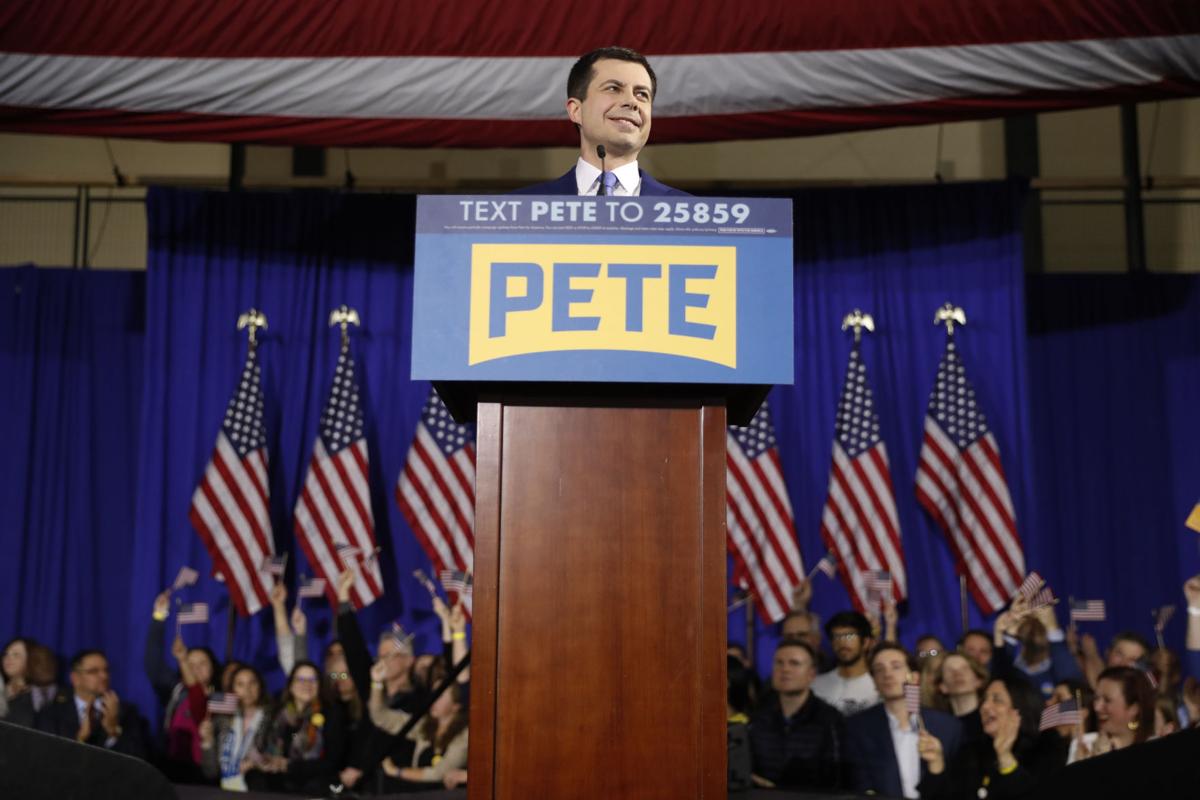 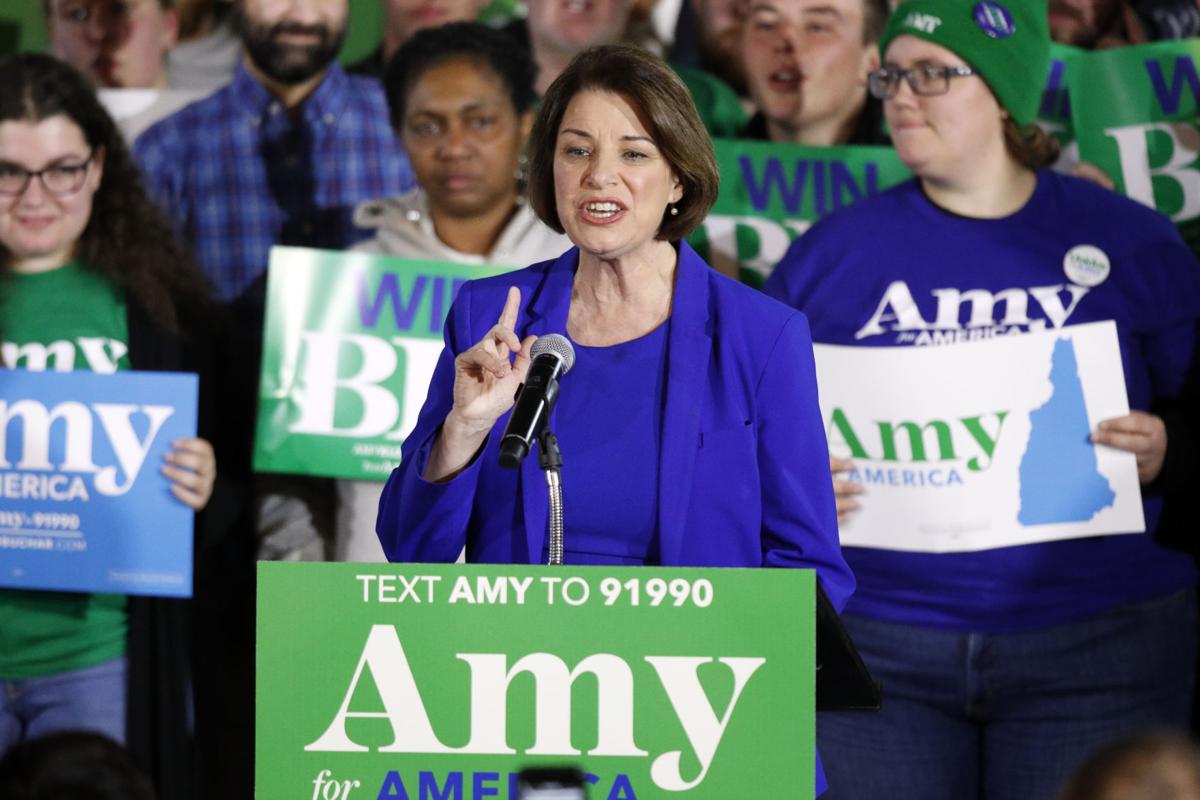 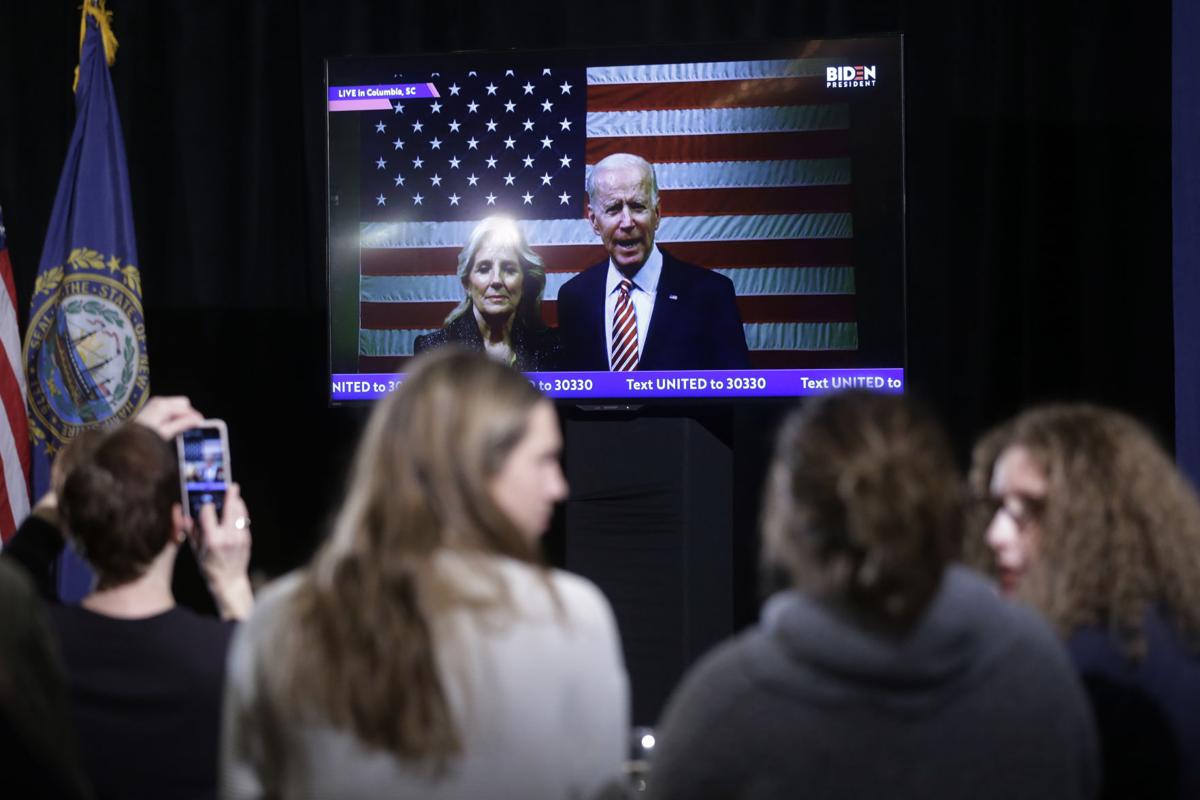 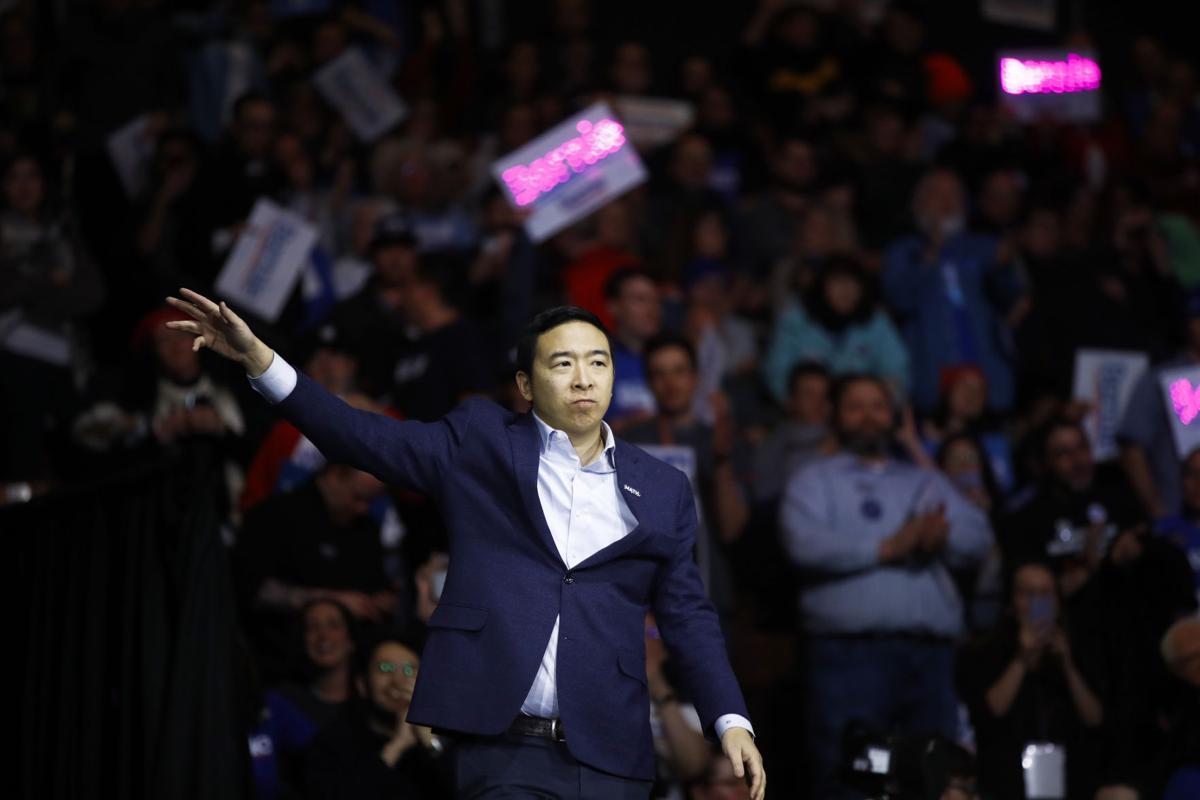 Biden falls: The former vice president will likely end up in fourth or fifth place. That's the worst finish for a former or current vice president who actively campaigned in the New Hampshire primary. Biden was competitive in the Granite State just recently. He led in at least a few polls in January. But just like in Iowa, Biden's support collapsed late.

In New Hampshire, Vermont Sen. Bernie Sanders got the televised celebration that eluded him a week earlier.

But once again, former South Bend, Indiana, Mayor Pete Buttigieg made him sweat.

Sanders' victory solidified his status in the race as a national front-runner, with his poll numbers and fundraising outpacing his rivals. But Buttigieg pulled even with him in the New Hampshire delegate count, CNN estimates, giving the former mayor a slight edge in the overall delegate count so far.

Minnesota Sen. Amy Klobuchar turned in a much stronger than expected third-place finish, opening up a new two-person race with Buttigieg for the moderate lane in the Democratic presidential primary.

Now, the race shifts to Nevada, and then South Carolina -- bringing the party's diverse base of Latino and African American voters into the fold.

Massachusetts Sen. Elizabeth Warren and former Vice President Joe Biden are left to retool and figure out how they can mount comebacks in those states before their fundraising dries up and the delegate race moves out of reach.

Sanders got what he needed

Sanders did what he needed to in New Hampshire: win.

There's no narrative war this time around. The vote was simple and, though close, decisive. The Sanders campaign got the celebration -- and likely the fundraising boost that comes with a primetime victory speech -- that it missed out on in Iowa.

Now they're off to Nevada, which might be his strongest state of the first four, after making a few stops in Super Tuesday states on the way.

If there's any reason for concern among Sanders supporters, it will be his margin of victory here. Sanders was never going to win by 22 percentage points, like he did in 2016, in such a deep field. But Buttigieg and Klobuchar's strong showings made it clear, if there was any doubt, that the moderate wing of the party isn't ready to wave the white flag and rally behind the Vermont senator.

On the flip side, Sanders stands to benefit from the continued viability of those moderates, who seem further away from coalescing than they did last week. Add to that the specter of former New York Mayor Michael Bloomberg, who has been quietly spending hundreds of millions of dollars in the Super Tuesday states, and an even deeper splintering of Sanders' opposition might be on its way.

Buttigieg and his top advisers wanted to keep it close with Sanders in New Hampshire and it appears they have done just that.

"Here in a state that goes by the motto, 'Live Free or Die', you made up your own minds, you inserted that famous independent streak, and thanks to you, a campaign that some said shouldn't be here at all, has shown that we are here to stay," Buttigieg said at this Tuesday night party.

The strong showing comes after the Iowa Democratic Party, despite the chaos that engulfed their caucus process, said that the former South Bend, Indiana, mayor received the most national delegates from the state.

The New Hampshire finish validates both Buttigieg's ability to take attacks from his rivals, something that happened repeatedly at the last debate, and that his consistent contrast to Sanders' promises of a "revolution" have resonated with more moderate Democratic voters.

"Vulnerable Americans do not have the luxury of pursuing ideological purity over an inclusive victory," Buttigieg said in a new line added to his stump speech.

Like Klobuchar, though, the most difficult part of Buttigieg's path towards the nomination is ahead of him.

For months the mayor has said the best way for him to win over Latino and black voters -- two demographics he has struggled mightily to sway -- was by showing he was a winner in Iowa and New Hampshire.

As the contest heads to diverse Nevada and South Carolina, the mayor gets a chance to test that case, or as he put it to CNN's "New Day" on Wednesday morning, "we've got more work to do to demonstrate the breadth of our support."

Klobuchar gets her moment

Klobuchar had turned in a number of strong debate performances. But none like the one she delivered last Friday.

And by finishing in the top three in New Hampshire, Klobuchar can now confidently look at that debate as the high point of her candidacy.

"Tonight in New Hampshire, as everyone had counted us out even a week ago -- thank you, pundits -- I came back and we delivered," Klobuchar bragged on stage on Tuesday, noting that some pundits had predicted she would not make out of Iowa or to the New Hampshire debate.

"And man, were we at the debate in New Hampshire," Klobuchar said with a smirk.

The strong finish in New Hampshire is the moment that had eluded Klobuchar for a year. She had turned in strong debate performances in the past, but few ever registered with the electorate. The difference at last week's contest was that it was the first where voters were poised to go to the polls days later.

The question now for Klobuchar is how she sustains this momentum.

Her campaign will likely be infused with needed campaign cash, but the candidate lacks substantial organizations in Nevada or South Carolina and is just starting to shift their focus to key contests that will vote on March 3. And Klobuchar has shown no ability to win over Latino or black voters, voting blocs that will be key in the next two nominating contests.

For now, though, Klobuchar remains on a post-New Hampshire high.

"We are on to Nevada," she said on Tuesday, "because the best is yet to come!"

Bad nights for Warren and Biden

Biden and Warren both turned in stunningly poor performances, falling short of the 15% threshold to win any delegates in New Hampshire and placing fourth and fifth.

And both offered previews in their speeches Tuesday night of how they'll try to forge ahead.

Warren took new, clear shots at Biden over an attack ad targeting Buttigieg and Sanders over some of his supporters' tactics, complaining that the "fight between factions in our party has taken a sharp turn in recent weeks."

She continued, "But if we're going to beat Donald Trump in November, we are going to need huge turnout within our party, and to get that turnout, we will need a nominee that the broadest coalition of our party feels they can get behind. We can't afford to fall into factions. We can't afford to squander our collective power. We will win when we come together."

Biden, meanwhile, was already in South Carolina, insisting that African American voters who have supported him are being ignored by a nominating contest that starts in two nearly all-white states.

Biden's campaign might not have known a single-digit, back-in-the-pack finish was coming -- but it knew the former vice president was on track for another damaging night. So he bailed, hopping on a private jet Tuesday evening to South Carolina.

Unlike the crowd of about 100 he'd left to hear him via video conference in Nashua, Biden's event in Columbia featured no TV screens. No live results to deflate the crowd.

Now, Biden -- for whom electability was a calling card, until he started losing elections -- has to figure out how to stop his stronger numbers among non-white voters from cratering in the wake of his poor start.

Biden, who a month ago told a crowd in Iowa they had the "keys to the kingdom," made a new prediction on his video conference into his Nashua party: "We're gonna win in Nevada and South Carolina."

The chaotic results in Iowa didn't thin the presidential field -- but New Hampshire knocked candidates out of the race.

Andrew Yang, the entrepreneur whose online "Yang Gang" emerged as an impressive and devoted following and fundraising force, exited as soon as New Hampshire's results were announced. His campaign's animating cause was his push for a universal basic income -- or $1,000-per-month "freedom dividend," in Yang's telling.

Colorado Sen. Michael Bennet also dropped out. He'd been all-in on New Hampshire, and told a small group of supporters that "it is fitting for us to end the campaign tonight."

"Diane and I are going to go home and rest and reflect on this outcome and make some decisions tomorrow morning about what the future of this campaign can and should be," he said. "No matter what, the future of cause endures."