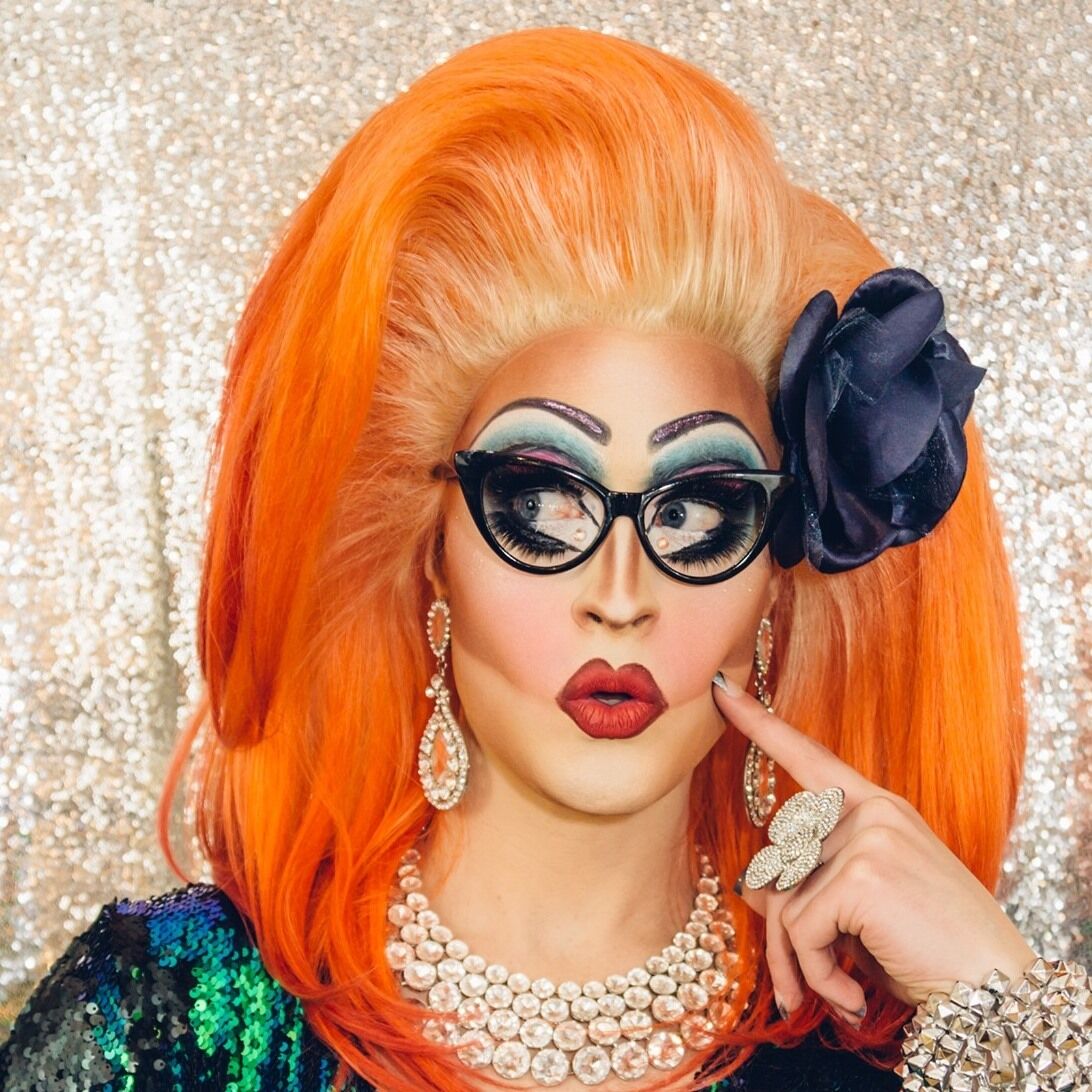 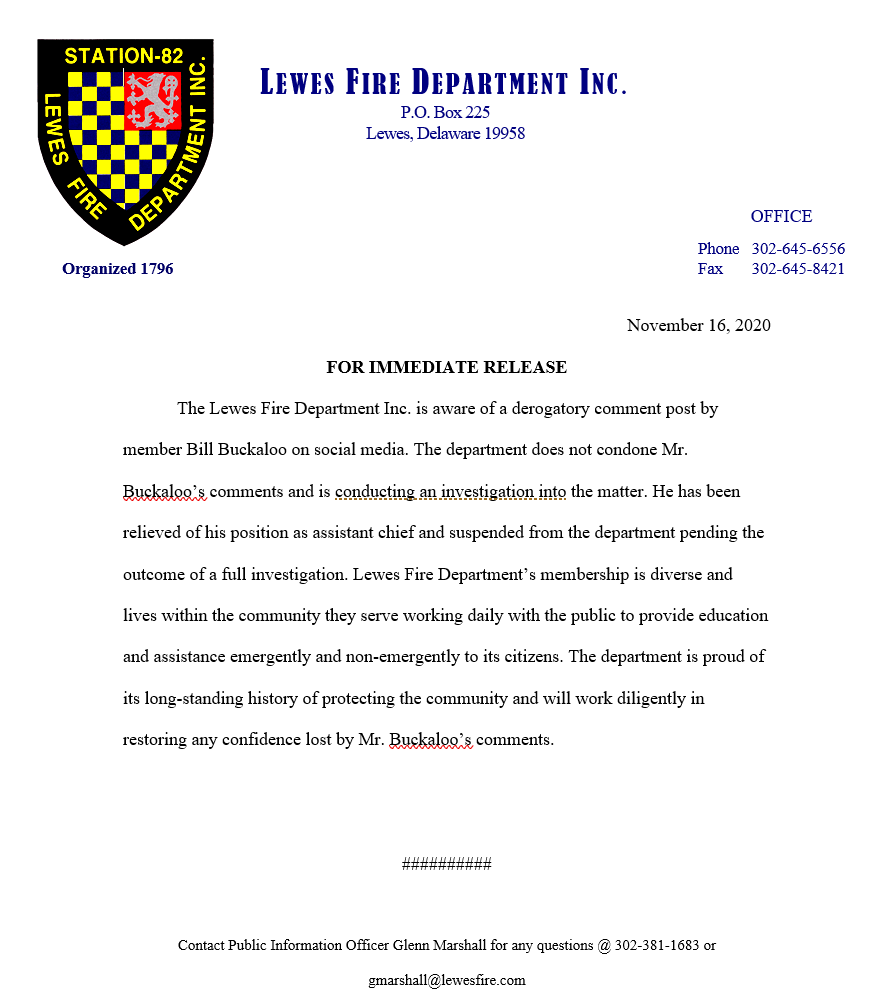 Jeremy Bernstein, as Magnolia Applebottom, is a well-known drag queen in a regular cabaret show in Rehoboth Beach, but neither Bernstein nor the LGBTQ+ community is going to stand for dragging his performance with a homophobic slur.

"I'm on stage five days a week at the Blue Moon," Bernstein said. "I had a great show on Sunday [November 15, 2020]. I have my award-winning cabaret show on Sunday nights...and after the show I was scrolling through Facebook, as you do, in the dressing room, and I saw the post."

A friend of Bernstein's had taken a screenshot of a public post from the page of Lewes Volunteer Fire Department Assistant Chief Bill Buckaloo. The post read:

The post was accompanied by two photos, one of Buckaloo and a woman, the other of Bernstein on stage as his alterego.

"It literally took the wind out of me," Bernstein told Peter MacArthur on WDEL's DelAWARE Tuesday. "I was like. 'This is not okay.' and I showed it to a couple friends of mine and they said, 'People need to know about this.' And from there, it took off like a rocket."

COVID-19 and the beach's off-season mean lighter crowds, Bernstein said, so it was easy to recall his attendance at the show, and Bernstein was shocked because, at the time, he'd describe Buckaloo as a pleasant audience member.

"He was in the front row the entire show. He was there before the show, he was there after the show," he said. "And the weird thing is, he was a fine audience member. Like, he wasn't heckling, he wasn't doing anything. He even tipped me during one of my performances. So that's what is very jarring--that he's hiding in plain sight at this point, at my show. But his behavior afterwards is, I think, very unacceptable."

The post resulted in some initial concerns from the LGBTQ+ community regarding Buckaloo's position within the first responder community, and if his language meant his behavior within that capacity would dictate how he performed his duties.

"I've been so overwhelmed the past 24 hours from the amount of support and people reaching out, and I am just so happy with the community we have here in Rehoboth and Lewes, that the LGBTQ+ community are really making their voices heard here," he said. "They're basically saying, 'Hey, you are a first responder. We have you hold you to a higher standard.' I think the LGBTQ+ people want to know, like, 'Hey, if my house is on fire and I have a gay pride flag outside, are you not going to put out the fire in my house because we're gay, or lesbian, or bi?' We need to have that sense of, 'I know you're going to protect me, no matter who I am.'"

Buckaloo, previously arrested and charged with disorderly conduct for a 2018 incident, has been suspended following the post, pending a full investigation by the fire company. The company issued the following statement to the community:

Buckaloo also issued an apology on Facebook on November 16, 2020:

"I made a very inappropriate comment last night on a post. I want to sincerely apologize for my distasteful choice of words. I definitely displayed a lack of good character and judgement. I offended a lot of people including myself. I have no excuse what's so ever [sic]. I am truly sorry for all the harm I have caused."

Applauding the department's quickness to react, Bernstein said he was thankful they took his concerns seriously.

"I want to thank the Lewes Fire Department for their very, very swift action on this," he said. "They were on this immediately, and I think it's because of the amount of emails and phone calls that they got early Monday morning, and it really means a lot. I think the local community here has taken note about how fast they worked on this, and how serious they took it."

Despite all that's occurred, Bernstein said he holds no ill will, and that conversation is one of the only things that drives understanding and change, so he invited Buckaloo and any member of the department to come to his show, and even participate if they'd like.

"My show, for example on Sundays, is a cabaret and talk show. I have the platform. I literally, my set has two chairs," he said. "I welcome anybody from the Lewes Fire Department, and even Bill Buckaloo, to come and have a conversation. Now, it's normally a comedy show, and singing and doing funny cabaret songs, but I welcome you to come in, sit down, and talk. I think the community and the locals that know about this, though, I think they would like to hear from him, and I'm very open to a conversation just to make sure that he understands that the type of behavior is not going to be tolerated."