A civil lawsuit that was ultimately settled out of court alleged one local Wilmington institution found a way to continue supporting itself through the pandemic by requiring its employees to collect unemployment while forcing them to continue working without pay to maintain their positions.

According to a complaint filed by William Lewis, of Elsmere, and Michael Crispin, of Wilmington, against The University and Whist Club and specifically its owner John Hynansky alleged the latter pair violated the Fair Labor Standards Act via a number of actions taken by the organization.

After being promoted from the Food and Beverage Manager position to Assistant General Manager position in August 2020, Lewis claimed he received no increased in salary despite the promotion.

On March 13, 2020, the suit alleges Hynansky notified employees the club would close due to the COVID-19 pandemic, and on March 16, 2020, informed Crispin and Lewis to file for unemployment. At that same time, however, the lawsuit alleged Crispin, who was Vice President and General Manager at the time, was told to inform the remaining employees to do the same.

However, the suit said Hynansky told Lewis and Crispin they would be required to continue working at the club to maintain its daily operations, but that he informed them they'd receive no compensation for the hours worked. 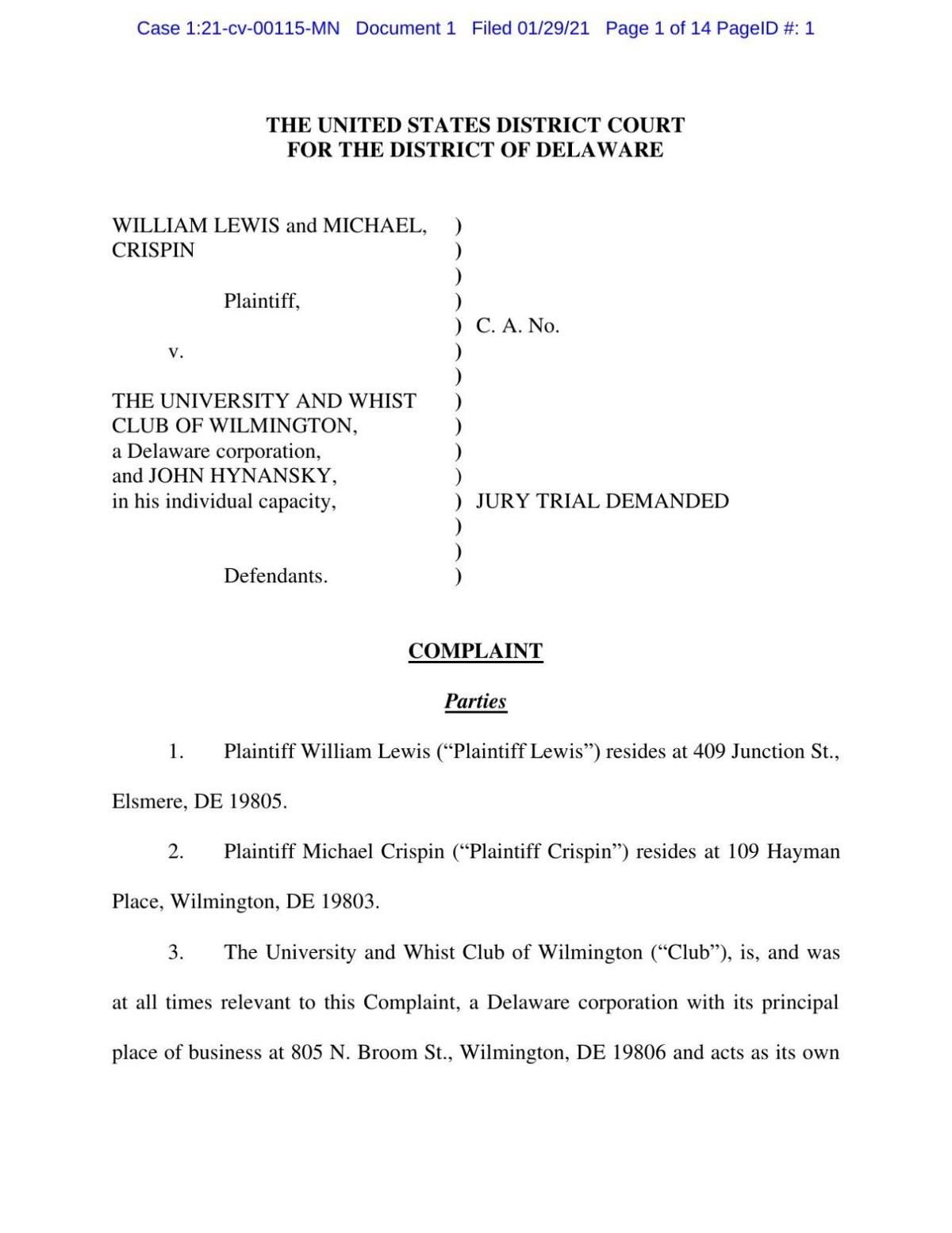 The pair said they worked between two and eight hours, six days a week, while receiving no compensation.

When the club began offering carryout and package sales on May 1, 2020, the plaintiffs and other employees continued to receive no compensation, according to the suit, and then on May 26, 2020, Hynansky decided the club would open Wednesdays for lunch and dinner.

In early May, club members discovered Lewis and Crispin weren't being paid and started a charitable fund to donate money for managerial staff, but the suit alleges the club withheld the funds--which totaled $38,950--from the plaintiffs for several months.

On August 1, Crispin notified the club he'd be leaving, and on the 28th, he notified Lewis the donations would be dispersed between several managers and chef positions, and that Hynansky--once he returned from the Ukraine, where he'd been quarantining from March through August 2020--would pay Lewis 75% of the manager salary to "make it right for the managers’ due diligence for the last 6 months," according to the lawsuit.

On August 24, the suit says employees returned to payroll status, but on the 26th, Lewis--who'd acted as Food and Beverage Manager, AM Dining Room Manager, Beverage Manager, Wedding Meeting and Social Events Coordinator, and unofficial Facilities Manager throughout the pandemic--was passed on for a promotion to General Manager for another employee, who had previously been the Marketing Manager.

According to the suit, Lewis, a black man, asked Hynansky why he'd been passed over for the position for a white woman, and was informed, "She can’t work for you, but you can work under her."

In early September, the suit alleges the new GM informed Lewis she did not trust Lewis, and, with Crispin gone, things needed to change, then informed him the Employee Disbursement Fund would now be disbursed under her direction, and through the payroll the club's payroll, thus requiring applicable taxes.

The suit sought unpaid wages due plus interest, damages--compensatory, punitive, and otherwise--and attorney's fees and costs.

Recently, the suit was settled out of court, with the club's attorney, Jeffrey Weiner, providing, "no comment" on the resolution, while Lewis's and Crispin's attorney, Ron Poliquin, offered only, "All I can really say is that the case has been amicably resolved."