University of Delaware President Dr. Dennis Assanis wants to see how the novel coronavirus COVID-19 pandemic and surrounding situations evolve before pulling the trigger on any given scenario for the coming school year.

Some of those iterations include changes to dates, some include modifications to class and gathering size restrictions. There are no easy answers, and a lot of moving parts. Assanis said during a faculty meeting/town hall that the Fall Planning Task Force hopes the school can target a somewhat normal start date. 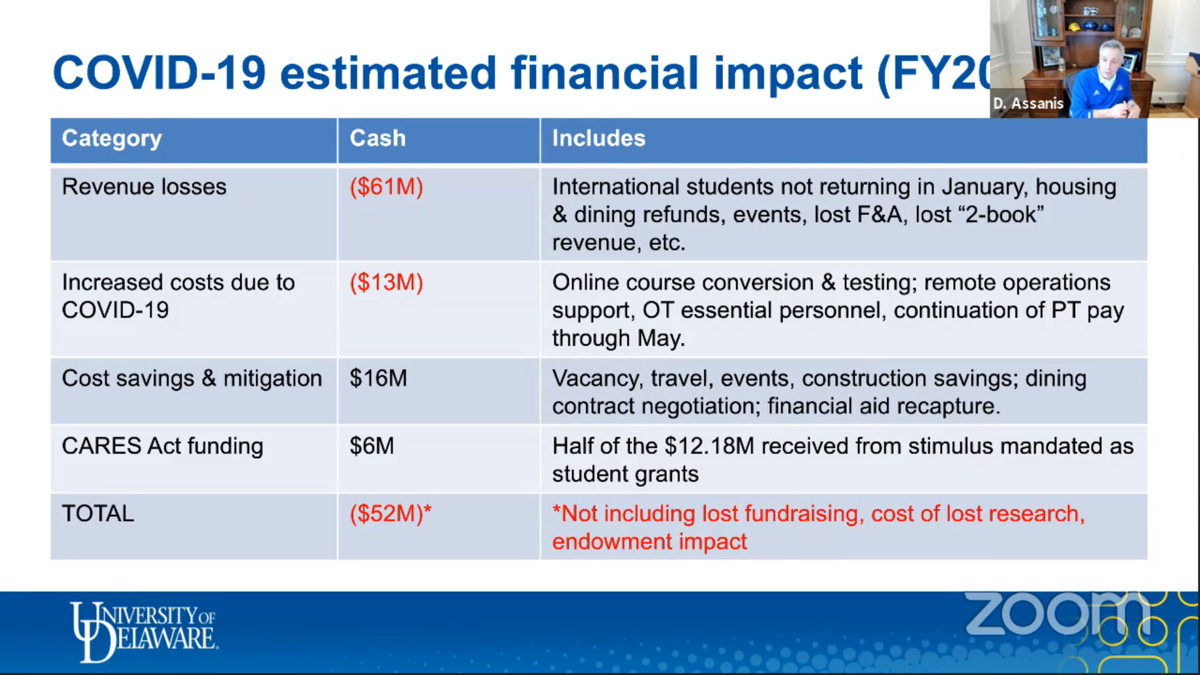 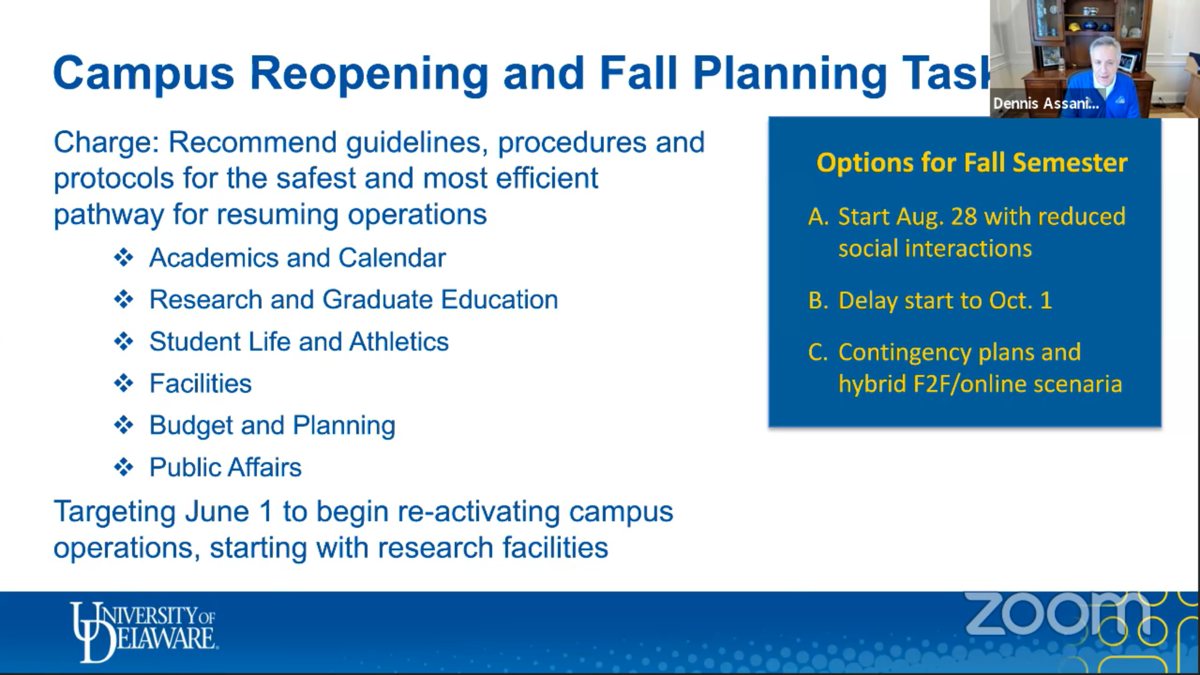 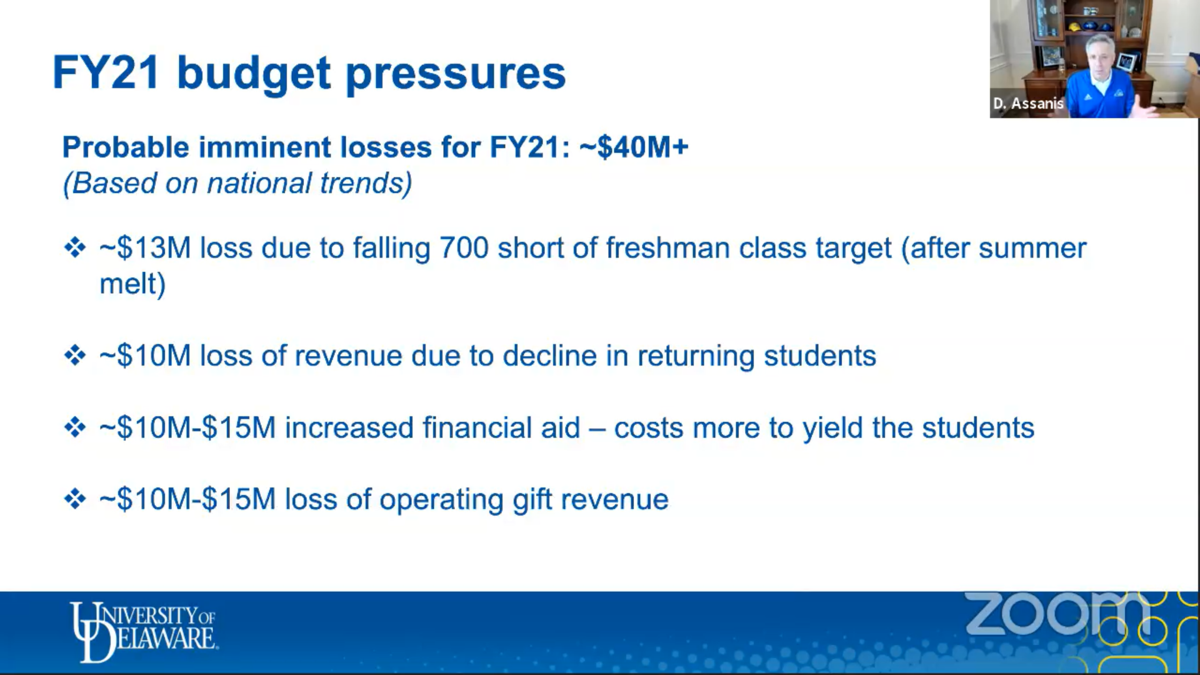 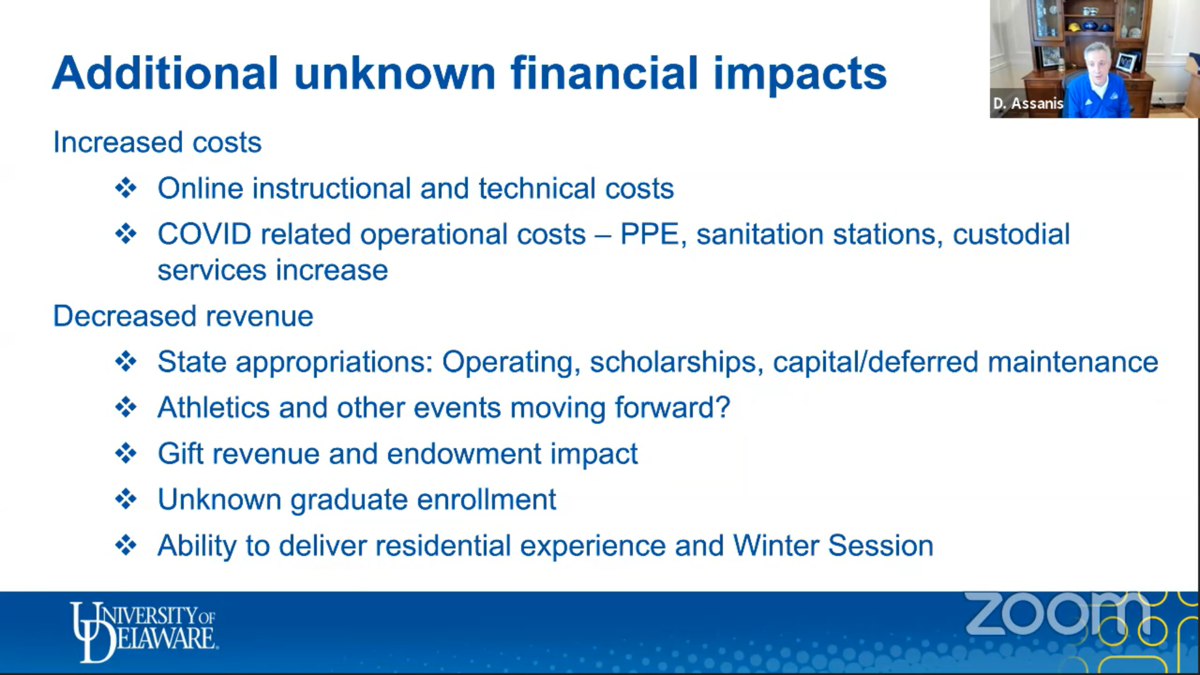 "As we think about options for the fall, the question I'm asked about 50 times a day, if not more, is, 'Are we going to have normally timed opening for the fall semester?' Needless to say, we are planning on it. We are planning as one of our scenarios that August 28 is going to be the campus fall date start, according to the new normal," he said. "One of my colleagues is looking at 88 alterations to the basic theme, I want to keep it to three. So, basically one is starting August 28th with reduced social interactions, and the other one is to delay the start, still in the fall, maybe to October 1...And then, of course, in any case, we need to be thinking about contingency plans in case the progress of the evolution of the disease is not what we want...If there's a resurgence of the virus, we always the ability to revert to the online modes that we have now, or to hybridize between face-to-face instruction for smaller groups and online for the larger groups."

Assanis said the community can expect a decision on the start of the semester in mid-July, but he warned:

"If something happens--for good or for bad--people need to be flexible. In the past, they would say 'what an inconvenience...you made a decision now we're changing again the decision.' If it's for your safety, in the interest of your safety, you should be prepared to flexible and adaptable."

The school will adhere to the best guidance available from experts and public health officials, Assanis said. They'll continue to monitor the situation locally, nationally, and globally--how COVID-19 is progressing and how available resources are holding up--before they determine whether it's safe for the school to open.

"How many people are affected? Is the number going up or down? Obviously that's a factor of testing--but, you know, at some point we need to show that we've leveled off and we're starting to trend downward. So what's the capacity in our hospitals? Are supplies prevalent for forecasting? What types of tests? We know some tests have problems," he said. "It's very complex. And once the test demonstrate that you have a positive case, we have to isolate, quarantine, and contact trace...I'm spending a lot of my energy, along with my team, to think about this because, first and foremost, as I said, the safety and health of the community is my priority."

Personal protective equipment would be the way to ensure a lot of that health and safety, and Assanis said he's going to need to see strong availability of PPE and testing before he can make that call. The school, hypothetically, would want to be able to conduct thousands of their own COVID-19 tests a day, if warranted, and--if the university chooses to open--have quarantine dorms available on-site so students can recover in their learning environment.

"We're looking at every possibility, no stone is unturned," he said. "Obviously we know that the one-and-out is not enough. You've seen what's happening in the White House they've been testing for one day and then, three days later, there might be some people who are positive...So we're looking at the thermometer test and thermal imaging and other possibilities for people entering spaces so we know they're safe and, if not, they need to be quarantined. We're looking at the possibility of setting aside one or two dorms so that we have a quarantining space."

Classroom density will likely be limited and large, lecture-style classes previously hosted in expansive halls will likely go virtual. Assanis expects to see class sizes limited to approximately 25 persons with more time in-between classes to prevent crowding on the Green and allow time for cleaning, making for longer days and school weeks that could include weekends.

"That means their workload and their workday would probably start at 8 in the morning, or 7, and go until about 8 or 9 in the evening, and maybe, seven days a week, to provide for that spacing," he said.

With no decision made even for the fall yet, Assanis also got questions about the winter session--what he called a high point of the school year, for many students, who study abroad during this time.

"We are not currently putting deposits down for the sites, but we're also not telling them that we've canceled; we're asking for time," he said.

But he noted the winter session could be needed to make up for lost time during the fall semester, if things kicked off later than August 28.

"We do want to offer the same academic experience, we need the length of time of the semester, so what that means is we'd have to extend our semester past the holidays into January, to wrap up lectures and take the exams. That means that unfortunately, we would have to cancel the winter session."

He noted a loss of winter session would amount to $20 million in revenue.

Additionally, Assanis didn't take fall sports off the table, but said what those might look like remains a work in progress to determine how to even get the players safely on the field, let alone spectators in the stands.

"So much needs to be changed; we're still trying to figure out how to play football and other sports, which are contact sports. I mean, to some extent football players have face masks, you know, partial masks but we need to be thinking through all those...everybody's agonizing about those. People recognize that academia and sports are the hardest of the challenges ahead of us in society."

It would be a difficult decision to delay sports, as the lost revenue is already staggering as the school looks ahead to the next year,and a pay freeze has been instituted for staff. Assanis took a 10 percent pay cut, amounting to $87,000 of his $878,000 salary.

"I've already sent a very explicit memo to the community [detailing] the dire consequences of COVID on our financials," he said. "We're incurring revenue losses to the tune of $61 million for all kinds of things, from the International students not able to return to campus, even in January--because we're not getting the visas to come especially back from Asia--to housing and dining...the loss of events, and so many other things. COVID has brought to us about $30 million, so far, in new costs with online course completion and...support and many other areas. As you know, we remain committed to pay everybody including our part-time workers, to end of May, to reduce anxiety and offer some financial security on top of health security."

There's also a matter of donors not producing as much to benefit the school as there is during less-trying times--around $50 million, according to Assanis' estimates--and though the school has found roughly $60 million in cost-savings so far, the school is still in a tough spot.

"So that gives you an idea of the impact, anyway you want to quantify it in your mind," he said. "The part that is not captured here is that we did have a plan--on April, 23, to be precise--to announce an extension of our [fundraising] campaign. This is deferred now to a non-date...Our endowment, which is there in perpetuity to ensure continuity of academics and discourse for students and affordability, has diminished here. We're putting fewer resources right now in there to invest for future growth. Any way you look at it, one-third to one-fourth of the year has been affected in terms of some loss of productivity...we'll continue to face a lot of budget pressures for fiscal 2021 walking into the door."

And between the losses of income from students not returning to stay on campus or paying for food services, and unknown market fluctuations outside of the school in markets generally, the school will still need to continue to invest in its online classroom infrastructure and PPE items for the campus.

"Everything costs money," Assanis said. "All of this could easily point to the fact that next year, we could be dealing with a $100 million budget impact."

In the meantime, as Delaware State University gears up to have its first-ever virtual commencement this weekend, Assanis said, despite mounting challenges, they're exhausting every way possible to have an in-person commencement for the graduating class of 2020.  He said a survey of students--eliciting thousands of responses--stressed the desire for an in-person celebration. That celebration would normally be taking place just a few weeks from now.

"The heroes who will make it through, in spite of adversity,m through the finish line this year...we all know how much the commencement ceremony means to everybody in our community," he said. "Everybody tends to prefer an in-person event, some time later in 2020, or even in 2021, when the pandemic allows us to have that versus just a virtualization of commencement, so we absolutely understand.

"We also understand how important it is for graduates to walk through the stage in a convocation set-up...for colleges, schools and programs...we'll do that when it is safe to do so."

University in the time of COVID-19 | Students must weigh benefits, risks, changes while pursuing higher education

"I really think people are just waiting to see."