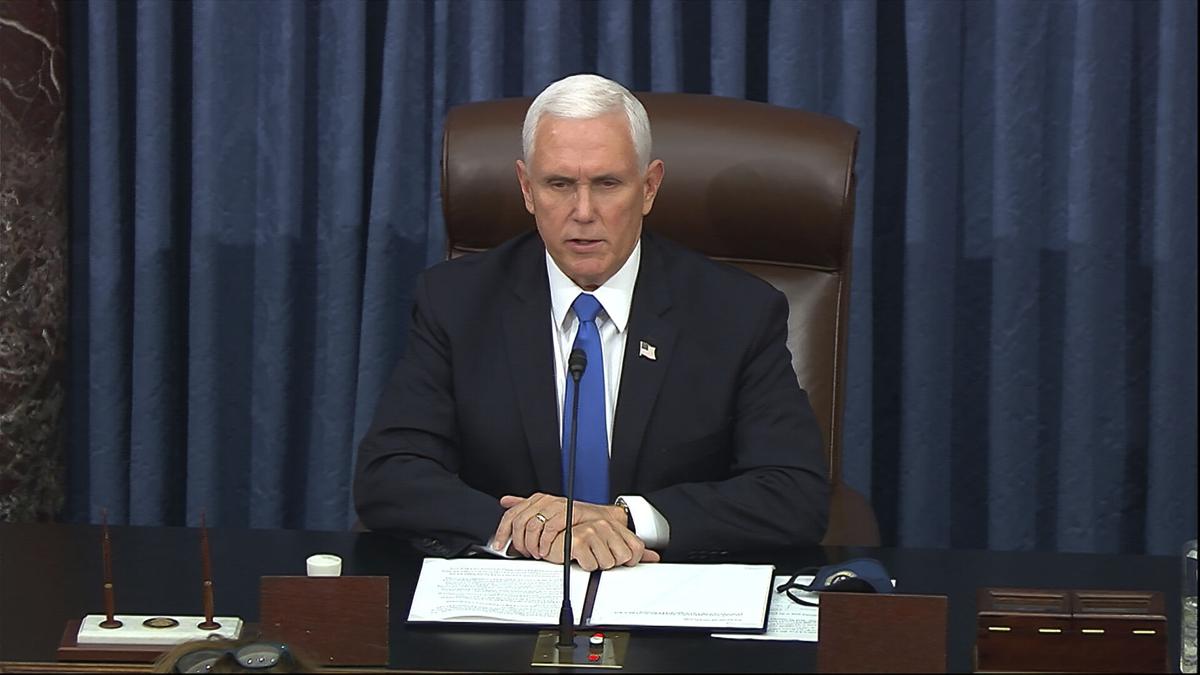 In this image from video, Vice President Mike Pence speaks as the Senate reconvenes after protesters stormed into the U.S. Capitol on Wednesday, Jan. 6, 2021. 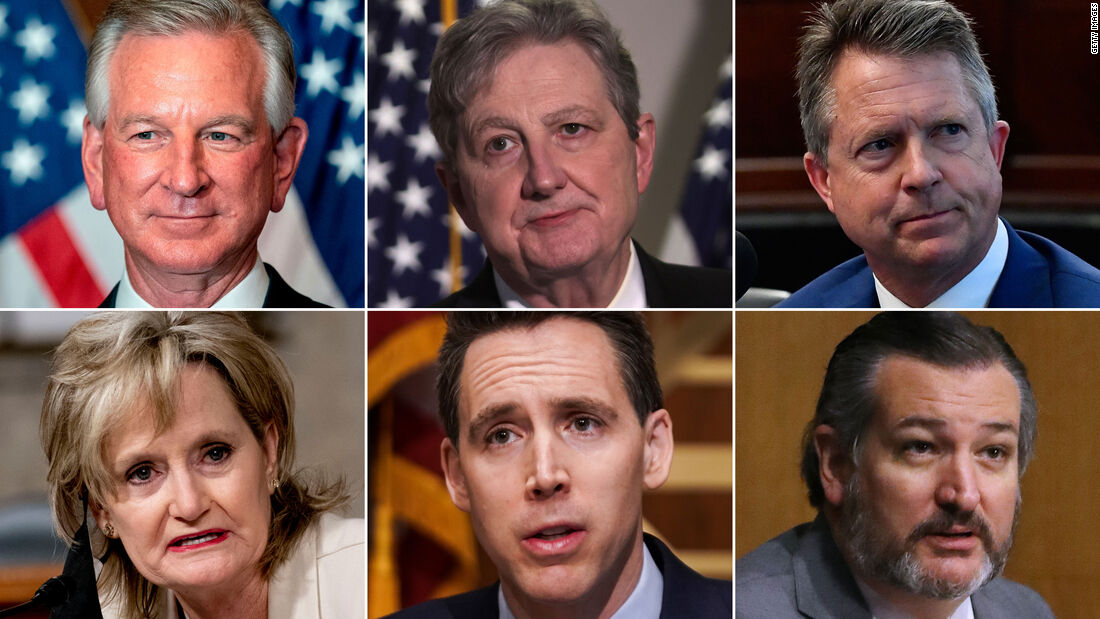 "We defended our Capitol today. We'll always be grateful. The men and women who stayed at their post to defend this historic place," Pence said. "Those who wreaked havoc in our Capitol today, you did not win. Violence never wins. Freedom wins. This is still the people's house. As we reconvene in this chamber, the world will again witness the resilience and strength of our democracy."

The first order for both chambers was to finish voting separately on whether to uphold objections to Arizona's electoral vote certification. It failed in both chambers. While there was stronger support from House Republicans with 122 favorable votes to uphold the challenge, only six senators voted to uphold the objection.

After reconvening for a joint session, Georgia representatives attempted to object to the certification of electoral votes, but as an objection needs to be written and signed by both a representative and a senator--and senators previously supportive of the objection withdrew their support following the violence at the Capitol earlier in the day--the objection failed.

An objection from a Michigan representative suffered a similar fate, being dismissed without senatorial approval. On Nevada's electoral vote certification, 56 representatives rose to object, but also failed to find support from a single senator.

An objection was additionally raised during Pennsylvania's electoral vote certification. It found support from 80 members of the House of Representatives and a senator, forcing the House and Senate chambers apart again for debate at around 12:15 a.m.

The seven senators who voted to sustain the objection to Pennsylvania's certification were:

As of 1 a.m., the House continued to debate the issue. They received announcement from the Senate at 1:30 a.m. that the group was ready to rejoin for a joint session. Tempers flared around 1:45 a.m. when Pennsylvania's U.S. Representative Conor Lamb said the "lies" being spouted by objectors in the shadow of a day like Wednesday don't deserve an ounce of respect. Not an ounce." Several members of the house flooded into the aisles as things became heated, but order was soon restored.

After returning from separate debate sessions around 3:30 a.m., the joint session breezed through the remainder of the electoral vote certifications, and Joe Biden and Kamala Harris were declared President-Elect and Vice President-Elect by about 3:30 a.m.

The pair passed the 270-vote total needed to be declared the winner, and an event which typically takes about 45 minutes wrapped at about 3:40 a.m., more than roughly 14 hours after it began. Of the 538 electoral votes available, Biden and Harris finished with 306, Trump with 232.

Prior to the finalization House Speaker Nancy Pelosi struck a defiant tone returning to the House chamber, saying rioters had failed in their mission and assuring they would face justice.

"To those who strove to tear us from our responsibility, you have failed," she said. "To those who engaged in the gleeful desecration of this, our temple of...American democracy, justice will be done."

"Justice will be done"

The Democratic leader then assured Americans that the House would continue to be about the people's business, starting tonight with certifying the election of President-elect Joe Biden.

"Despite the shameful actions of today, we still will do so," said Pelosi. "We will be part of a history that shows the world what America is made of...Congress has returned to the Capitol. We always knew that this responsibility would take us into the night. We will stay as long as it takes."

"He has ignored a raging pandemic and he fueled the fires of division. He has mostly tweeted...He has utterly abandoned his post as president...He doesn't deserve the presidency any more," @ChrisCoons says of @realDonaldTrump pic.twitter.com/G83AOjZyir

Republican Sen. Mitt Romney condemned the attack on the Capitol as an "insurrection" and pleaded with his Republican colleagues to drop their objections against the Electoral College votes and inform their constituents of Joe Biden's victory in the 2020 election.

"What happened here today was an insurrection incited by the President of the United States," said the junior senator from Utah, speaking from the Senate floor.

Romney then warned his GOP colleagues, who have continued to mislead about the 2020 election, that they were endangering the health of the American democracy and tarnishing their own legacies.

"Those who choose to continue to support his dangerous gambit by objecting to the results of a legitimate democratic election will forever be seen as being complicit on an unprecedented attack against our democracy," he said. "...They will be remembered for their role in this shameful episode, in American history. That will be their legacy."

Romney said lawmakers carry a responsibility to stand up for the truth regardless of the political cost.

"The best way we can show respect for the voters who are upset is by telling them the truth," he said.

"I urge my colleagues to move forward with completing the electoral count, to refrain from further objections and to unanimously affirm the legitimacy of the presidential election," Romney concluded.

Let me be perfectly clear about my thoughts on the unprecedented assault I witnessed firsthand today.

GOP Rep. Tom Reed of New York rose to object to the Arizona electoral college challenge currently being debated on the House floor.

“I rise to object to the challenge,” he said to applause from the Democrats in the chamber, and then walked away from the lectern set up on the Republican side and crossing the center aisle to the Democratic side to finish his remarks from that side.

Reed told the Democrats that he would almost certainly disagree with them on policy in the future, but "I will stand with you tonight and send a message to all Americans that what we saw today was not American."

Senate Minority Leader Chuck Schumer delivered a powerful condemnation of the events that transpired in the US Capitol Wednesday and lay the blame for the violence on President Trump.

"This temple to democracy was desecrated," he said, speaking moments after the Senate had reconvened following the violence. "…This will be a stain on our country not so easily washed away, the final terrible indelible legacy of the 45th president of the United States, Undoubtedly, our worst."

Schumer -- who will lead the Senate starting on January 20 after Democratic victories in this week's Georgia runoffs gave his party control -- then spoke directly about President Trump's role in the mob's attack on the Capitol.

"Make no mistake my friends, today's events did not happen spontaneously," said Schumer. "This President bears a great deal of the blame. This mob was in good part President Trump's doing... his responsibility, his everlasting shame. Today's events, certainly, certainly would have not happened without him."

"Now January 6 will go down as one of the darkest days of recent American history, a final warning to our nation about the consequences of a demagogic president," he added.

"They tried to disrupt our democracy. They failed"

"We will not bow to lawlessness, or intimidation. We are back at our posts, we will discharge our duty under the Constitution, and for our nation. And we are going to do it, tonight. " McConnell said.

McConnell said that Congress will continue the certification process despite the disruption.

"The United States and the United States Congress have faced down much greater threats than the unhinged crowd we saw today. We have never been deterred before, and we will be not deterred today. They try to disrupt our democracy, they failed. They failed. They failed to attempt to obstruct Congress. This failed insurrection only underscores how crucial the task before us is, for our republic," he said.

McConnell added that Congress certified "the winner of the 2020 election."

Congresswoman Nancy Mace said the last few days quickly transformed from the greatest in her political career to the worst.

Representative Mace said her excitement from being sworn in on January 3, as the first Republican woman to be elected to Congress from South Carolina, quickly turned to horror as pro-Trump mob descended on the US Capitol.

"This has been the best and worst week of my life as an elected official," she told CNN's Don Lemon this evening.

"My worst fears came true today, this is a sad day for our nation," she continued. "I'm heartbroken, I'm disgusted and I'm angry and enough is enough."

Calling Wednesday’s insurrection “a sad day for our country,” Republican Sens. Steve Daines and James Lankford said, "We now need the entire Congress to come together and vote to certify the election results...We must stand together as Americans. We must defend our Constitution and the rule of law."

Sen. Kelly Loeffler changed her mind about objecting to Georgia election results in the aftermath of Wednesday's riots.

"I cannot now object to the certification of these electors," Loeffler said.

Her colleagues applauded after her speech.

Delaware - thank you for all your messages and prayers.

I'm safe & I'm well - clear-eyed about the work ahead of us.

But for tonight, we have one job. To certify the election of @JoeBiden & @KamalaHarris pic.twitter.com/zx9hvWiP41

Former President Barack Obama issued a statement following the violence on Capitol Hill where he implored Republicans to "choose reality and take the first steps toward extinguishing the flames."

"History will rightly remember today’s violence at the Capitol, incited by a sitting president who has continued to baselessly lie about the outcome of a lawful election, as a moment of great dishonor and shame for our nation. But we’d be kidding ourselves if we treated it as a total surprise.

"For two months now, a political party and its accompanying media ecosystem has too often been unwilling to tell their followers the truth — that this was not a particularly close election and that President-Elect Biden will be inaugurated on January 20. Their fantasy narrative has spiraled further and further from reality, and it builds upon years of sown resentments. Now we’re seeing the consequences, whipped up into a violent crescendo.

"Right now, Republican leaders have a choice made clear in the desecrated chambers of democracy. They can continue down this road and keep stoking the raging fires. Or they can choose reality and take the first steps toward extinguishing the flames. They can choose America.

"I’ve been heartened to see many members of the President’s party speak up forcefully today. Their voices add to the examples of Republican state and local election officials in states like Georgia who’ve refused to be intimidated and have discharged their duties honorably. We need more leaders like these — right now and in the days, weeks, and months ahead as President-Elect Biden works to restore a common purpose to our politics. It’s up to all of us as Americans, regardless of party, to support him in that goal."


President Trump’s first Secretary of Defense James Mattis called the riots in Washington, DC, today a "violent assault on our Capitol, an effort to subjugate American democracy by mob rule" and said it "was fomented by Mr. Trump.”

Mattis said Trump has used “the Presidency to destroy trust in our election and to poison our respect for fellow citizens has been enabled by pseudo-political leaders whose names will live in infamy as profiles in cowardice.”

Facebook will ban President Donald Trump's account from posting for at least the remainder of his term in office and perhaps "indefinitely," C…