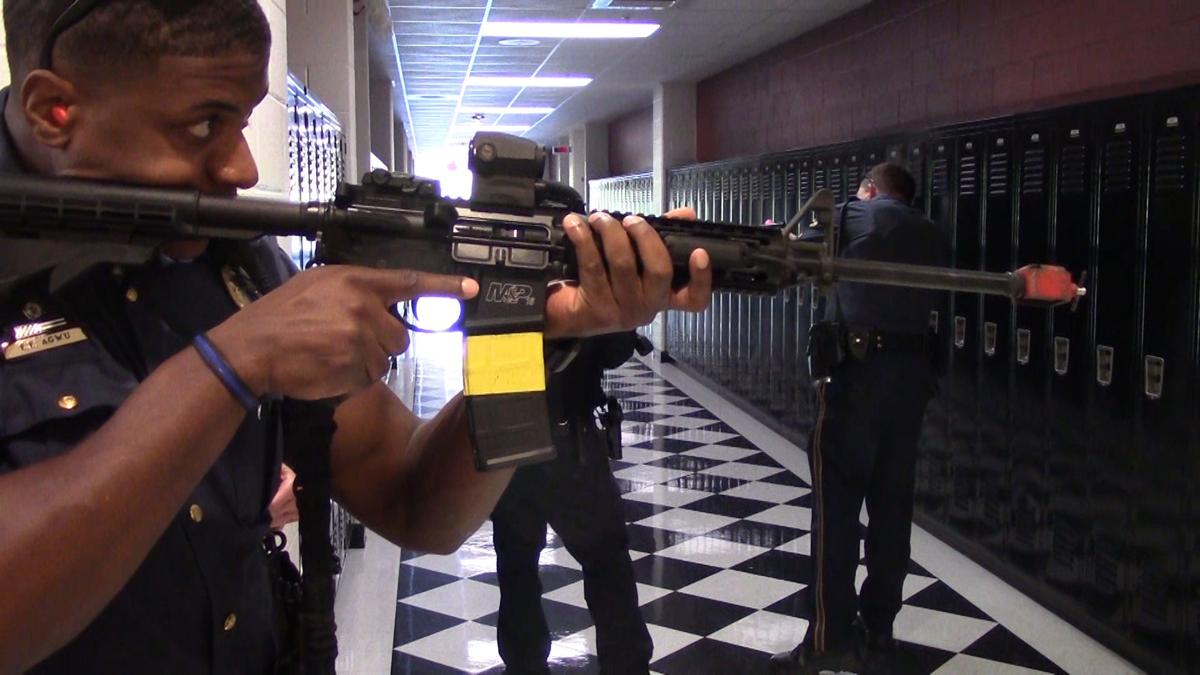 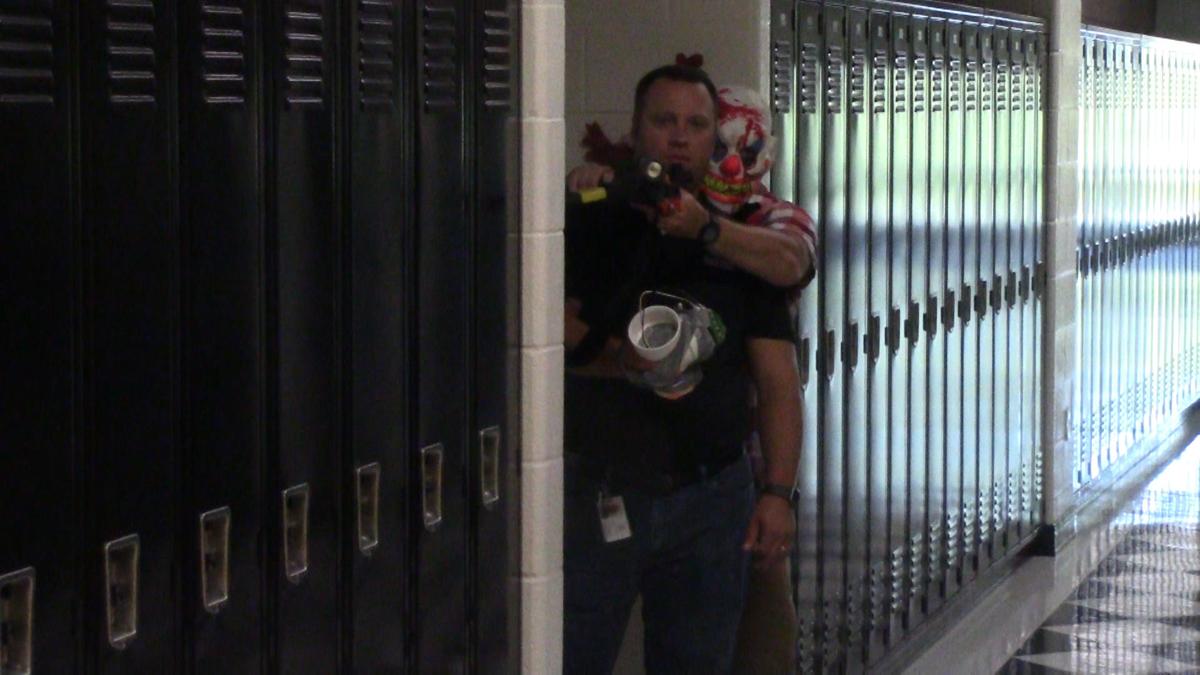 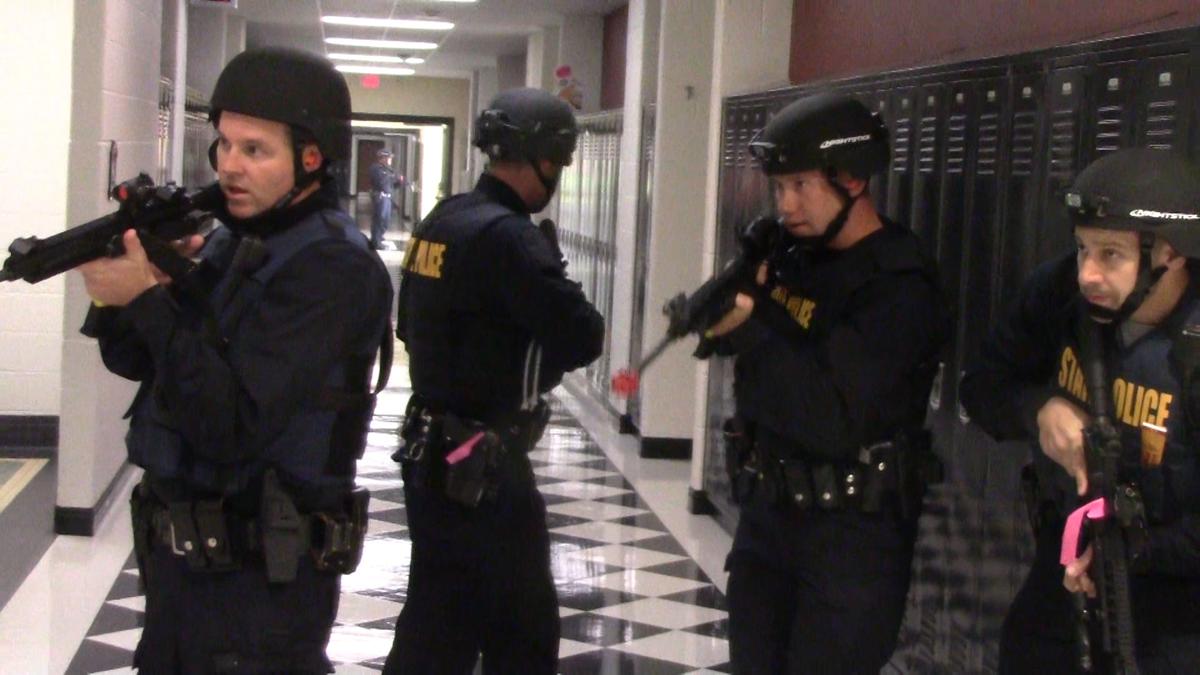 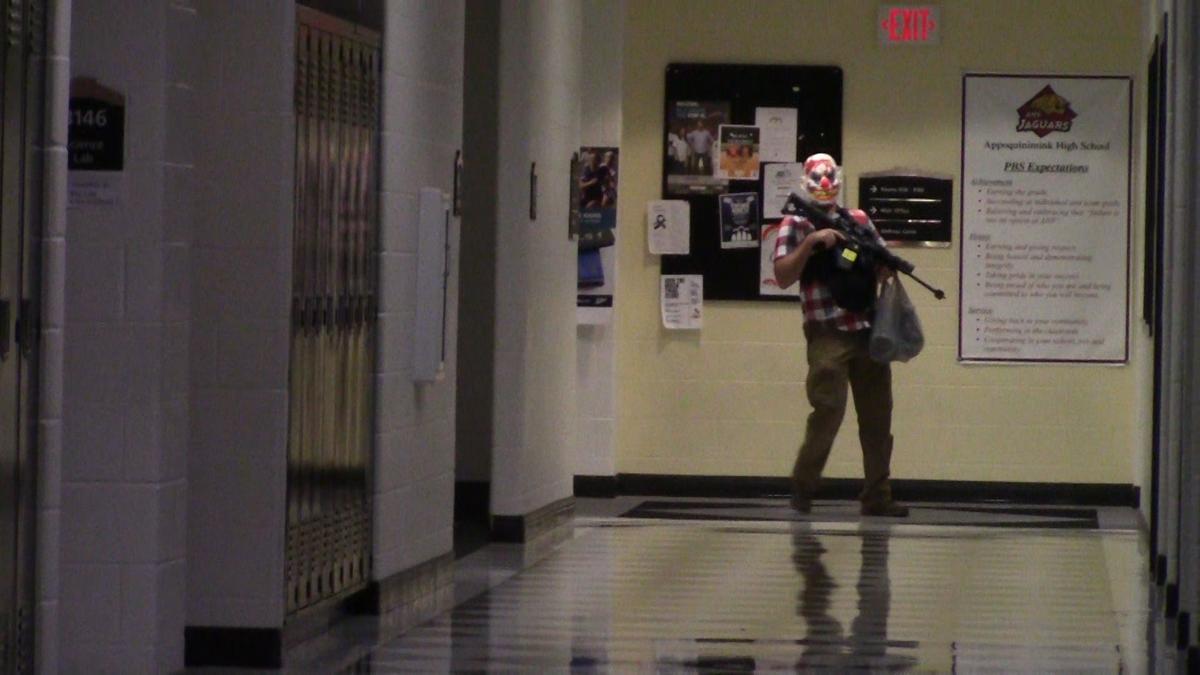 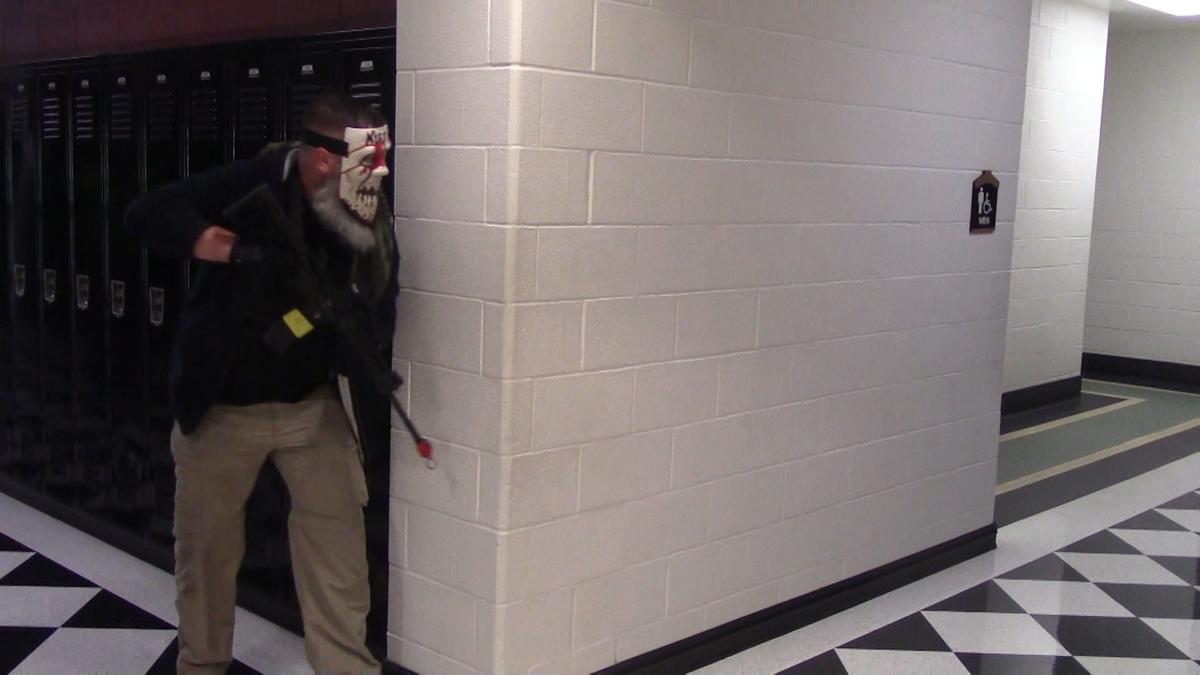 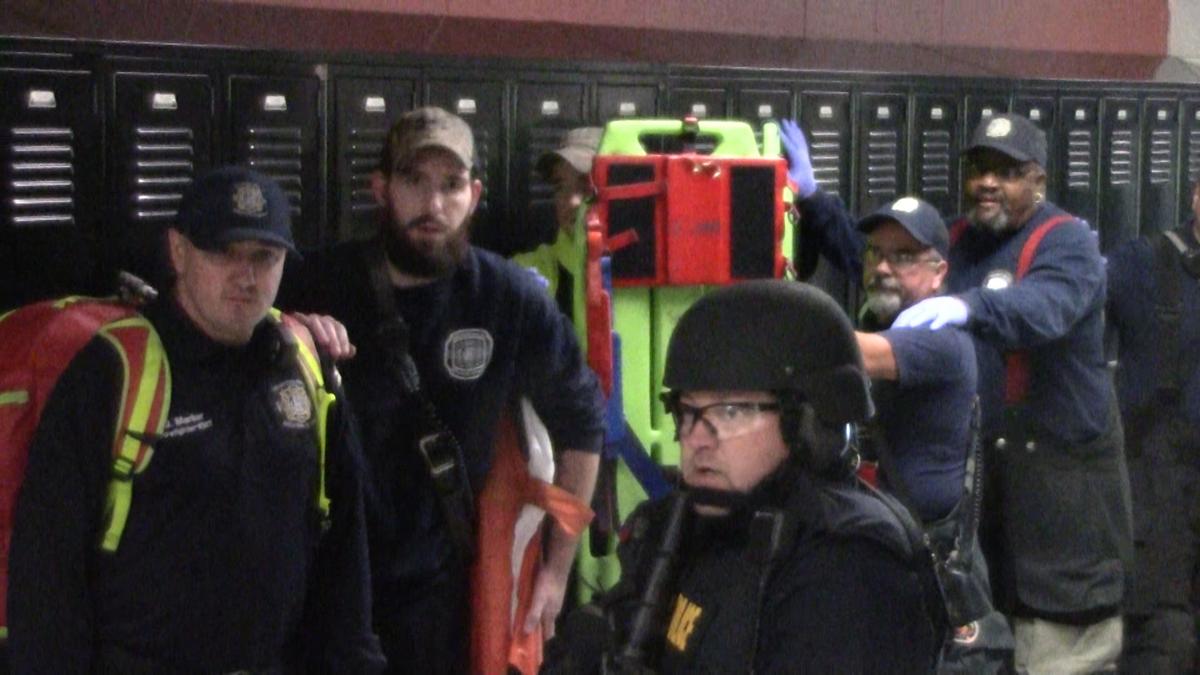 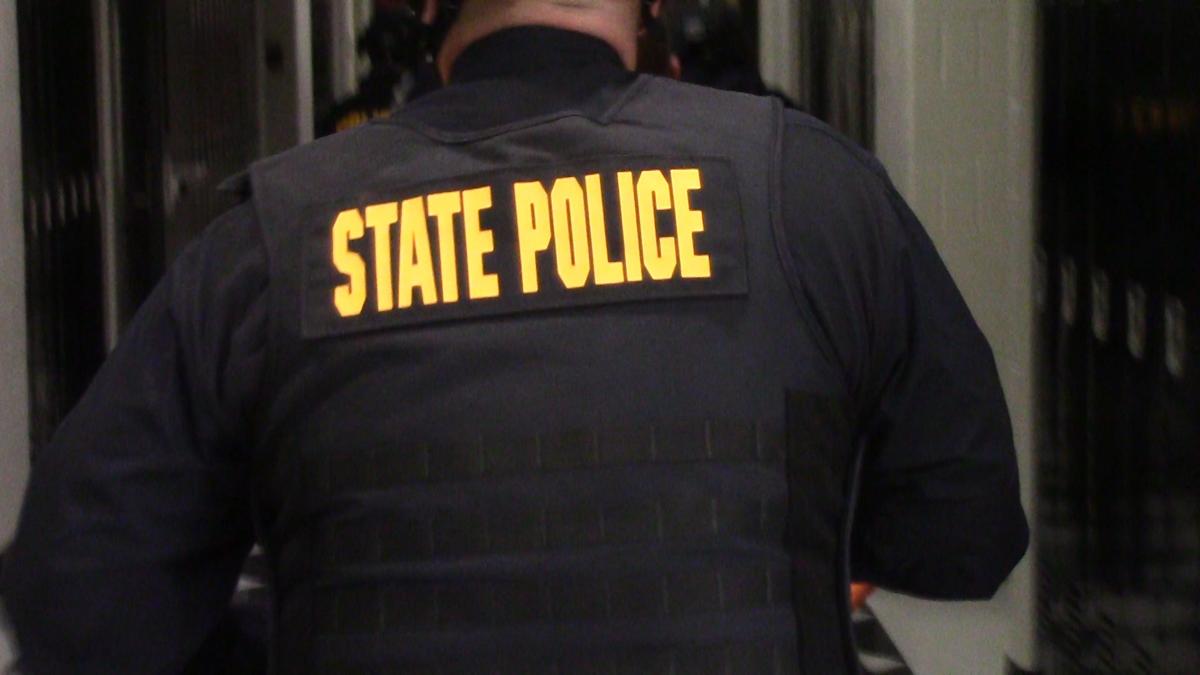 **Warning: the video below includes sounds of gunfire and flash bang grenades**

The Appoquinimink School District held an active shooter drill at Appoquinimink High School on Friday, October 11, 2019 and WDEL was granted exclusive access inside the building during the event.

Students were off for the day, but hundreds of teachers, staff and administrators from across the district stood in for the kids and in some cases became "hostages."

With four bad guys wearing clown masks firing off semi-automatic weapons and tossing flash-bang devices, the drill was realistic enough to peak adrenaline and emotions among many of the participants.

Tom Poehlmann, Safety and Security Operations Director for the district, said for the past year they've been implementing a new active shooter protocol called ALICE.

"ALICE stands for Alert, Lockdown, Inform, Counter and Evacuate. The Counter, Lockdown and the Evacuate are the three options. And the glue that holds it together is the information piece," said Poehlmann.

"We've implemented technology in the district now to allow people to alert each other through an app, it's called the Rave app. What we hope is that people, given the information they have at the time, can take the best option for their safety whether that be evacuate or lockdown or God forbid have to counter an assailant."

Once the bad guys breached the school grounds, Poehlmann and representatives from the district, Delaware State Police, Middletown Police, and the Department of Homeland Security monitored the action, including hundreds of texts that flooded the Rave app.

Several officers from the Middletown police arrived and formed the first contact team which made immediate entrance into the school to track down the shooters.

As more officers arrived, many wearing tactical gear, they advanced into other parts of the building to search for gunmen, escort staff out, and lead EMS units to aid the injured.

Lieutenant Mike Wysock led the Delaware State Police's role in the drill and said it was as important for first responders as it was for the district.

"Any time police and EMS can work together that's huge. This is a chaotic scene. We're used to working together at controlled scenes like car accidents," he said.

"Now we have a situation where we still have potential hostiles inside but we're asking unarmed firefighters and EMS to come in with just us to protect them and still do their job."

Wysock said the bad guy actors even threw some curveballs at police, including planting some fake IEDs.

"That's real world. Nothings ever going to go the way you want it to. So from our perspective we're good at adapting and it keeps us on our toes."

And being a small state gives law enforcement a big advantage in these types of situations on the communication front.

After about 90 minutes the scenario was wrapped up and followed with a debriefing session with all of the district staff.

Poehlmann was pleased with the way the day progressed.

"And working in conjunction with law enforcement--that by the way has just been fabulous--they worked hand-in-hand with us the whole time as we've implemented our active shooter process.

"I think it worked...I think it reinforced the things that we do well and we discovered some things we need to tighten up and improve upon.

"I'm real proud of the district. I'm proud of local law enforcement. If you're a parent in the MOT community you should be really proud of what happened [Friday] and feel good about the actions being taken."