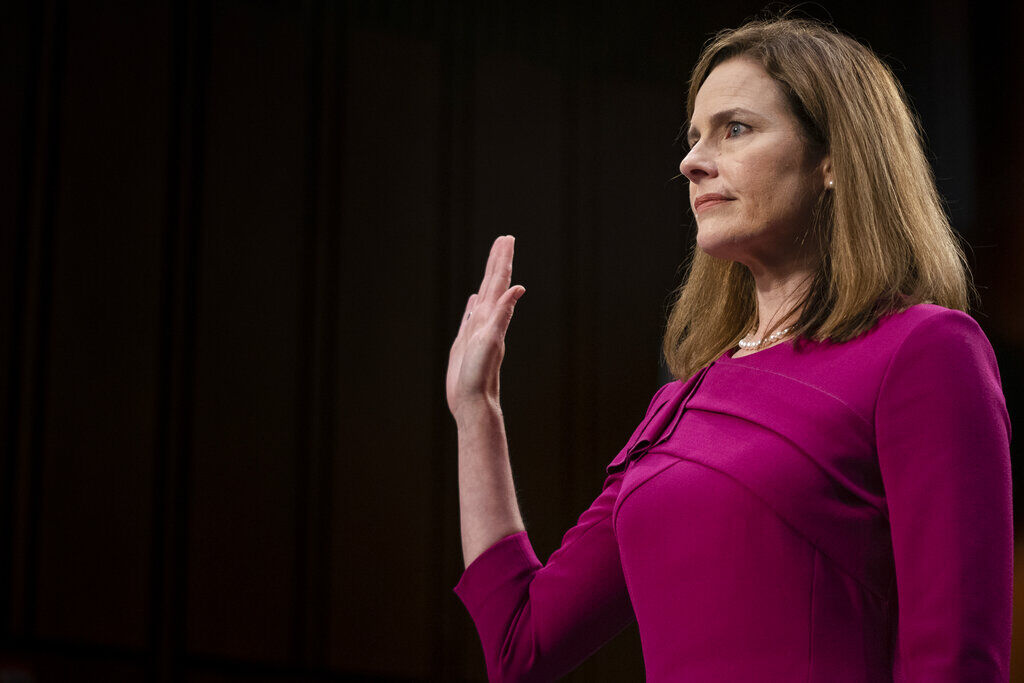 Supreme Court nominee Amy Coney Barrett is sworn in during a confirmation hearing before the Senate Judiciary Committee, Monday, Oct. 12, 2020, on Capitol Hill in Washington. 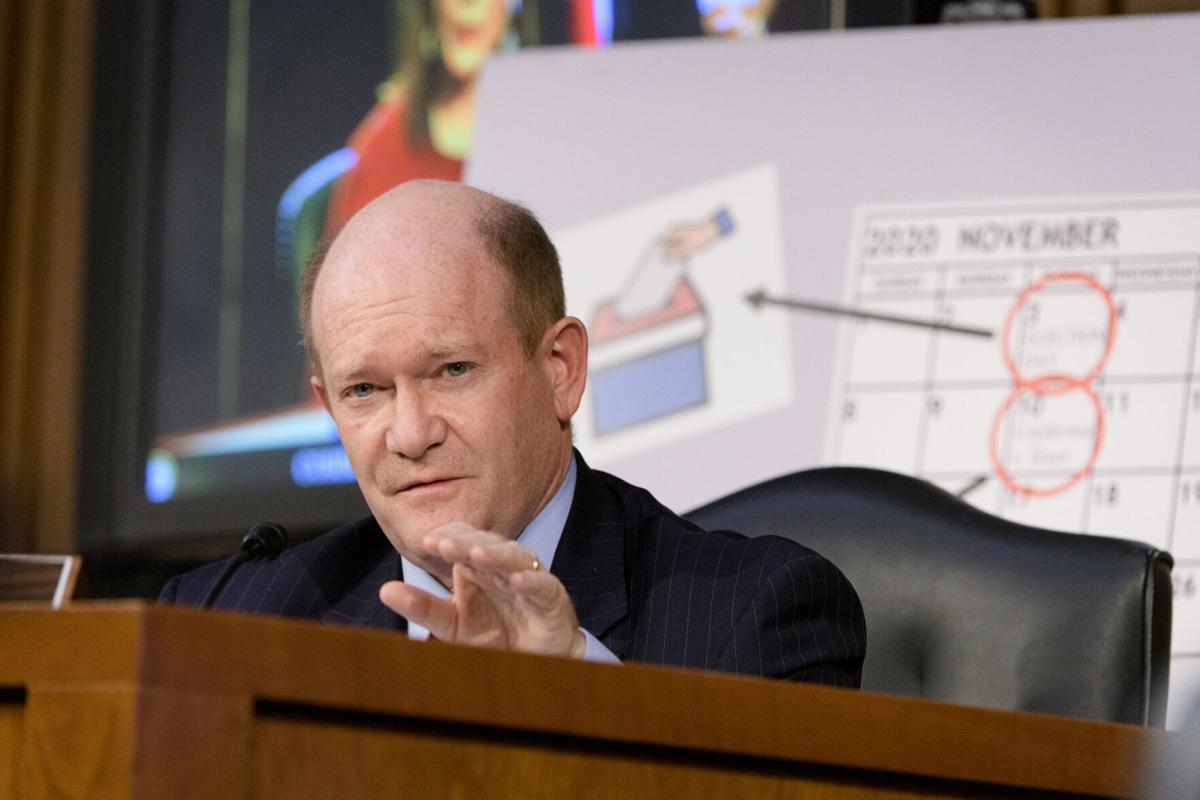 Supreme Court nominee Amy Coney Barrett faced the Senate Judiciary Committee on Wednesday for likely the last time before the Senate votes to confirm her in two weeks.

Barrett again declined to preview how she would rule on potential cases during her confirmation hearing, as she did for the previous two days, seeking to portray herself as an independent judge without an agenda.

Here are some takeaways from the third day of the hearings:

Judiciary Committee Chairman Lindsey Graham seemed to suggest that Barrett would vote to uphold the Affordable Care Act in an upcoming case because of a judicial principle known as severability, defending himself from political attacks in his tough reelection race against Democrat Jaime Harrison.

Barrett explained that the question before the court is whether a section of the ACA can be "severed" if the statute is deemed unconstitutional, or whether the whole law would have to fall, as the Trump administration and several GOP-led states argue.

"The presumption is always in favor of severability," said Barrett.

The exchange between the South Carolina Republican and Barrett at the start of Wednesday's session indicated that Democrats' health care-focused attacks on Barrett's nomination have been politically effective.

"This hearing has been more about Obamacare than it has you," said Graham.

"From a conservative point of view, generally speaking, we want legislative bodies to make laws, not judges," Graham said later. "Would it be further true that if you can preserve a statue you try to, to the extent possible?"

"That is true," Barrett responded.

Democrats go in the other direction on Obamacare

Democrats were not deterred by Graham's suggestion that Barrett would uphold the ACA.

California Sen. Dianne Feinstein, the Judiciary Committee's top Democrat, also asked the nominee about the severability doctrine. Barrett explained to Feinstein that the doctrine was like a game of "Jenga," where a court must decide whether a law can stand if it pulls out part of it.

Vermont Democratic Sen. Patrick Leahy said that Barrett had not written or spoken in defense of the ACA but had publicly criticized the court and Chief Justice John Roberts for voting to uphold sections of it. Barrett said on Wednesday she had previously spoken as an academic rather than as a judge, and had "never had occasion to speak on the policy question."

Barrett later told Minnesota Democratic Sen. Amy Klobuchar, "I have no animus to, or agenda for, the Affordable Care Act."

Leahy also pressed Barrett on whether Trump can pardon himself as he claims. Barrett said, "No one is above the law," but declined to answer the question, saying it "has never been litigated."

"That question may or may not arise but it's one that calls for legal analysis of what the scope of the pardon power is," said Barrett. "So because it would be opining on an open question when I haven't gone through the judicial process to decide it, it's not one in which I can offer a view."

Delaware Democratic Sen. Chris Coons asked Barrett if she agreed with her mentor and former boss, the late Justice Antonin Scalia, that Griswold v. Connecticut, which established that married couples have a right to obtain and use contraception in the privacy of their own home, was wrongly decided.

She explained that it's "unthinkable that any legislature would pass such a law" prohibiting the use of birth control and that it's "very unlikely" a lower court would buck the Supreme Court precedent.

Barrett said that "the only reason that it's even worth asking that question" is because the 1965 case underpins the 1973 landmark case Roe v. Wade, which found a constitutional right to abortion. "So because Griswold involves substantive due process, an area that remains subject to litigation to the country, I don't think it's an issue or case that I can opine on," she said. "But nor do I think Griswold is in danger of going anywhere."

"I was under the impression that you are a different person than Justice Scalia, and that you had your own words, your own mind," he added.

Harris said at least 23 states have passed restrictive voting laws since the Supreme Court decided the case in 2013. She then asked whether Barrett agreed with Chief Justice John Roberts, who wrote in that opinion that "voting discrimination still exists; no one doubts that."

Barrett said that she would not express an opinion on potential litigation before the court.

"I think racial discrimination still exists in the United States, and I think we've seen evidence of that this summer," added Barrett.

Harris later asked Harris if Covid-19 is infectious, whether smoking causes cancer and whether climate change is "happening and is threatening the air we breathe and the water we drink."

While Barrett acknowledged the first two as fact, she said that climate change is a "very contentious matter of public debate."

"I will not do that," she said. "I will not express a view on a matter of public policy, especially one that is politically controversial because that's inconsistent with the judicial role as I have explained."

Republicans confident that Barrett will be confirmed

Republican senators appeared confident on Wednesday that they will confirm the Notre Dame law professor and judge on the 7th US Circuit Court of Appeals by the end of the month, giving conservatives a strong 6-3 majority on the Supreme Court.

"The last three days of hearings have revealed very good news," said Texas Sen. Ted Cruz. "Judge Barrett is going to be confirmed by this committee, and by the full Senate."

The Judiciary Committee will meet at 9 a.m. ET Thursday to vote on Barrett's nomination, and Republican members will have enough members present for a quorum. Democrats will use their power under committee rules to delay the vote until October 22, according to a Senate GOP aide.

After that is all finished, the committee will hold the fourth day of the hearings, with testimony from outside witnesses for and against Barrett's confirmation.

Barrett is not expected to appear again after 18 hours of questioning from senators Tuesday and Wednesday.

Perhaps her most candid moment was when she admitted to having a glass of wine on Tuesday evening, after an 11-hour hearing.

"I will tell you that I needed that at the end of the day," she said to laughter.

Connecticut Democratic Sen. Richard Blumenthal replied: "Let me just say, on that kind of point, you have a right to remain silent."

The Senate Judiciary Committee voted Thursday to advance the nomination of Judge Amy Coney Barrett to the Supreme Court, setting up a final vo…