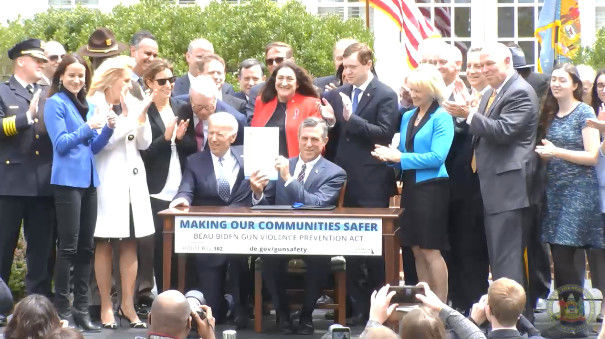 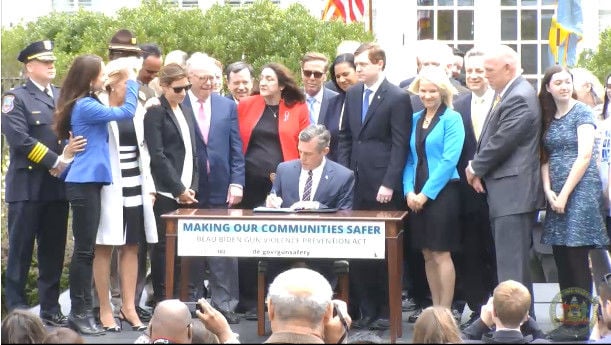 “Today fulfills a promise our son, Beau, made to the people of this great state, that he wasn’t going to give up on common sense gun violence prevention,” said former Vice President Joe Biden. “It’s something he worked for his whole professional career.”

Beau Biden, the vice president's son, was a strong advocate for gun violence prevention during his time as Delaware's Attorney General.

Bentz said many people had been working to see the fulfillment of this legislation.

“I know the governor put the full force of his office behind this,” said. Rep David Bentz, introduced by Assanis as the primary sponsor of the bill. “We had everyone working together hard on this one.”

The legislation faltered the first time around. According to Bentz, discussions with legislative leaders and Governor Carney last fall indicated that the time was right to try again.

"The idea was familiar to people. We were going to push it hard and get this thing done this time," Bentz said.

The governor said this was an accomplishment that put Delaware's bipartisanship and familial identity on display.

“We are special," Carney said. "[Today] is a testament to what makes Delaware special."

Beau Biden's sister recalled when her brother started this journey for greater gun violence protections in Delaware more than five years ago.

Disagreeing is difficult, but working through disagreements to the successes of real, tangible change, is important, because doing nothing is dangerous.

"There is room to talk with people with whom you may have profound differences," former VP Biden said. "It matters that we engage one other. And that’s what we did, and it’s paid off… Beau is, in many ways still alive; still with the family; still with us."

In the wake of the Santa Fe High School shooting in Texas which killed eight students and two educators, one state lawmaker has unveiled his p…