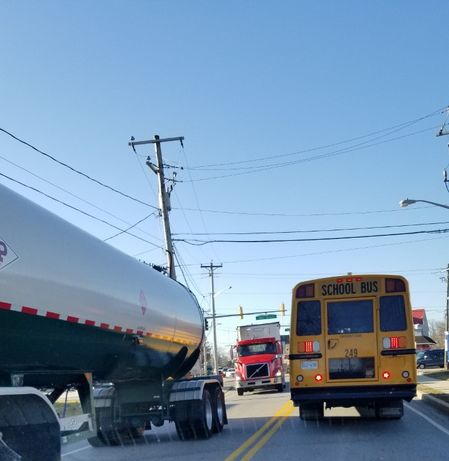 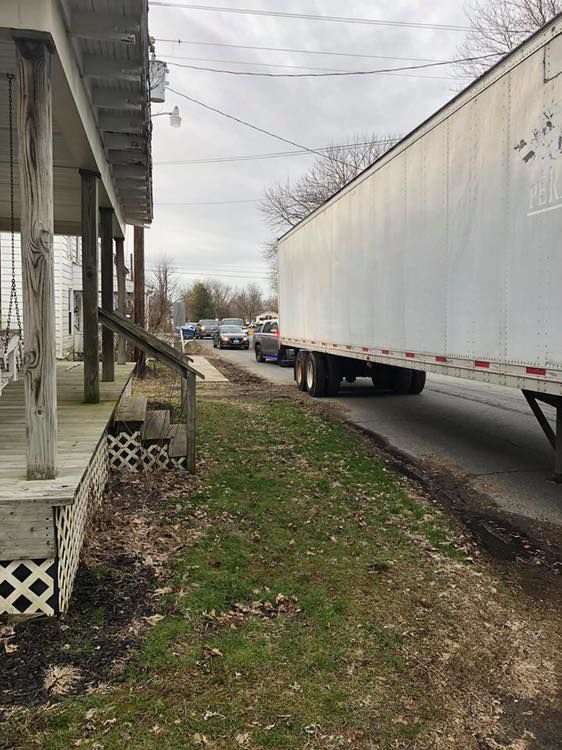 Six weeks since the brand new stretch of toll highway built along US-301 was opened to traffic, many of its target users have been found to be bypassing that roadway.

The evidence, although mostly anecdotal, has been overwhelming in many of Maryland's smaller communities in southern Cecil and Kent counties.

"The roads aren't designed for these sized vehicles," he continued. "The roads are being destroyed and [there's a] general inconvenience to people that have lived there for 30 or 40 years and have never had to wait for five minutes to get out of their driveway as a line of traffic goes by."

The Delaware Department of Transportation (DelDOT) acknowledged that truck traffic using ill-equipped county roads in Maryland has been a problem, albeit one that's existed for some time.

"Maryland has been dealing with truck traffic issues on [MD-]213 and surrounding roadways prior to the new [US-]301 being built and opened," reminded C.R. McLeod, DelDOT's Director of Community Relations. "So there's been an ongoing truck issue that these communities have been dealing with over a number of years."

When DelDOT initiated a public outreach and involvement program in 2005, Maryland communities were a part of that process, according to Zang.

A range of alternatives was then presented later in 2005, with a preferred alternative for the proposed new corridor determined by May 2007.

"And then of course the project sat dormant when the economy decided to go south (in 2008-09)," Mayor Zang recalled. "They slowed things up and then revived it 8 to 9 years later. Well, they never re-engaged those groups of people, or at least that's what they said at [a recent] meeting . And I think that was a mistake because the world changed, habits changed, technology change[d]. That's a tremendous span of time in today's world to not take another look at what traffic patterns are doing and what people are seeing."

"Right, it's been sometime since we did it," responded McLeod, "but we did it at the appropriate time in the process. There was never any discussion about needing to come back and revisit this. I don't know what would've changed in their minds that would necessitate us [to come back to them]."

DelDOT had previously issued a report in May 2015 which disclosed that Jacobs Engineering Group had been contracted in 2013 to conduct an independent study of traffic and to develop toll estimates for the proposed US 301 Toll Road.

Additionally, the report summarized that since that time when the firm was initially assigned, additional traffic and socio-economic data had become available which warranted a change in the planned opening date. That information also adjusted the traffic and revenue estimates which DelDOT incorporated in the report.

"On the new roadway specifically, it is meeting our expectations," McLeod announced. "[It's] a small sample size but the traffic that we are seeing on there is very encouraging for the estimates that we put together." 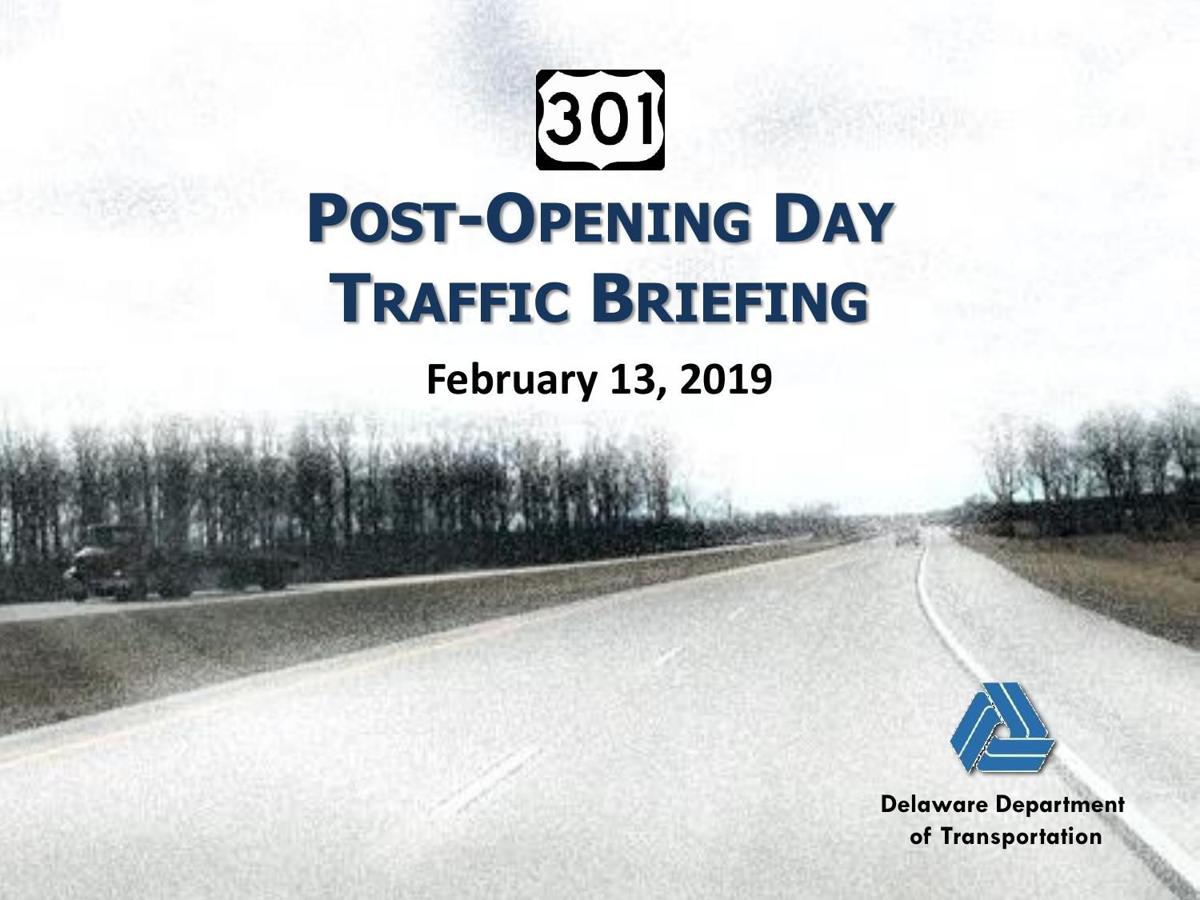 "For the first year, we estimated there to be about roughly 6,300 vehicles per day using the roadway, with about roughly twenty percent of that traffic being truck traffic. And again, what we're seeing initially does very closely mirror that."

That hasn't been consistent with what Mayor Zang has seen near his office in Chesapeake City, nor in his town of Cecilton. And he argued that the increase in truck traffic through the Maryland communities is a matter of public safety.

"If a tractor trailer is on that road and an emergency vehicle [is] coming at it, somebody is going to lose," the mayor illustrated. "Because the truck is not going to be able to get out of the way.

"You've got school buses," he added. "We have fields along those roads that have no crops in them right now. Once those crops get up, visibility is going to be terrible and people that are unfamiliar with those roads--that are traveling them to bypass a $4 toll because they want to get from Middletown to Maryland--they may have an issue."

Then there's the inconvenience of the toll itself to the Maryland residents.

"We have eliminated a car or a pickup truck from getting to Middletown, without paying a toll, that was always there," explained Zang. "It was always free to get from Maryland into Delaware. So now all of those vehicles are forced to either pay the toll or go around."

That argument has little merit for McLeod.

"The new roadway was never meant to help the local traffic to go back and forth into Delaware to do their shopping," he insisted. "It was always anticipated that that traffic would move to local roads to move back and forth across state lines without paying the toll."

That assertion taken at face value, then, would seem to give merit to the concerns of Maryland communities regarding additional truck traffic. And Mayor Zang expects Delaware to do its part to resolve the issue.

"Let's think about this," the mayor offered. "Trucks typically want to use a path of least resistance. So the bypass was a great idea. But I think there's a problem with the communication on the Delaware side to those trucks that they can't get through."

"Strawberry Lane is one of the main problem areas," he revealed. "The trucks are coming through the overpass that goes over 301 and actually [directs onto] a Cecil County section of road which is Wilson Street. And that road is not set up or designed to handle truck traffic of that size. It's just an older county road that basically was designed for smaller vehicles to utilize."

Fender suggested that most of the truck offenders have likely left the toll road from the southbound lanes at Levels Road, the southermost interchange, in order to access the travel plaza located on the old section of US-301.

"What's happening is the trucks were coming out of there and they didn't realize, or there wasn't enough signing to tell them, [not] to make a right to go out to Strawberry Lane because it's a restricted road."

Fender acknowledged that DelDOT has placed more fixed signs and variable message boards in that area to address that problem. However, there's been a second deterrent for trucks to stay on the toll road.

"If they get off [at Levels Road] and they have to get back onto 301 southbound, I think they incur another toll," he shared. "So it's kind of a double toll."

McLeod confirmed that oversight and maintained that DOT was working to correct it.

"DelDOT agreed that that was not fair and we are actually going to be implementing a trip match that will allow trucks [that've paid the toll] to get off the roadway, visit the travel plaza or one of the other businesses, and then re-enter the roadway within a certain amount of time without having to pay an additional toll."

Mayor Zang had still another proposal for DelDOT.

"I think the thing to do is to talk to some of the truckers and find out why they're using the route they're using. Are they uninformed or are they going around the toll?

"They will admit it because it's an inconvenience. They want their lives to be as convenient as possible. They have a hard job. It's not easy."