A roadway resurfacing project in Newark will soon present a new travel configuration for motorists and multi-modal users alike.

When it is completed later this month, the stretch of Cleveland Avenue--predominantly flanked by an auto mall since the 1980s--will no longer deliver a total of four lanes for two-way traffic between Paper Mill Road|North Chapel Street and DE-2|Capitol Trail.

"It's a compromise between roadway capacity versus safety versus other modes of transportation," explained Matt Buckley, Transportation Engineer for Whitman, Requardt and Associates, a consulting firm for the Delaware Department of Transportation (DelDOT). "And this certainly has been, from a safety standpoint, looked at very heavily over the last 15 to 20 years."

That portion of the corridor, due to its vehicles-only design with no shoulders or turn pockets, has historically had safety problems. From 2011 through 2014, for example, there were 358 crashes.

"If you're trying to make a left turn out there, across the other two lanes of traffic, you are a sitting duck," Buckley quipped, "as people are swerving in and out of traffic."

Crash statistics reported by Newark Police Department have shown a proclivity for side-swipe strikes, due to motorists abruptly changing lanes, as well as rear-end collisions, from when trailing vehicles don't react in time to a stopped vehicle in a travel lane.

"Then there are some angle crashes associated with people trying to make that left turn across two lanes of traffic and they're just choosing a gap unsafely," added Buckley.

To eliminate the factors responsible for the majority of those collisions, planners have determined that reducing travel to a single lane in either direction should be sufficient.

"When you just use some common sense, look at the number of lanes that are entering the corridor--a four-lane road but it's only being fed, in each direction, by one lane of traffic--it kind of makes sense."

In addition to the "road diet," as it's known, the design calls for a  two-way left turn pocket for much of the corridor and then a dedicated eastbound left turn lane at the signalized Winner Boulevard, located about mid-block.

"But if you are presently one of the thousands of motorists [who] use the mega intersections at Paper Mill or Capitol Trail, you're arguably not going to see a difference," noted Buckley. "It's really the mid-block where you're going to see less friction [and] you're not going to see people stopped in the middle of thru lanes."

Although capacity on the roadway will be reduced, the formalized area for left turn movements should create a trip that rides more free. As a result, Buckley said he expects that travel speeds will decrease, as motorist aggression does the same.

"It's definitely organizing something that, before, was more chaotic in nature." 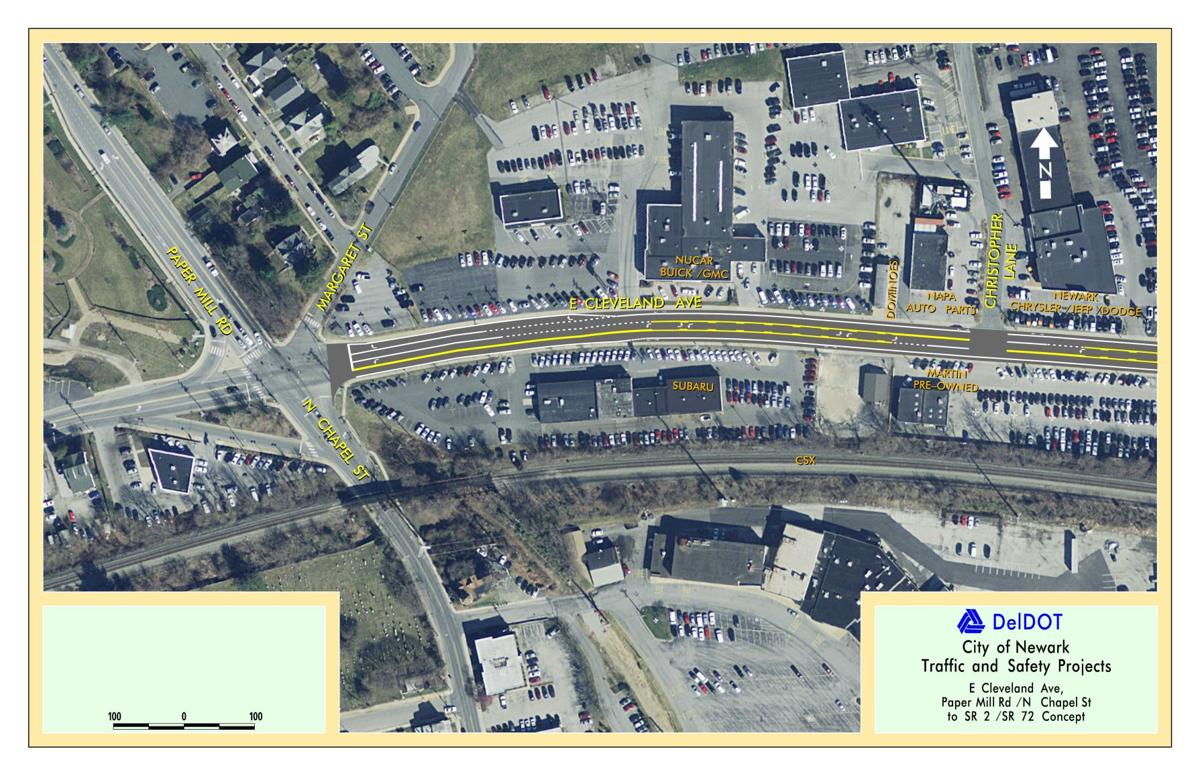 Other modifications to the corridor--some of which won't be incorporated until the completion of the "road diet" phase of the project--are five foot  bike lanes in either direction, as well as another crosswalk for pedestrians.

"When you look at bicycles and pedestrians on that stretch, from Capitol Trail to Paper Mill, it's equally as bad," admitted Buckley. "One of the final task force recommendations for this segment is to install a new crosswalk, with a warning device, and a refuge island. That's going to be west of McKees Lane, so it's going to line up with some internal sidewalk at Alder Creek."

The repaving phase of the project, along with striping, signage, and the rewiring of below-grade signal trips, is expected to be fully completed by the weekend of August 18-19, 2018.

VIDEO: Engineer: Worst intersection in state is in Newark