A brief, yet noticeable, break in continuous commuter rail service between Spotsylvania, Virginia, and New London, Connecticut, has been a long term focus for a transportation planning agency in Delaware, as it considered options to permanently eliminate the void.

"WILMAPCO has been looking at this since before 2000, so late [19]90s," revealed Dave Gula, WILMAPCO Principal Planner. "One of the things that bothers us, of all of the [460] miles of commuter rail between Richmond [VA] and Boston [MA], we've got one 20 mile-plus stretch with no commuter rail."

Although riders can navigate the gap using Amtrak Northeast Regional trains, via the Northeast Corridor (NEC), it's not priced for regular commuter use.

"You can't hop from one commuter train to another to get from Perryville, Maryland to Newark, Delaware," Gula added.

The service gap entered the purview of WILMAPCO during the Base Realignment and Closure Act (BRAC) of 2005 for Aberdeen Proving Ground (APG). That process aimed at transforming the United States military installations, located in Maryland, in order to create a more efficient, and more adaptable, operation. As a direct result of BRAC, the United States Army's Command, Control, Communications, Computers, Intelligence, Surveillance, and Reconnaissance operation (Team C4ISR) moved to APG.

"We looked at this really hard and just noted that we can't get people from Newark to Aberdeen, except by car. That was a major issue for us. Not everybody is going to get out of their car, but if you don't even provide the option for people to ride their bike or take transit, you're basically saying it's a car-based society."

Since identifying the need for this connection, WILMAPCO has worked to develop multiple planning projects to see it through to completion.

"We've been an advocate with MTA to push for planning and funding of an Elkton train station, which would be an integral part of its expansion north to Newark," shared Gula. "We really want to see the connection made and we've been actively working on this project with Kevin Quinn (MDOT MTA Administrator) since 2015, when we were asked by MTA to do a full ridership projection from Washington D.C., all the way to Philadelphia." 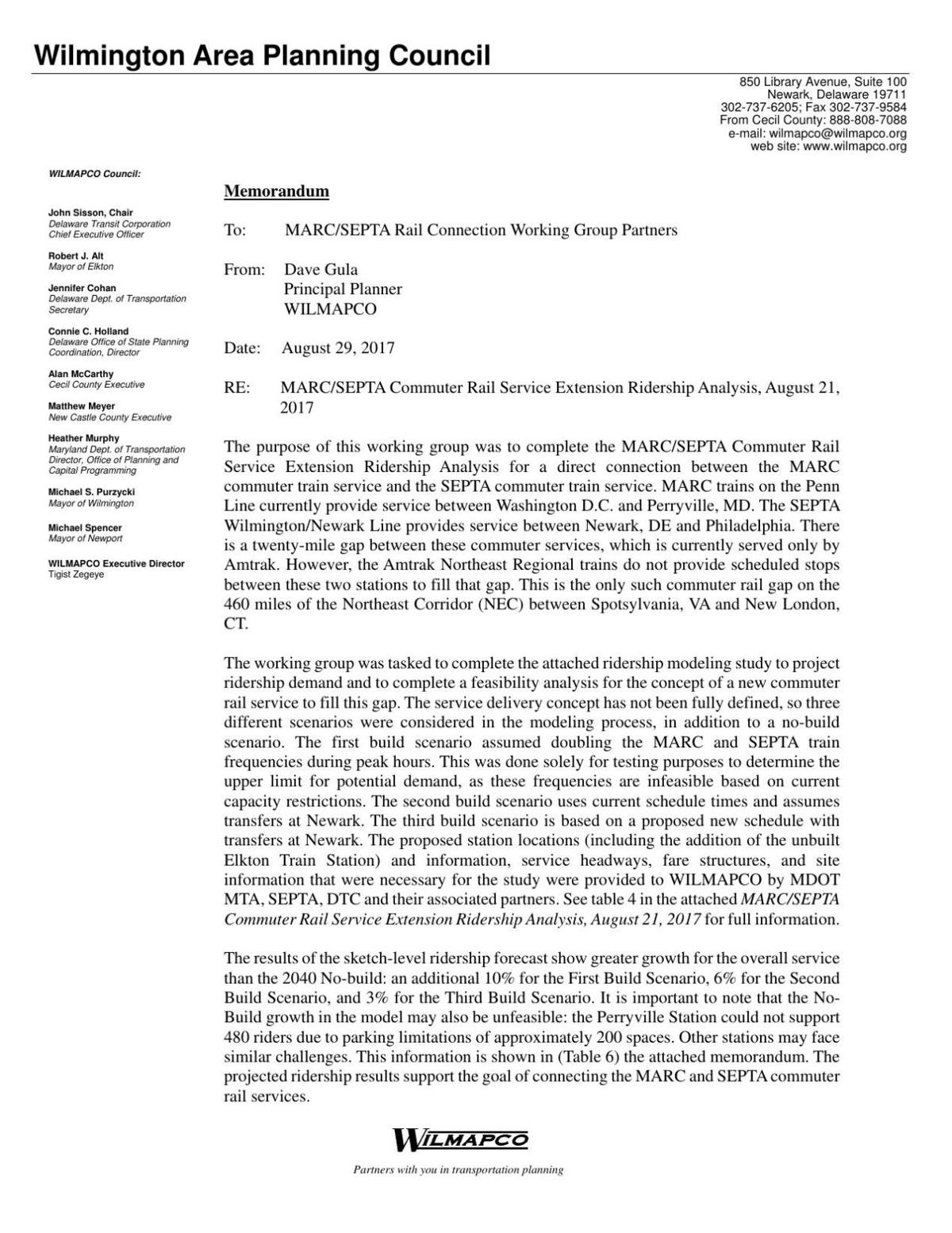 Gula indicated how feasability studies previously performed by WILMAPCO, as well as the MTA's request for a ridership projection, proved there would be an increase in rail ridership if the two services were to connect.

"It shows 24 percent growth if you don't build anything, if you just keep running the service the way it is. But it shows that, with different scenarios, we're [as high as] 36 percent growth. So we're adding another 12 percent if we ran a really intensive schedule connecting the two [commuter rail lines]. If it's less intensive, we would see anywhere from a 4 percent to 8 percent growth, above and beyond [the growth rate from a no-build scenario]."

The last train to make a scheduled stop at Elkton's historic train station, according to WILMAPCO's quarterly newsletter, was April 25, 1981. However, it was not used in a commuter capacity.

"Before Amtrak, the individual railroads--Pennsylvania, Reading, Baltimore & Ohio--all had their own passenger and freight services," Gula reminded. "Then there was an Amtrak train called the Chesapeake which served Elkton. Amtrak [still] owns that station, and they use it for maintenance and things like that."

Today, as the prospect of supplying commuter rail to Maryland's northeast corner continues to develop, WILMAPCO must address other hurdles which arise from the projected expansion of services.

"Growth at some stations, we can't even accommodate now," Gula acknowledged. "In Perryville, going from 180 riders to close to 480 riders, we don't have the parking to sustain that. That's a major issue. We could probably do about half of that, or less. Probably around 200 spaces is where we start to max out."

The Newark train station is better equipped to take on additional riders, with the alteration and expansion of existing parking facilities, in conjunction with the growth of the University of Delaware STAR Campus.

"Newark is going to serve both as a connection station, a transfer point, but it's also still going to draw people who have to drive. Right now, it's an end-of-the-line station, so you always have to have more parking there. But even when there's a connection, it's going to be the end of two lines so we'll have to phase our parking to accommodate the kind of growth we expect."

While a timetable for the connection of the MARC and SEPTA commuter rail lines, between Newark and Perryville, has yet to be established, WILMAPCO continues to act as a liaison between MTA and DTC.

"Really, at this point, it's just trying to get the two agencies to work together on an actual plan."