Nearly a month after a coalition of community organizations lodged a series of complaints about Wilmington's parking systems, the city is refuting claims that its parking and ticketing systems aren't ethical.

The city said its response to the allegations took an "extraordinary amount" of time to research and summarize its findings.

"The coalition emails suggest improprieties on the part of the city regarding the implementation of its ticketing and towing practices. The not so veiled allegations imply that the city and its agents (the towing contractor) take advantage of Wilmington residents and others by unjustifiably towing automobiles and then selling them before the owners have a fair opportunity to redeem them. Further allegations are that the city issues parking tickets outside of a perimeter where ticketing is legal thereby profiting from an illegal practice. The coalition suggests that our Parking Enforcement Officers have ticketing quotas and that the practices in question all have a profit motive for the City and that due process is being denied our citizens. Unfortunately, this is a consistent theme underlying virtually all of the inquiries," the city said in a report.

The city added its "confident" in the review its conducted and that its towing and ticketing practices are "ethical."

"The city’s towing and ticketing practices are consistent with the law and are performed with due process afforded to the public and ethical standards of conduct. Vehicle owners are not being taken advantage of. No one is being denied an appeal. And as will be obvious with respect to issuance of parking tickets, booting and towing, there is no profiteering on the part of the City of Wilmington. While the facts run counter to the coalition’s suspicions, we are confident in our findings which show virtually no improprieties uncovered by our research. The city is simply doing its best to enforce its laws. In the very few cases where tickets were improperly documented although otherwise properly issued, the city has voided," the city said.

Page four of the city's report notes: "There has never been any type of quota associated with the work or performance standards of city parking enforcement officers."

However, a 2012 article in The News Journal accessed on Wayback Machine and screenshotted, shows the city must have had some kind of quota, at some point.

"In 2012, Wilmington ticket writers were told to step up enforcement. The goal then was to write 25 tickets a day, but some were writing only one or two, Wilmington officials said at the time. Not meeting the daily goal was costing the financially strapped city about $3 million a year, said Finance Director James Jones, who said ticket writers should issue 30 or more tickets a day," the article said.

Page nine of the report also notes:  "The City does not deny anyone the right to have their case heard in court."

But Stephany Pachowka begs to differ. In October of 2019, she received a parking ticket, despite paying for her parking spot using ParkMobile. She appealed the ticket within a week.

"Apparently the Parking Enforcement Officer didn't notice that while the numbers on my license plate and in the ParkMobile system are the same, the Parkmobile system simply didn't include the letters 'PC' - the clerk agreed, and I thought the matter was resolved," she told WDEL.

Then, in December, she received a notice, saying she'd failed to respond to the ticket and now owed $60. She said it was impossible to reach anyone by phone on the matter.

"For several days I called the city multiple times in an attempt to resolve the matter, but was simply put on hold each time. I finally connected with a live person in January who said my appeal in November had been denied. I never received a notice of that," she said.

"Furthermore, I was told that the time to appeal to J.P. Court had already expired...I would say that yes, I was denied an appeal and I was denied access to the court," she said.

The issue was finally resolved in March of 2020 with help from a Wilmington Parking Coalition member.

John Rago, the Deputy Chief of Staff for Policy and Communications, declined to answer quetions in an interview about the report, saying it "speaks for itself." He has not responded to WDEL's interview request to sit-down with Mayor Mike Purzycki to discuss parking issues.

Read the full report which responds to each allegation lodged by the coalition: 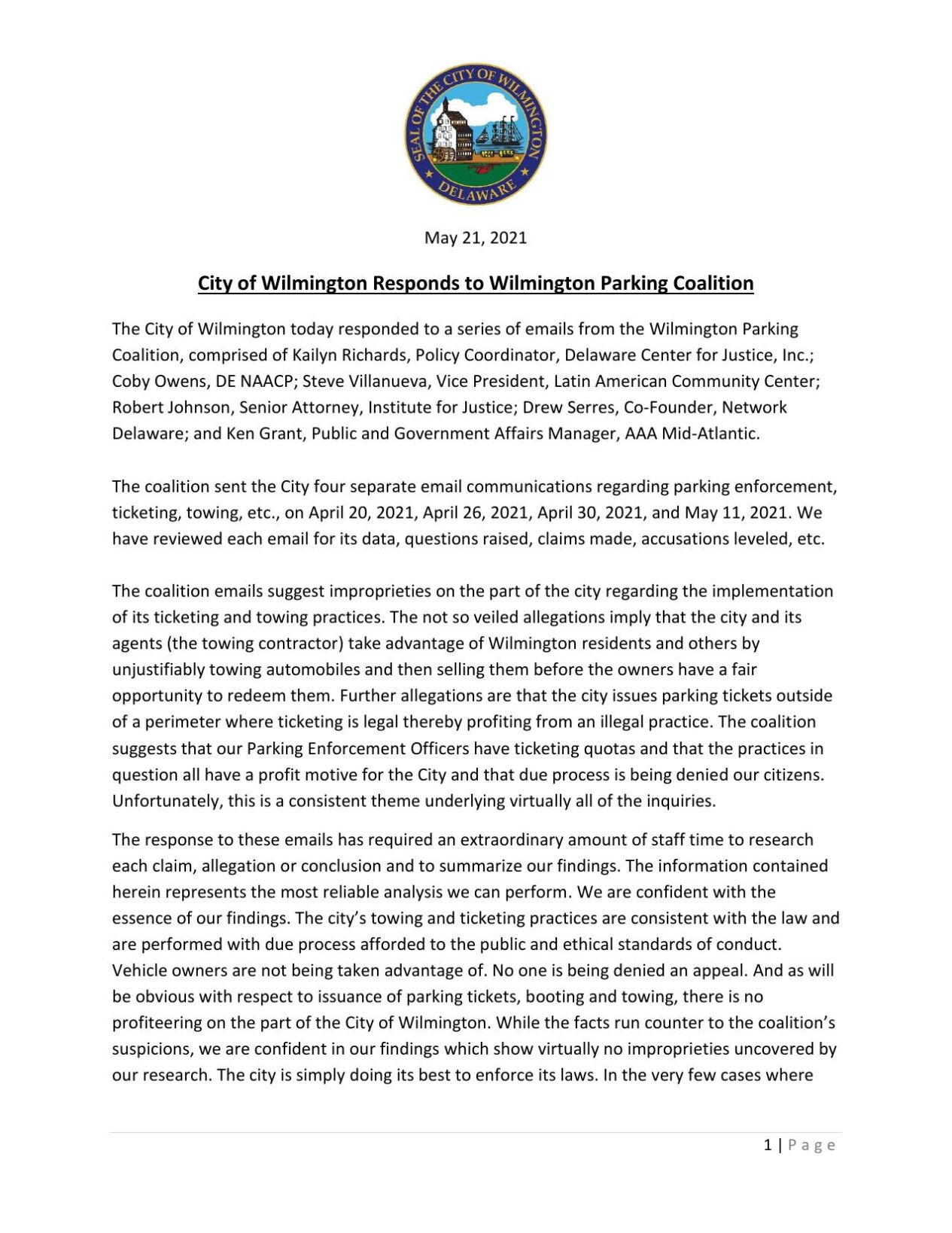 In response, the coalition said in a statement that it remains optimistic about starting a dialogue on behalf of constituents, residents, and visitors.

"The coalition has been clear from the beginning that we did not have access to all of the city’s data. Our interpretation of the data and our own first hand experiences raised questions that only the city could answer.

The fact that the city took four weeks to respond underscores the confusing nature of Wilmington’s parking, booting, towing, and appeals system. Good government is as much about efficiency as it is about transparency. Our objective remains the same and we look forward to working with the city to clear up any misconceptions or rectify any problems this dialogue uncovers."

If Wilmington largely halted towing for most of last year during the COVID-19 pandemic, then…