For the 6th annual Peace Week Delaware, the traditional finale, the March for a Culture of Peace, will instead be replaced by the Pacem in Terris March for Justice.

Sarah Green, new Executive Director for Pacem in Terris, which is Latin for "peace on Earth," says the move remains based in the values and ideals they've always shared with the community.

"It's just a chance for all community organizations to come together, show what they're doing, bring people out and share nonviolent techniques and approaches that can help us all do better in our own lives and with our work in the community," Green said. "We are just trying to spread the word of how peace can help all of us in our lives, and it's not just the absence of violence, but it's really when we can all thrive. That's what [it is] really about: just trying to restore our communities, and ourselves, and our relationships."

But this year, there's a slight shift in messaging. The march will be as much about justice as it is for peace, and Green says that message is inherent to the concept of achieving peace, and rooted in longtime calls for an equitable society.

"We know that without justice, there can be no peace. The whole angle is, there are so many people out there working in the community, doing amazing things to restore our neighborhoods, to restore families who have been impacted by the justice system," Green said. "Well, we can't ask for people to act peacefully within a violent system."

Injustice takes many forms, she said, and the organization wants to see concerted efforts to increase in nutritional access justice, housing justice, and mental health awareness. Community groups are already attempting to tackle those issues, he said, but their work isn't achievable without aid from the government to help reach their goals.

"We really need the support, and the funding and the resources that our city government has. They have choices to invest in many different places, and we're asking them to invest in us," she said. "There are so many issues that people are working on right now, and we all just want to lift up the messages of what people are fighting for, what people are working on, and ask the city to join us and support our efforts, and not try to solve the problems of Wilmington crime on their own, without talking to the people who are actually experiencing it."

As part of that effort Green said Wilmington Mayor Mike Purzycki and members of his administration have been invited to attend, by way of a publicly issued letter, included below. The rally kicks off at 3:30 p.m. on Sunday, October 10, 2021, at 18th Street and Baynard Boulevard. Those who attend will then march to Rodney Square. 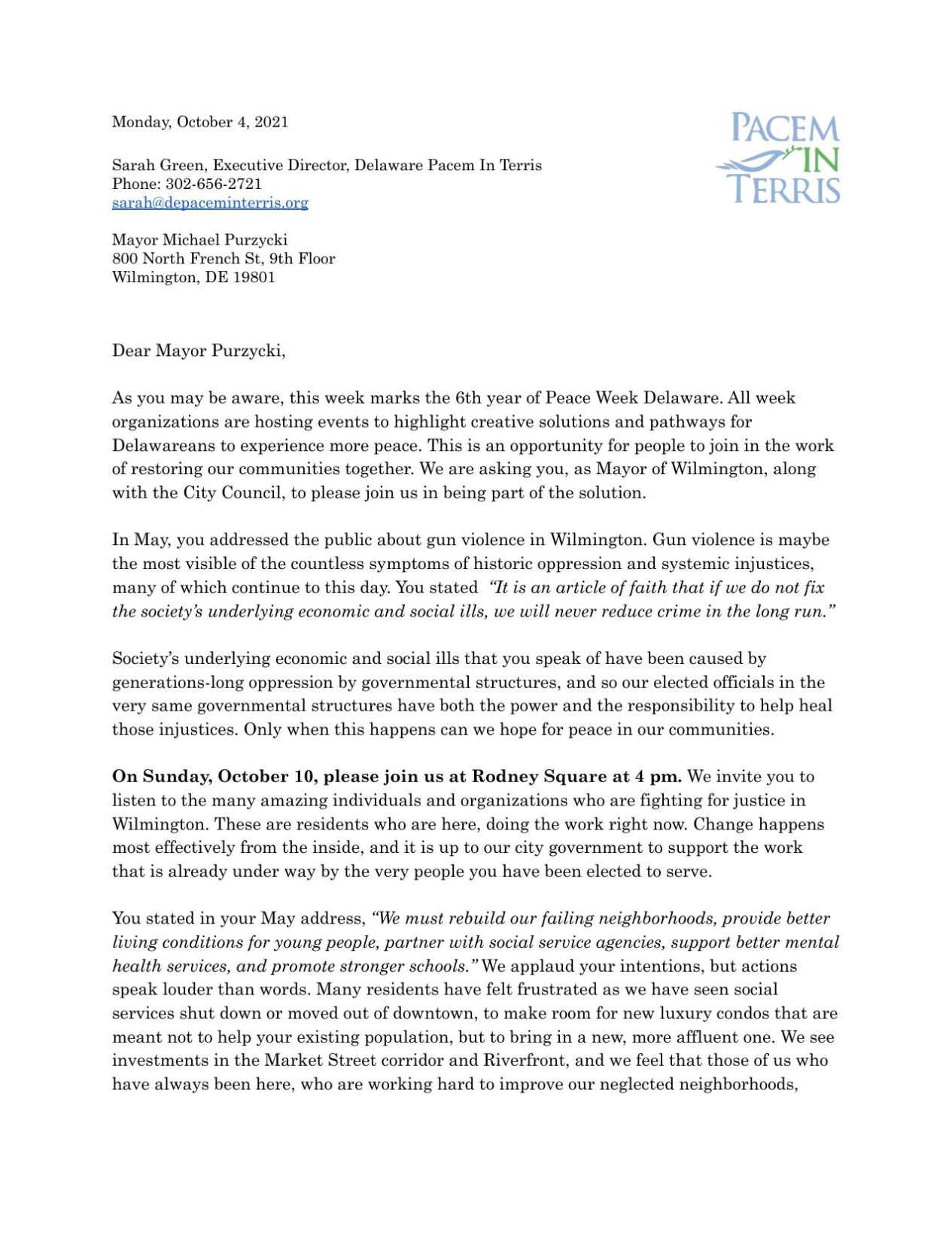 She hopes officials will find the event important enough to attend, and pointed to the increasing levels of violence witnessed in the city as the world pulled itself beyond the challenges of the COVID-19 pandemic.

"I think that the pandemic really just shined a bright light on all of those injustices and obstacles that have always been there. I mean, it really just highlighted it in a way that it can't be ignored anymore, or it shouldn't be," Green said. "All of the underlying systemic problems were already there. Now, they're just made worse. So, for me, I think this is an ideal time to start this work, because there's a public eye on things that have been going on for so long, but to have just been ignored, have been able to be swept under the rug. Now, you're really looking at it, and to continue ignoring it just takes another level of carelessness."