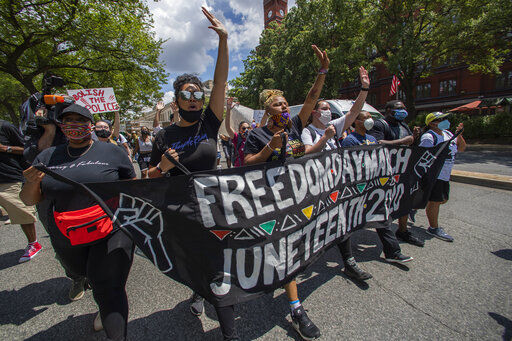 Protesters march towards the Martin Luther King Jr. Memorial in Washington on Friday, June 19, 2020, to mark Juneteenth, the holiday celebrating the day in 1865 that enslaved black people in Galveston, Texas, learned they had been freed from bondage, more than two years after the Emancipation Proclamation. 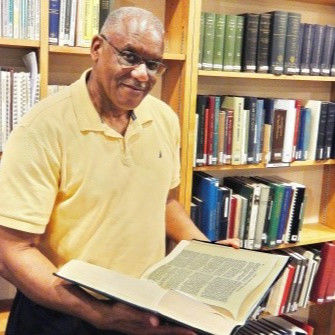 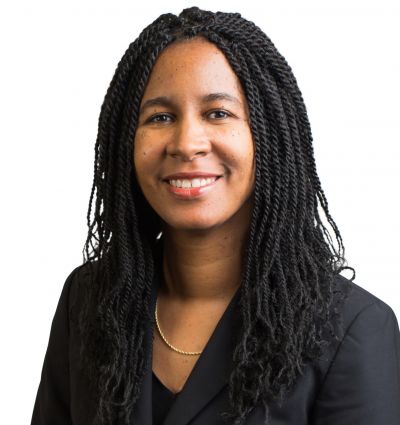 Dr. Donna A. Patterson is chair of the Department of History, Political Science, and Philosophy. She also directs the Africana Studies Program.

Protesters march towards the Martin Luther King Jr. Memorial in Washington on Friday, June 19, 2020, to mark Juneteenth, the holiday celebrating the day in 1865 that enslaved black people in Galveston, Texas, learned they had been freed from bondage, more than two years after the Emancipation Proclamation.

For the first time, state, county, and city offices closed to mark Juneteenth, a day that's taking on new meaning amid civil unrest with the Black Lives Matter movement front and center as protests continue across the country in the wake of the police killing of George Floyd in Minneapolis.

"It's both surreal and gratifying to see this holiday being accepted and really promoted in this way throughout Delaware, but also in the nation as a whole," said Dr. Donna Patterson, chair of the Department of History, Political Science, and Philosophy. "This current mood of the country, it's a great symbol of liberation and freedom because I think as you're seeing the protests, black folks are saying: 'Yes we're free, but we don't have all of our freedoms....are we free not not be shot?'"

Patterson was one of a panel of speakers on a Facebook Live, hosted by Governor Carney's office to mark June 19, 1865, which commemorates the symbolic end of slavery in the US as the date that enslaved black people in Galveston, Texas, learned they had been freed from bondage, more than two years after the Emancipation Proclamation.

But as a border state, the Emancipation Proclamation didn't free slaves in Delaware. The 13th Amendment did that.

"When did slavery end? Well, it didn't end in Delaware until the 13th Amendment was ratified, so it was six months after Juneteenth, and so this becomes part of the story, when talking about the significance of Juneteenth. Juneteenth, again, has taken on its own definition, or its own life, and it is being celebrated as the end of slavery. I think everyone has bought into that regardless of the 13th Amendment...everyone has bought into this is the day, we're going to celebrate the end of slavery. I, again, buy into that because we as a nation should have a celebration of an end to this terrible period in history," said local historian Syl Woolford.

While slaves were legally free, they didn't have many rights. Delaware didn't ratify the 13th Amendment until 1901, Dr. David Young, executive director of the Delaware Historical Society, pointed out.

"So it's not the first state in all things constitutional," said Young.

In 1860, the last time there was a full census before the Civil War, there were just shy of 1,900 slaves in Delaware, the majority of them in Sussex County. Nearly 20,000 African Americans were free in Delaware as well.

"So the implications of not ratifying until six months after...so those enslaved Africans became free, Syl Woolford said in December of 1865, but the state didn't formally ratify the 13th, 14th, and 15th Amendments until the 20th century, which in part had to do with not giving black citizens the right to vote," said Young. "It meant that the power of the slave owners, remained in many ways, as far as educational policy, which kept a segregated school system in place for over a century; it mean blacks could not serve on juries and enjoy the rights of citizenship, such as voting...it also meant that in the aftermath of the Civil War, as a border state, Delaware was not required to report incidents of racial violence to the federal government...so Delaware did not report its lynchings or incidents of racial terror against black Delawareans."

Patterson is a bit torn whether she wants to see Juneteenth become a federally recognized holiday.

"I would love to see it...but then what does that look like? Will that change the essence of Juneteenth--the way that we see it now?" she asked. "Once it becomes a major holiday, and consumerism that could potentially come with that, will it shift and morph into something else? So I think that if that is the case that people would try to hold it to the...way that we see it, the way that it's been celebrated, and the way people rally around it now in terms of using it to really support and bolster some of the additional freedoms that they're searching for now in this."

Dr. Young adds the death of Floyd and other instances of racial violence, bring to the forefront, our need as a nation to finally confront and address racial inequities.

"The inequity in education, the access to the vote and voting rights, the ability for people to have equal justice and equal representation before the law, among many other things--wage and job opportunities--have been affected, in part, because of wage disparities in history, and that has consequences for how value is passed on from one generation to another, and African Americans haven't had the advantages that many others...have."

To confront these issues, Young said we'll have to get out of our comfort zones.

"These things are with us, the history hasn't gone away, and the more we embrace it through conversation, through dialogue, and the consideration of other perspectives...history depends on where you're standing, and understanding people and their own sense of history, but also offering opportunities to discuss the perspectives that may not have occurred to us because we don't know everything we can know about the past."

Last week, city of Wilmington officials removed its statues of Christopher Columbus and Caesar Rodney, who was a slave owner, in anticipation of potential damage, but also to spur conversation.

"The statues may go away, but statues aren't history. They're expressions of the values of the community at a select point in time, and our values change the more we understand the history, and therefore, we can see an evolving sense of history...together," said Young.

How you can commemorate Juneteenth in Delaware:

The Delaware Juneteenth Association and Simpson UM Church are coming together Friday at 7 p.m. to host a virtual service, presided over by Rev. Pearl Johnson. It will also feature a panel discussion, Juneteenth and the Legacy of African-American Trauma.

A community celebration was also held at William Henry Middle School in Dover from noon to 6 p.m. Friday.

Saturday, Black Lives Matter will hold a peaceful protest at 11 a.m. in Rodney Square with a march that begins at noon to Compton Park.